Wall Street slid on Friday after solid job growth and a drop in the unemployment rate last month raised the probability the Federal Reserve will to stick to jumbo-sized interest rate hikes, while a revenue warning from Advanced Micro Devices hit chipmakers.

The report also showed the jobless rate fell to 3.5% in September, lower than expectations of 3.7%. Traders now see a 92% chance of 75 basis-point hike by the Fed, up from 83.4% before data.

Aggressive rise in borrowing costs have stoked fears of slowing economic growth and a hit to corporate profits, but with the labor market remaining tight, the Fed was likely to continue with its monetary tightening plan. 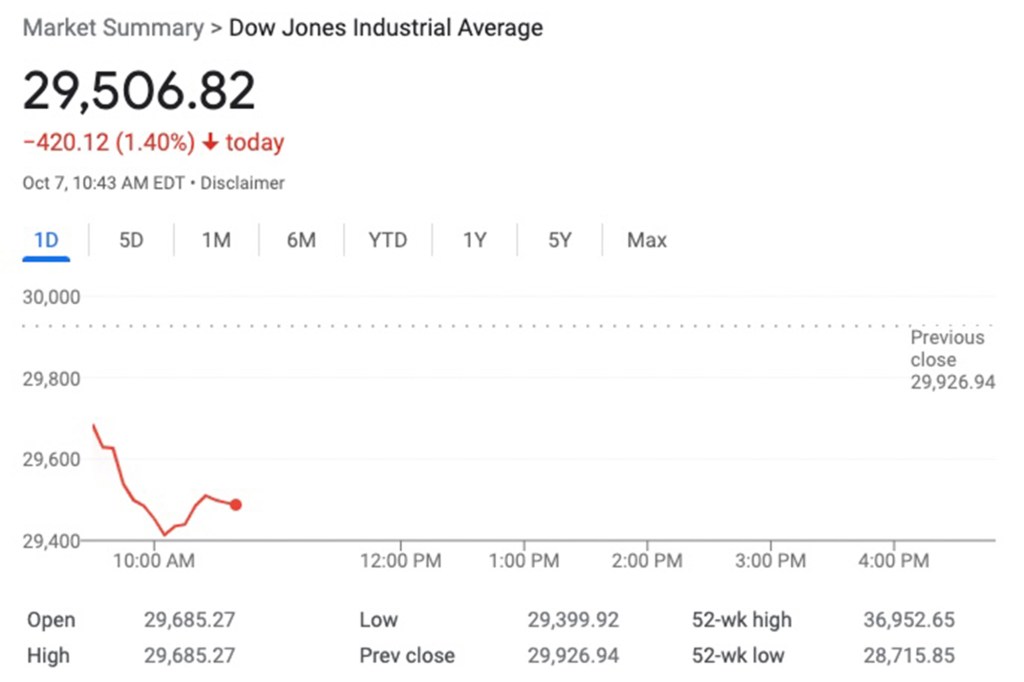 “The markets are worried that the Fed is going to rely on information like this that’s really a month old and they’re going to overshoot and kill the economy,” said Kim Forrest, chief investment officer at Bokeh Capital Partners.

“Investors don’t have confidence in a soft landing because the Fed continues to have to ramp higher and higher to begin to slow the economy down.”

The Philadelphia Semiconductor SE index shed 4.2%, and was set for its biggest one-day percentage decline in nearly a month as a revenue warning from Advanced Micro Devices Inc signaled the chip slump could be worse than expected.

AMD fell 7.97% as its third-quarter revenue estimates were about a billion dollars less than previously forecast.

“People who had been hoping for some kind of turnaround in the chips are starting to give up that hope,” said Robert Pavlik, senior portfolio manager at Dakota Wealth in Fairfield, Connecticut.

All three main Wall Street indexes are still set to snap a three-week losing streak, heading for their biggest weekly gain in almost a month.

With the benchmark 10-year Treasury yield rising to 3.8875%, most rate-sensitive technology and growth stocks such as Alphabet Inc, Amazon.com, Apple Inc , Microsoft Corp fell between 2.25% and 3.92%.

Harry and Meghan documentary series drops after hints at revelations

Cam Reddish denies he is seeking a trade from Knicks

Putin Says War in Ukraine Not Over, Claims No Additional Soldiers Needed

Herschel Walker, thrown for a loss that also hurts Trump and Senate Republicans

‘Crypto Is Anything But Private.’ An Author Examines Crime on the Blockchain

Mother shaken after learning teen son was threatened by alleged NYC killer: ‘He would have hurt him’