ED seeks details on Vikas Dubey's assets, to probe his properties and investments

Following Vikas Dubey's encounter, the Enforcement Directorate (ED) has written to the IG range of Kanpur Police, seeking information about about the gangster's assets and property. 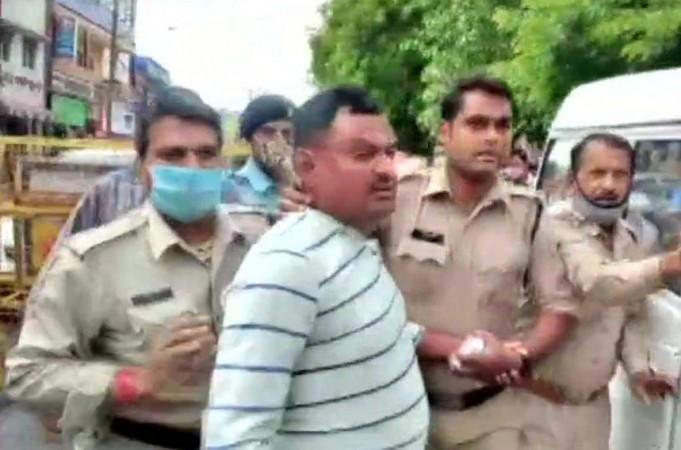 In a new development, on Saturday (July 11), the Enforcement Directorate (ED) wrote a letter to the Kanpur IG Range, seeking details about the gangster Vikas Dubey's properties and assets. The ED is to probe the gangster's investments who was killed on Friday in an encounter.

Vikas Dubey's death has created ripples in India after he was shot dead, the police claim the gangster was trying to flee in an overnight journey from Ujjain in Madhya Pradesh after his car was overturned on the stretch on the outskirts of Kanpur.

UP gangster Vikas Dubey's death has created a stir after the encounter on the outskirts of Kanpur. The gangster faces 60 criminal charges. On 3rd July in an encounter 8 policemen were killed while trying to arrest Dubey and his associates. Arrested on 9th July, on 10th July the gangster was shot dead in an encounter after snatching a gun from a policeman and was killed in a retaliatory fling the Kanpur Police had reported.

The Enforcement Directorate has now launched a probe into his properties under the Prevention of Money Laundering Act, 2002. This will include the properties he owns abroad, his investments and other assets. The assets of his close association will be probed as well. 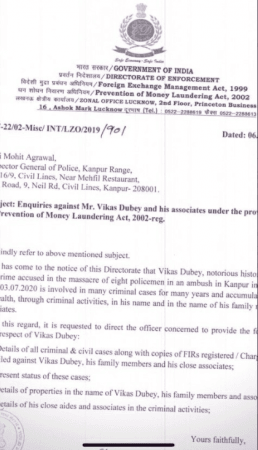 The ED has written to the Kanpur IG Range seeking information including the FIRs and charges filed against him. According to reports, the gangster owned properties in UAE, and bungalow in Lucknow as well. He reportedly owns 11 houses and 16 flats in UP alone. Intelligence has reason to believe that Dubey was laundering money for businessmen therefore his assets will be probed.

Brih is scheduled for the Manchester City – Real Madrid match. Zweier will judge the Juventus-Lyon game
Fulham returned to the Premier League, earned 135 million pounds and destroyed the fairytale of Brentford. Everything was decided by the trick of the defender and a stupid mistake of the goalkeeper
Fabinho: this Liverpool will be remembered forever. The title in the Premier League is special, because we had to wait so long
Tuchel asked PSG to buy Alaba from Bayern. The player wanted to receive 20+ million euros a year
Messi-Casillas: you are an incredible goalkeeper. It was a beautiful rivalry that made you overcome yourself
Ferran Torres: Ronaldo was the best. He is an example for everyone who wants to achieve the maximum in football
Barcelona cannot agree with Ter Stegen on a new contract. The goalkeeper wants to stay
Source https://www.ibtimes.co.in/ed-seeks-details-vikas-dubeys-assets-probe-his-properties-investments-824240

Poll: Voters much more likely to trust family, Fauci than Trump on vaccine

‘We have to get rid of Trump’: Pro-Bernie group launches effort to boost Biden

Column: Trump’s right, schools must reopen. We just need kids to promise they won’t get the coronavirus.

Column: Hate that mask? You’ll like it better if you turn it into a story.

How Influencers Are Using Acne to Sell Things

Welcome to These 23 Surprising Facts About The O.C., B--ch!

Fact Check: No, it wasn't MOAB or nuclear blast in Beirut

NFL's Top Doctor On How Football Plans To Return

One pilot brings the world to Iceland

Why N.Y.C. Has a New Health Commissioner

HSBC bet the bank on China. It's in big trouble if tensions escalate

Weed is not good for your heart, studies say

Biden announces largest ad buy ever by a presidential candidate

Business and Racial Inequality: A Discussion

Wayne: Worthy pulls ahead of Burton-Harris

Another cruise ship in Norway stalled amid infection fears

Anderson Cooper: ‘Have You Ever Heard Someone Whine As Much’ As Donald Trump?

Coronavirus updates: US daily case count shoots back up over 50,000

Militants attack in Indian Kashmir as it locks down for anniversary

5 Minutes That Will Make You Love 21st-Century Composers

Tennessee Republicans, Once Moderate and Genteel, Turn Toxic in the Trump Era

See for Yourself: How Airplanes Are Cleaned Today

Donna Brazile: Biden would benefit by picking a Black woman for VP — and so would America

Wanted: Young People To Work The Polls This November

Americans Back Trump On Immigration — But Only To Stop COVID-19, Poll Finds

If Public Schools Are Closed, Should Private Schools Have to Follow?

Trump and the Republicans Are Risking an All-Out Depression

So You Want to Volunteer in a Coronavirus Vaccine Trial

Business Interrupted by the Pandemic? Your Insurance Is No Good

Will Bill Barr Try to Help Trump Win the Election?

COVID-19 may have lasting effects on some children's brains

We Need to Talk About ‘Indian Matchmaking’

A Teacher Weighs Her Options

15 Takes on the Semi Future

After testing Covid positive, singer SPB says, 'Don't bother to call me to find out how I am'