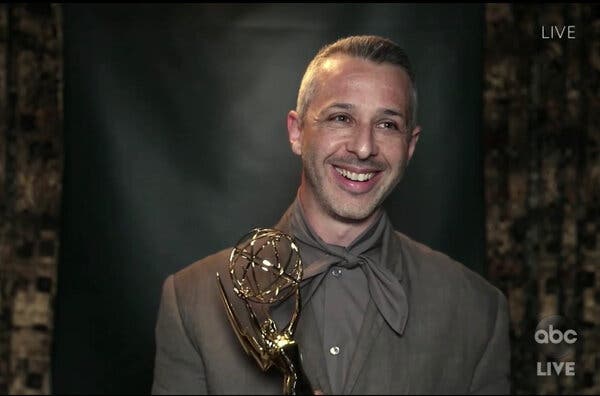 Jeremy Strong won honors for best actor in a drama for his performance in “Succession” as the tortured scion of a media dynasty.Credit...ABC

“Succession,” HBO’s chronicle of a treacherous, ultrarich media dynasty, won best drama series at the 72nd Emmy Awards on Sunday. It was the fifth time in the last six years that HBO has taken television’s most prestigious prize, and the win helped give the cable network bragging rights over its main Emmys rival of recent years, Netflix.

Jeremy Strong was honored for his performance as the show’s tortured scion, and the show’s creator, Jesse Armstrong, won for writing.

Going into the ceremony celebrating the year’s achievements in television and streaming, Netflix had 160 nominations, more than any other outlet. But HBO ended up winning 30 awards overall, the most of any network or streaming platform, thanks, in part, to “Watchmen,” the ambitious mini-series that picked up 11 awards, including the one for best limited series.

Adapted by Damon Lindelof from a graphic novel, “Watchmen” grappled with white supremacy and police brutality before those topics dominated the news in the wake of the police killing of George Floyd. Regina King, who played the masked hero in the series, won in the best actress category, her fourth Emmy.

John Oliver’s “Last Week Tonight,” an HBO stalwart that has been consistently critical of President Trump, took the best variety talk series for a fifth straight year. And in one of the night’s biggest surprises, Zendaya won best actress in a drama for her role in HBO’s drug-fueled series, “Euphoria.”

Zendaya receiving the Emmy for best actress in a drama.Credit...ABC Television

HBO’s triumphs aside, the night was arguably stolen by the big-hearted Canadian comedy “Schitt’s Creek,” a show that had its final episode in April. The series, created by Daniel Levy with his father, the actor and writer Eugene Levy, won all the comedy awards during the Sunday telecast. The comedy sweep was an Emmys first, according to a Television Academy spokesman.

That was one of few bright spots for Netflix at the ceremony.

The streaming service with 193 million subscribers worldwide has been nominated for best drama for eight consecutive years — and once again ended up without a win in a category that included three of its programs (“Ozark,” “Stranger Things” and “The Crown”) among the finalists. Netflix was also shut out for the top comedy honors, with not enough academy voters going for “Dead to Me” and “The Kominsky Method.” All told, the platform won 21 Emmys during a week of awards that included the Creative Arts Emmys in the days before the Sunday night show.

It’s was a big finish for ‘Schitt’s Creek,’ sweeping every comedy award.

Eugene Levy accepted the first acting Emmy of his career, for best actor in a comedy.Credit...The TV Academy and ABC Entertainment, via Associated Press

“Schitt’s Creek” dominated the first hour of the broadcast, and its cast members received plenty of screen time while celebrating during a viewing party in Toronto, not far from where the show is made. Daniel Levy won four Emmys: for writing, directing, best supporting actor and for best comedy. That haul was the biggest for anyone during the Emmys’ prime-time telecast, a Television Academy spokesman said.

“Oh no, oh no,” Levy said, as he accepted the award for best supporting actor, his third of the night. “The internet’s about to turn on me. I’m so sorry.”

The show’s stars — the longtime colleagues Catherine O’Hara and Eugene Levy — won best acting in a comedy honors for their husband-and-wife roles on the show. The wins were their first at the Emmys since the early 1980s, when they were honored for their writing on the groundbreaking comedy series “SCTV.”

O’Hara thanked the Levys for giving her the chance “to play a woman of a certain age — my age — who fully gets to be her ridiculous self.”

To round it out for program’s fictional Rose family, Annie Murphy won for best supporting actress in a comedy.

Regina King won the award for best actress in a limited series for her portrayal of Sister Night in “Watchmen.”Credit...ABC Television

“Mrs. America,” FX and Hulu’s chronicle of the feminist movement (and counter-movement) in the 1970s, seemed to be the main competition for “Watchmen” in the limited series category. Both shows were of the moment in their close attention to social issues, but Lindelof’s comic-book tale won over the Television Academy at the end of a summer of civil rights protests.

In her acceptance speech, King implored viewers to vote in the coming election and paid tribute to Ruth Bader Ginsburg, the Supreme Court justice who died Friday. She delivered her remarks while wearing a T-shirt that honored Breonna Taylor, a Black medical technician in Louisville, Ky., who was killed by police in March.

It wasn’t a complete sweep for “Watchmen.” Uzo Aduba, who played Shirley Chisholm in “Mrs. America,” won best supporting actress in a limited series. It was the third Emmy for Ms. Aduba.

Because of the pandemic that has killed nearly 200,000 Americans, the broadcast, on ABC and Hulu Live, looked nothing like ceremonies of years past. The red carpet was canceled, and actors gathered in their homes, among the friends and family members who belonged to their pandemic pods, rather than crowding together in an auditorium to witness the unsealing of the envelopes.

The ABC late night host Jimmy Kimmel kicked off the proceedings from a nearly empty Staples Center in downtown Los Angeles. “Welcome to the Pand-Emmys,” he said at the top of the show.

In the opening moments, the host appeared to deliver his jokes to a live audience — but it was footage of crowds from past shows that made it seem as if Oprah Winfrey, Michael Douglas and Jon Hamm were laughing at his remarks.

Kimmel eventually gave up the bit to reveal that he was facing empty seats, some of them filled with cardboard cutouts of television stars. “Of course we don’t have an audience,” he said. “This isn’t a MAGA rally.”

More than 100 nominees watched his monologue — and would soon broadcast themselves — from far-flung locations ranging from Berlin to Fayetteville, Ga.

In an effort to make the broadcast go as smoothly as possible, the Television Academy had sent a kit to each nominee with instructions on how to put together a D.I.Y. studio. It came complete with a ring light, a microphone, a laptop and a camera.

Several presenters — including Jennifer Aniston, Tracee Ellis Ross and Jason Bateman — joined Kimmel on a stage built above the Staples Center basketball court. The show had been moved from its usual spot, the Microsoft Theater, to the home of the Los Angeles Lakers and Los Angeles Clippers, because the arena has the technological wherewithal to accommodate dozens of remote feeds.

Although the video quality ranged from high to low, there were few technical glitches.

ABC and the Television Academy are hoping that the makeshift quality of the broadcast provided a ratings boost to a show that had grown stale in recent years. Despite the recent boom in scripted entertainment, ratings for the Emmys have declined sharply.

The broadcast drew 6.9 million viewers last year, a low. And on Sunday it faced competition from “Sunday Night Football” and the N.B.A. playoffs.

Carrera about the fight with Livaya: Utter nonsense
Levandovsky has 9 goals after 5 rounds. 14 Bundesliga clubs have scored less than that
Fati is the youngest goalscorer in the Clasico. He broke Raul's 1995 record
Ramos is playing his 31st match against Barca for Real Madrid in La Liga. He repeated the record of Raul and hento
Pep Guardiola: Manchester City lost 7 points - that's a lot. But problems arose for various reasons
Sandro Schwartz: Dynamo played intensely and scored 3 goals. We wanted to be more active in the attack
The tour in Italy started with a cool comeback with 6 goals. But it was difficult to see, because the main star was a dense fog
Source https://www.nytimes.com/2020/09/20/arts/television/emmy-awards.html

How The Epoch Times Created a Giant Influence Machine

Buccaneers’ Bruce Arians wanted nothing to do with Antonio Brown

Biden pushes back on Trump: 'Crass' to go after political rival's children

Louisiana National Guard dispatched to prevent cyberattacks ahead of election

Lizzo tells David Letterman: ‘I’m sick of being an activist just because I’m fat and Black’

Save up to 40 percent on Le Creuset staples at Amazon

How the country's law enforcement is bracing for Election Day

‘We don’t speculate’: How AP counts votes and calls races

How to Watch UFC 254: Khabib vs. Gaethje Live Stream and Fight Card

Column: They're young and don't love Biden, but can't take any more of Trump

Stream It or Skip It: ‘Christmas Tree Lane’ on Hallmark Movies & Mysteries Is Exactly What You Want from One of These Movies

In Defense of ‘The Great British Baking Show’ in 2020

Future Tense Newsletter: Are You Sure Section 230 Is What’s Bothering You?

Cheap Trick’s ‘Out to Get You! Live 1977’ Is a Gloriously Raucous Blast From the Past

Why many in this country want to kill their constitution

Trump casts his ballot in Florida, braces for marathon weekend of rallies 10 days before election

The media promised to do better after Trump’s 2016 win — instead, they got worse

Trump to Travel to 3 States as Biden Focuses on Pennsylvania

Voter advocates hoping to stave off intimidation at polls

The 2020 census count is done, but the fight over the results is just beginning

Donald Trump's $200 bribe to seniors won't make it for Election Day, and may be illegal

Seven shot, one killed in overnight shootings in NYC

Lou Dobbs goes after Lindsey Graham: 'I don't know why anyone' would vote for him

'All talk, no action' defense likely in Michigan kidnap case

Illinois officer who shot Black couple in Chicago suburbs, killing one, has been fired

Voter turnout among Puerto Ricans rising, not necessarily because of Maria: Experts

Trump to vote in Florida on Saturday before holding three rallies

Stream It or Skip It: ‘Christmas Unwrapped’ on Lifetime Starring Amber Stevens West as a Reporter with No Holiday Spirit

In a toss-up Central Valley district, Republicans and Democrats wage a vicious campaign

Wealthy Millennial Women Tend to Defer to Husbands on Investing

AstraZeneca resumes US COVID vaccine trial, next week J&J prepares to do same