Fighting an Uphill Senate Re-election Battle, Doug Jones Does It His Way

WASHINGTON — Politically endangered lawmakers about to face voters often find themselves tempering their instincts, breaking with their parties on tough votes to prove independence and placate constituents, and offering mealy-mouthed platitudes on the most divisive topics of the day.

His first television advertisements of the year featured him using stark, stirring language to talk about the death of George Floyd, a Black man, in police custody and promote mask wearing. He voted to impeach President Trump and declared on the Senate floor that “Black lives matter.” He has blasted as “shameful” Alabama’s law criminalizing abortion in almost all cases, and suggested raising the age requirement to purchase a gun from 18 to 21.

And on Monday night, just over a week before Election Day, he joined the rest of his party in voting against Mr. Trump’s nominee to the Supreme Court, Judge Amy Coney Barrett.

“These are all things a lot of people felt like wouldn’t be politically expedient for him,” said Chris England, the chairman of the Alabama Democratic Party. “I don’t think that’s necessarily something he concerns himself with.”

The odds that voters will return Mr. Jones to Washington and reject his Republican opponent, Tommy Tuberville, a former Auburn University football coach who has pledged fealty to Mr. Trump, are even more unlikely than those he beat in 2017, when he jolted the political establishment with an unexpected victory over Roy S. Moore, who was accused of sexually assaulting and pursuing teenage girls.

But instead of tiptoeing around the Senate as so many politically embattled lawmakers past and present have done, skittering away from reporters when asked about hot-button issues or giving tortured explanations of tricky votes, Mr. Jones has appeared almost liberated by his predicament.

In an interview, Mr. Jones insisted that he was posed to beat the odds again in his deeply conservative state. But if he is facing his final curtain in the Senate, he is determined to do it his way.

He did not meet with Judge Barrett to discuss her nomination, even as some of his Democratic colleagues did. He unloaded in an interview with local reporters on the push to confirm a nominee before the election, calling it a “political power grab” that he refused to “have any part of,” and rebuking Senate Republicans for prioritizing it over other business.

Some of his most striking political choices came after Mr. Floyd’s death and the rise of the Black Lives Matter movement, a topic many moderate Democrats have gone through contortions to avoid.

“Somebody’s got to speak out,” Mr. Jones said of his decision to publicly address the movement. “And if you base the calculation only on whether it will win you an election, then you will never, ever do it.”

“That’s the problem that I’ve seen with so many Democrats from the South: The calculation was based not on helping the state or the country, but whether or not it helps the particular election,” he continued. “This is a much bigger issue than one Senate election in the state of Alabama.”

Even before he was elected, Mr. Jones straddled the demands of party loyalty and reaching across the political aisle. But on some issues, he has stepped out squarely on his own.

Best known for prosecuting two Ku Klux Klansmen responsible for the 1963 bombing of Birmingham’s 16th Street Baptist Church, Mr. Jones has long been preoccupied with the gap between how things are and how they should be. Born and raised in segregated Birmingham, where his grandfather displayed a figurine of Eugene (Bull) Connor, the police commissioner who used dogs and fire hoses to break up civil rights demonstrations, he is acutely conscious of the symbolic power of elected officials’ bully pulpit.

From the Senate floor, he called the video of Mr. Floyd in police custody an “image of a society and a culture that keeps a knee on the necks of Black Americans through systemic racism and discrimination.”

“I feel like it’s part of my responsibility to try to give people opposing views and to try to help give them as much information as I can that will help educate them for now and into the future. That’s pretty difficult in a partisan world,” Mr. Jones said. “If I don’t say the things that I’m saying, we’re just going to stay stuck in the past. And we’ve got to move forward.” 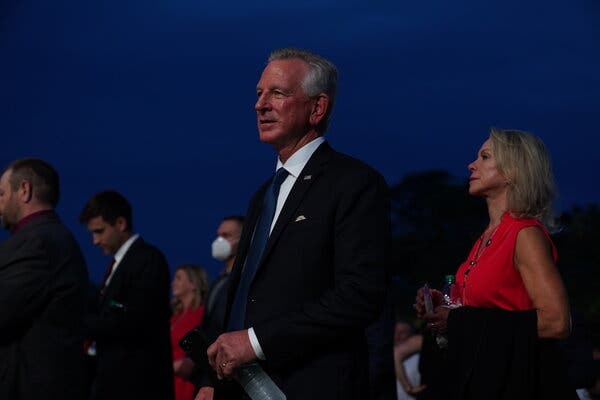 In 2017, Mr. Jones cast himself as a figure of conciliation, and now on the campaign trail, he boasts of the legislation he has sponsored with Republicans and takes pains to note that he votes with Senator Richard Shelby, Republican of Alabama, as often as he votes with Senator Chuck Schumer of New York, the Democratic leader. He kicked off his re-election around the idea of “One Alabama,” pledging not to run a campaign that was “us versus them or good versus evil.”

But public polling has shown Mr. Jones trailing Mr. Tuberville, who has kept a low profile on the campaign trail, in the low double digits. And while he is outrunning former Vice President Joseph R. Biden Jr., the Democratic presidential nominee, Mr. Jones would need a significant number of Republicans to split their tickets in a state where Mr. Trump won by 28 points in 2016.

“Alabama remains a deeply Republican state,” said David Hughes, a professor of political science and pollster at Auburn University at Montgomery. “While Doug Jones has done a really good job positioning himself to outperform those traditional expectations, there’s still a really steep hill to climb to get over the hill as the winner.”

His grim re-election chances, paired with his close relationship with Mr. Biden, have fueled speculation that he could be tapped as attorney general if the Democratic presidential nominee defeats Mr. Trump. At a recent rally in Leeds, he recounted to voters how Mr. Biden, who virtually addressed the crowd, called him late one night in 2017 to encourage him to run for Senate.

But Mr. Jones, for now, is firm that the only perch in Washington he is interested in is the Senate.

Almost as an afterthought, he added, “That’s the answer to that right now.”

Anton Ferdinand on the racist scandal with Terry: I was sent a bullet in the mail. Insults in social networks came every hour
Manchester City have offered 19 million euros including bonuses for 17-year-old Argentine midfielder Sarmiento
Rehagel is a bandit from whom I will not accept an apology. The story of the worst injury in the history of the Bundesliga
Barcelona's presidential election will be held on January 24
Koke: to beat Bayern, you need to play a nearly perfect match. I hope their unbeaten streak ends tomorrow
Loew can return Muller, Boateng and Hummels to the German national team if there are a lot of injuries
Nacho about the Real Madrid game: That's not how titles are won. Working to get better
Source https://www.nytimes.com/2020/10/27/us/politics/doug-jones-alabama-senate.html

Man charged with firing shots at a Chicago police officer

I Went to the Monolith in the Utah Desert

Get $100 off Gobble, a meal delivery kit with dinners that cook in 15 minutes or less

NBA’s Steph Curry to create new brand with Under Armour

Here's a look at how the different coronavirus vaccines work

Attention side sleepers: This on-sale pillow provides the ultimate support for your neck

McConnell: There Is No Reason’ Why Congress Should Not Deliver COVID Relief Before 2021

Ryan Whitaker was murdered by the Phoenix Police for the 'crime' of answering his door.

Saban expects to return to sidelines for Alabama-LSU game

So You Traveled Over Thanksgiving. Now What?

Missing influencer Alexis Sharkey was nude when her body was found: Authorities