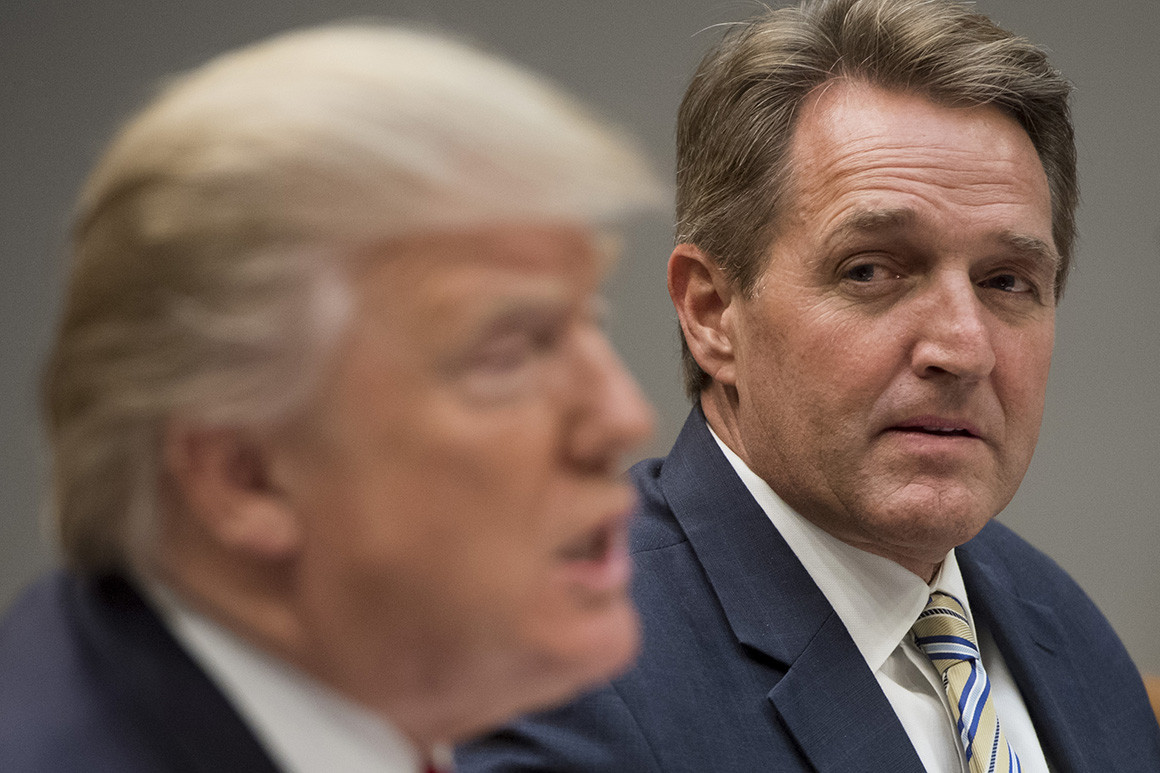 Jeff Flake once said Donald Trump didn’t deserve to win the presidency. He later wrote the book, literally, on why Trump is destroying the GOP.

Now Flake holds the keys to a Supreme Court confirmation Trump prizes dearly — and could soon yank them away.

Flake flashed a yellow light Sunday night on Brett Kavanaugh’s high court bid, telling POLITICO that he won't support advancing the nomination this week if fellow senators don’t do more to hear out a woman accusing the nominee of sexual assault more than three decades ago. Opposition from the Arizona Republican wouldn’t doom Kavanaugh outright, but it already has ratcheted up political pressure on a GOP struggling to keep Trump’s Supreme Court nominee from a full implosion.

Flake is a charter member of the GOP’s anti-Trump caucus, one of only a few senators in the president’s party who freely tee off on the president’s handling of issues from trade to Russia, though they rarely actively undercut his agenda. Another member of that caucus, Sen. Bob Corker (R-Tenn.), also called on Sunday night for a delay in the Kavanaugh confirmation process.

But Flake, unlike Corker, sits on the Judiciary Committee. A "no" vote from him on the narrowly divided panel would force Republicans to bring Kavanaugh to the floor with a negative recommendation, or without a committee vote at all, in order to keep the nomination on track.

And also unlike Corker, Flake’s bad blood with the president runs deep: Trump all but ran the Arizonan out of the Senate by making a primary challenge from the right unavoidable, savaging him repeatedly on Twitter over the past two years as "very weak and ineffective" and "Flake(y)."

“I think it’s too soon to tell, but Flake is the one man with the leverage to do this,” GOP strategist and vocal Trump antagonist Rick Wilson said. “With the one-vote margin on the committee, Jeff Flake has the power to stop Kavanaugh, and to humiliate Trump. Revenge is a dish best served cold, as the philosopher once said.”

Flake made no mention of revenge on Sunday night when he spoke out in favor of a more public airing of the previously anonymous allegation against Kavanaugh, which Christine Blasey Ford stepped forward to share on Sunday. But the president's past treatment of Flake, and the senator's subsequent retirement, at the very least makes it easier for the Arizonan to cross Trump by using his Judiciary seat to apply the brakes on Kavanaugh's confirmation.

How far Flake takes the issue, then, is the biggest question as Trump’s high court pick enters a make-or-break week. Judiciary Committee Chairman Chuck Grassley (R-Iowa) is already working to set up a time for senators to hear from Ford, as well as Kavanaugh one more time.

The 53-year-old appeals court judge has vocally denied Ford’s allegation, and the White House stood by its nominee on Sunday. But even if Flake ultimately backs Kavanaugh, two other Republican opponents would doom the nomination in a Senate divided 51-49. Sens. Susan Collins (R-Maine) and Lisa Murkowski (R-Maine), neither of whom sit on Judiciary, have yet to indicate how they will vote.

"We need to hear from her," Flake told POLITICO Sunday, referring to Ford. "And I don't think I'm alone in this."

Flake isn’t the GOP anti-Trump caucus’ only member on Judiciary: Sen. Ben Sasse (R-Neb.) also has rapped the president repeatedly since Trump took office. But Sasse has said nothing publicly since the sexual assault allegation emerged and his spokesman had no comment on the matter Sunday night.

Before Trump’s election in 2016, Flake also battled conservatives in his own party over the fate of a Supreme Court seat that Majority Leader Mitch McConnell (R-Ky.) held open until after voters went to the polls. While Texas Sen. Ted Cruz urged fellow Republicans to hold the spot open for even longer if Hillary Clinton won the presidency, Flake said then that if Clinton prevailed “I will be actively trying to round up votes” for taking up Merrick Garland's nomination.

In 2016, Flake used his introduction to Trump — then the presidential nominee-in-waiting of their party — to ding the New Yorker for dismissing the heroism of Sen. John McCain (R-Ariz.), a close friend and mentor of Flake. Flake introduced himself to Trump, according to reports at the time, as the senator from Arizona who “didn’t get captured” — a dig at Trump's remark that he liked "people who weren't captured," diminishing McCain's service as a prisoner of war.

After Trump took office, Flake raised some hackles within his party by billing his book, Conscience of a Conservative, as an open rebuttal to the president's politics. Flake also has delivered multiple floor speeches criticizing Trump's bellicose and truth-averse tendencies, warning in January that Trump is "charting a very dangerous path."

Flake had yet to announce his vote on Kavanaugh before the emergence of Ford’s sexual assault allegation, which dates back to when she and the judge were in high school. During his questioning of the nominee during his marathon confirmation hearing, Flake tried to get Kavanaugh to weigh in on Trump’s harsh criticism of Attorney General Jeff Sessions for allowing the Justice Department to pursue indictments of two GOP House members.

“Should a president be able to use his authority to pressure executive or independent agencies to carry out directives for purely political purposes?” Flake asked Kavanaugh.

The nominee demurred, saying that “I don’t think we want judges commenting on the latest political controversy” lest their independence be questioned.

Flake rephrased the question, to which Kavanaugh said that “I respectfully decline” to address “current events or politics.”

Burgess Everett contributed to this report.

Liverpool leads its graduates through life. You'll Never Walk Alone in action
Ararat-Armenia won the Armenian championship for the second season in a row
Barcelona is ready to let Umtiti go. Lazio, Napoli, Roma and Torino are Interested in him
Dembele returned to training on the basis of Barcelona. He hasn't played since November
Milan will buy out Kjaer for 3.5 million euros
22 thousand tests before each match – so Union wants to return a full stadium. One game will cost more than a million euros
Real asked fans not to gather in Madrid to celebrate the championship
Source https://www.politico.com/story/2018/09/16/flake-kavanaugh-trump-revenge-826067

States to get funds from Centre for developing sport they've adopted: Rijiju

Lunch at work may never be the same

Texas man accused of taking $1.1M in coronavirus stimulus for companies with no employees

FDA head 'encouraged' by COVID-19 vaccine progress, says 'not for me to answer' if China withheld info

Myths about credit: Does canceling a credit card hurt your credit score?

How Cakes in Disguise Got Out of Hand

Real Madrid warns fans not to gather in celebration spots

Thousands of protesting Israelis call on Netanyahu to resign

With anti-Catholicism raging, Trump should honor a great American Catholic

GOP may move Florida convention outside as COVID-19 cases soar

Protected: Still on the fence about leaving your house?

Where do Illinois regions stand on positivity rate, hospitalizations and other key coronavirus metrics?

Trump on Black Americans killed by police: "So are White people"

Crime is surging in US cities. Some say defunding the police will actually make it fall

Some of Trump's loyal supporters cling to COVID-19 conspiracy theories

Iranian dissidents to hold summit calling for regime's overthrow, as US ramps up pressure on Tehran

Max Greenfield Gets Real About Parenting In 2020

Banks Stockpile Billions as They Prepare for Things to Get Worse

Stream It Or Skip It: ‘The Business of Drugs’ on Netflix, a Documentary Series About the Ins and Outs of Controlled-Substance Trades

Coping with COVID: Earth is terrible. Let's look to the stars.

Charlie Blackmon returns to Rockies after recovering from COVID-19

Is it possible to get reinfected with the coronavirus?

Navy official: Warship stable, fire could be out in 24 hours

This L’Oréal spokesperson is bringing awareness to FGM

Black Travel Alliance will keep confronting the industry on its racism

Front-line workers get the royal treatment they deserve: See their makeovers

'It's a different world': Tiger Woods' return doesn't mean a return to normal

Yanks’ Tanaka unsure whether he can take 1st rotation turn

Kings’ Barnes isn’t at NBA restart, says he has coronavirus