For Some Muslim Couples, Gender-Separate Weddings Are the Norm

Weddings are usually associated with joyous togetherness, a time for family and friends to celebrate alongside the couple and with each other.

Some communities, though, have their own brand of togetherness. Although considered uncommon in the United States, Muslim couples may opt for gender-separate wedding celebrations, men and women sit separately during the ceremony and celebrate in different rooms during the reception,. because of the strict observance of the hijab, which means veil in Arabic. Rules of hijab both apply to men and women even though it is commonly referred to as a head scarf for women. For men, everything between the navel to the knee should be covered; for women, only her face and hands and sometimes feet is allowed to be exposed.

“The idea of gender segregation in conservative Islamic circles is actually just one expression of a much broader puritanical ideal of social partitioning between genders in Islam,” said Shaykh Dr. Mohammad Omar Hussaini, a pathologist whose spiritual writings can be found on the website Pureway. He explained that the hijab “is not simply a piece of cloth but rather an attitude that desexualizes, and in the process humanizes, our experience as men and women, who are like two aspects of one soul.”

In the Islamic faith, a woman’s hair is seen as her awrah, or part of the body that requires covering outside the home and in front of restricted adult males. “Most women who wear the hijab do so not only because it is a religious duty but also to show modesty,” said Shaykh Amin Kholwadia, the founder of Darul-Qasim, an Islamic seminary based in the Glendale Heights suburb of Chicago. “Some women may wear the hijab as part of an identity culture.” 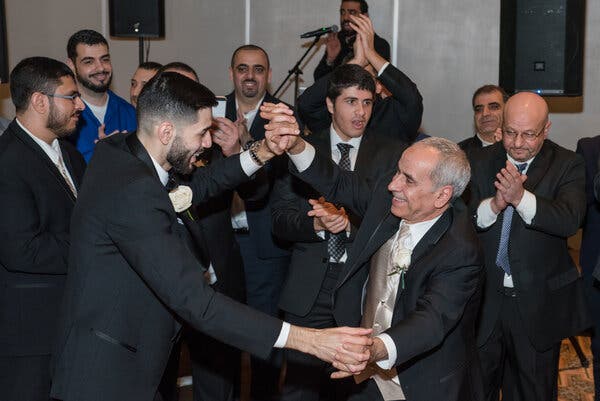 The groom, Musstaffa Shelo, dances during a private celebration with the men. Credit...Sami Studios

Runna Othman, 26, a talent acquisition specialist who has been observing hijab for nearly two decades, had a gender-separate wedding when she married Mussttafa Shelo, also 26, a financial analyst in Chicago, on Dec. 17, 2017 at Drury Lane Theatre in Oak Brook, Ill. “Although you can act modestly at a traditional wedding, undoubtedly, I wanted a space where women can just celebrate without any barriers,” she said. “At celebrations, especially big Arab weddings with hundreds, sometimes even upward of 1,000 guests, it is hard to maintain a modest composure.”

Ms. Othman and the women who celebrated with her were able to let their hair down and forgo their hijabs and dress in ornate gowns that were less modest. “I did not want to wear a hijab on my wedding,” she said. “I wanted to wear a sleeveless gown and to do my hair and makeup. This would not have been possible if I were to have to keep my hijab on during a traditional wedding that wasn’t separated.”

Ms. Othman added, “While Muslim fashion has come a long way to include beautiful modest gowns, sometimes a girl just wants to dress immodestly, if we’re being frank.”

During her celebration, she said, the women guest were also able to “dance, we sing, we join hand in hand to do debke, which many Muslim women would be uncomfortable to do in front of nonrelative men.”

Couples can also celebrate together in a segregated wedding, along with certain male relatives of the bride, including her father, brothers, grandfathers, and maternal and paternal uncles.

The bride, Saleha Amreen, and her guests are not allowed to show their faces (even in this photo) without a hijab. The women celebrated in a separate room from the male guests on Ms. Amreen’s wedding day.Credit...Ayah Ashraf

Saleha Amreen, 22, a software engineer, opted for a separate wedding when she married Bilal Ghani, 23, a sales engineer, on July 19, 2016 at the Waterford Banquets in Bridgeview, Ill.

“There’s a way to have fun without losing your values,” she said. “You can feel like a princess by getting decked out and not worry about any males looking at you.”

Mr. Ghani shared that on the men’s side, separated weddings are lively celebration where the men engage in traditional dances that wouldn’t have the same luster if women were present. “It always makes you feel like you’re starting your marriage the right way,” he said, as the separate events comes from a place of receiving blessings by complying with Islamic principles.

Danya Alzein, 22, a dental student, managed to have a wedding that was both gender separate and socially distant during the coronavirus pandemic. Her marriage officiation, known as nikah, which is a commitment between the couple to follow Islamic law during their marriage, was initially going to take place in April at a Chicago mosque, but the mosque was shut down because of the virus.

Keeping the date and having an outdoor celebration was not an option given Chicago’s cold weather. Ms. Alzein decided instead to have her marriage ceremony in June as Illinois started reopening. The event was held outdoors at her house with a little over 100 guests, with the men in the front yard and the women in the backyard. Food lines were socially distant and everyone sanitized before and after eating. Masks were also distributed and guests had access to hand sanitizers to prevent the spread of the coronavirus.

It was a very different type of wedding than Ms. Alzein ever could have imagined. But she is grateful that she didn’t even need to get a special hijab made to match her dress since it was only her father, along with her brothers and her new husband and father-in-law who saw her.

“There wasn’t anything I could do when it got changed from April to June,” said Ms. Alzein of her postponed wedding. “It was out of our hands. I knew there was a reason, perhaps some hidden wisdom for the pandemic and that just kept us patient we just took it one day at a time.”

Hans-Dieter flick: I Hope Alaba will sign a contract with Bayern. Our club is one of the best in the world
Diego Maradona: Messi gave Barca everything, brought them to the top. He was not treated the way he deserved
Federico Chiesa: I hope to leave my mark in Juve. We will achieve great results
The Coach Of Benfica: I don't want us to look like the current Barcelona, it has nothing
Guardiola on returning to Barca: I'm happy at Manchester City. I hope to stay here
Fabinho will not play with West ham due to injury
Ronald Koeman: Maradona was the best in his time. Now the best Messi
Source https://www.nytimes.com/2020/09/23/fashion/weddings/for-some-muslim-couples-gender-separate-weddings-are-the-norm.html

Castellanos decides not to opt out, keeps contract with Reds

How to Make D.I.Y. Worry Dolls

Sean Connery Has Died. Friends, Fans, and the Other James Bonds Are Saluting Him on Social Media

Tigers' A.J. Hinch on controversial managerial history: 'I understand how wrong it was'

Shanghai could be the world's biggest IPO market this year. Holding the title will be tough

Stream It Or Skip It: ‘It: Chapter Two’ on HBO, in Which Pennywise the Clown Returns to Not Be as Scary as We’d Like

US Presidential election to significantly impact global economy | Details inside

Steelers bringing gritty style of past into battle vs. rival Ravens

Pierce Brosnan Pays Tribute to Sean Connery: ‘You Were My Greatest James Bond’

Obama skewers Trump while joining Biden on the campaign trail

Biden falls behind Trump in Iowa: Track the race for president in key battleground states

Good News: You Can Sleep For One More Hour Tonight

A Florida fisherman caught a gator he'd been watching for three years. It weighed more than 1,000 pounds

Maxine Waters on Black Trump voters: ‘I will never forgive them’

In quest for Latino votes, Miami early voting site is who's who of Trump, Biden supporters

Haunted upstate castle to be auctioned off on Halloween, bids begin at $25K

Poll: Ernst pulls ahead of Greenfield in Iowa

Police in North Carolina use a chemical spray to disperse a get-out-the-vote rally.

Sean Connery has always been James Bond — and always will be

A decade before James Bond, Sean Connery was a nude model

Latinas are getting slammed in the COVID-19 economy, this week in the war on workers