Fox News Media CEO Suzanne Scott and President Jay Wallace said in a memo to employees that they will be further reducing their workforce in their buildings and operating virtually “wherever possible” throughout the week, after confirming a “few positive cases” at the company.

The memo follows a New York Times report on Sunday that Wallace and several of its anchors, Bret Baier and Martha MacCallum, are being advised to quarantine after possible exposure to a person who later tested positive. They had been on a flight with that person returning from Nashville after coverage of the final presidential debate last week.

In the memo, Scott and Wallace do not name who tested positive or say who will be quarantining, but refer to a few positive cases at Fox News Media. A Fox News spokesperson previously declined to comment because of the need to keep private health information confidential.

Kumail Nanjiani Expresses His Concerns For Surge In COVID-19 Cases: "I Feel Hopeless And Helpless"

“This is a reminder that any employee who tested positive will be quarantining and following all of our mandatory guidelines before they enter any of our buildings,” they wrote.

The positive cases come just as the network is preparing for one of the biggest nights of the year — election coverage. In their memo, Scott and Wallace write, “We know this election will be like no other and it will be exciting to witness it first hand, but only those employees who are critical to that night’s production will be permitted to work from 1211,” they wrote, referring to the Avenue of the Americas street number. “We will have enhanced testing procedures in place and increased safety protocols have been instituted throughout all of our buildings since the start of the pandemic.” 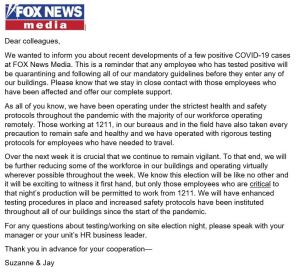 The president of Fox News and several of its anchors and on air personalities were advised to quarantine after possible exposure to COVID-19, The New York Times reported on Sunday.

The exposure came from an infected person who was on a chartered flight from Nashville to New York, the Times reported. The plane was carrying Jay Wallace, the president of Fox News Media, along with Bret Baier and Martha MacCallum, as well as Juan Williams and Dana Perino, and all of those in the flight were advised of the exposure. They had been in Nashville for the final presidential debate on Thursday.

A network spokesperson would not confirm details, and pointed to a statement to the Times that cited the need to keep private health information confidential.

The Times reported that the anchors were expected to appear on air from home.

Fox News, along with other networks, had been limiting in-studio appearances since the start of the coronavirus outbreak.

The Times reported that Fox News staff members were regularly tested in Nashville. The Commission on Presidential Debates also had its own set of requirements for testing before journalists and others attending the event could gain access to the venue.

Ferencvaros defender: Ronaldo waved me off when I asked for his shirt. Maybe it's because he didn't score for us
Klopp on firmino: the Team is an orchestra, and Bobby plays 12 instruments in It. He is important to us
Antonio Conte: I Don't think Real Madrid can cry about their losses. It's funny that the media write about their problems with the squad
Lewandowski on the cancellation Of the Golden ball: it's not that important. Such prizes are something extra
Salah can play with Atalanta. He became ill with the coronavirus
Klopp on injured: no News. I have no idea who will play for Atalanta. Why should we give them information?
Barcelona are thinking about signing Garay due to Pique's injury
Source https://deadline.com/2020/10/fox-news-coronavirus-2-1234603195/

Get funky: Baker Mayfield has been dropping rap lyrics into postgame interviews

With Less Money In Its Red Kettles, The Salvation Army Rallies To Save The Holidays

Trump To Pardon Turkey Again, Trying To Show Normalcy Amid The Abnormal

The best $219 I ever spent: A HEPA filter for my parents

Secret Service agents asked about transferring to Florida to guard Trump after he leaves office: report

Cooperative Competition Is Possible Between China and the U.S.