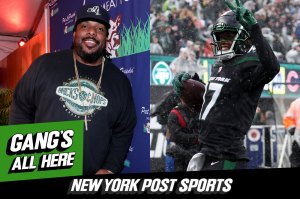 That was the hope come December 1 before the season. The Jets have gone far and beyond that. They were hoping to be “in the hunt” and they are in a playoff spot. It’s been a whirlwind season thus far, but there are still six games to go. None of them will be easy. Four against potential playoff teams and two games against teams that have not been pushovers.

The road to a playoff spot begins in Minnesota against the 9-2 Vikings. Can Magic Mike White keep the good times rolling?

To preview Sunday’s Jets-Vikings game, we bring you a new episode of the “Gang’s All Here” podcast with Brian Costello and me. Former Jets offensive lineman Willie Colon joins the show to discuss the state of Gang Green entering December.