With his team in need of a change in the midst of a rough second period Monday night, Gerard Gallant put two of his lines in a blender and came out with the winning formula.

Alexis Lafreniere and Kaapo Kakko joined Mika Zibanejad on the top line, which was on the ice for two of the Rangers’ three third-period goals — including one from Lafreniere — in a 6-4 win over the Blues at the Garden.

“For me, it made the three lines all better. Hopefully they’ll sustain it, but we’ll see.”

Gallant had been jumbling his lines as the Rangers tried to find the right recipe for success during their recent skid, but Monday’s changes did the trick. The second and fourth lines remained the same while the third line became Chris Kreider, Barclay Goodrow and Jimmy Vesey. 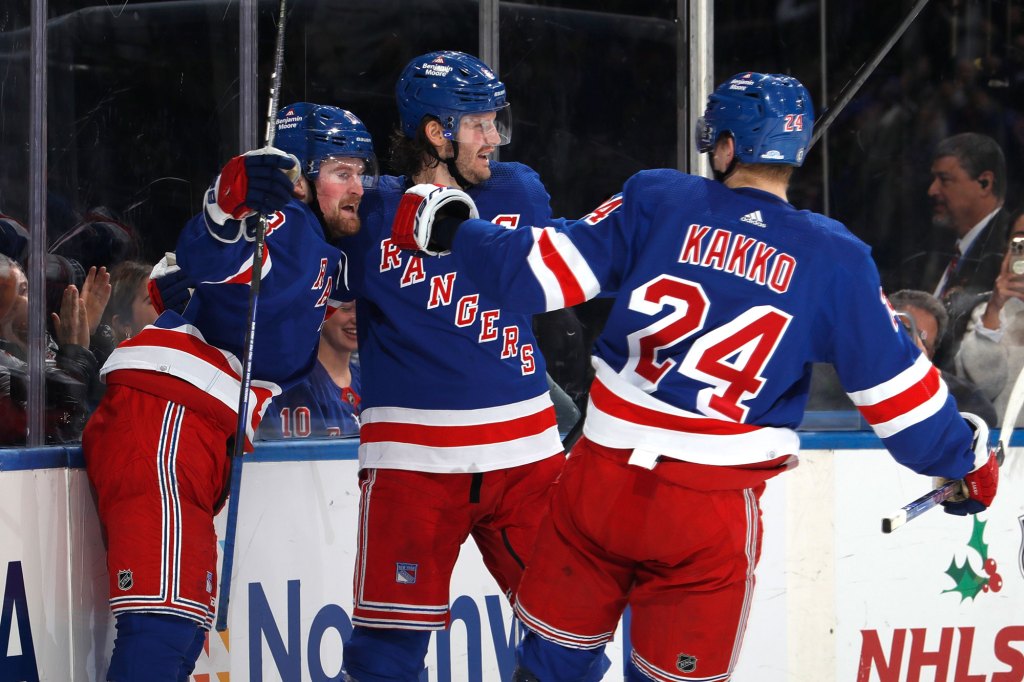 Blackhawks center Andreas Athanasiou was upset with Jacob Trouba after the Rangers defenseman delivered a crushing open-ice hit on him Saturday night.

“That guy is known for hitting high, not really worrying about the puck out there and almost trying to hurt people,” Athanasiou told the Chicago Sun-Times. “That’s his game; that’s what he does. He’s an $8 million man with zero goals, so he has to figure out how to do something when making that much. If you can’t help the team, I guess you try to hurt guys on the other team.”

“The guy’s going through the middle of the ice with his head down and Troubs has a very clean, legal hit,” Lindgren said. “So yeah, I have no idea what he meant by that. But that’s just part of the game. Big hits are part of the game. Especially with Troubs out there, if you got your head down, he’s going to make you pay.”

Filip Chytil missed his second straight game on Monday with a lower-body injury, with Gallant describing him as still “day-to-day.” Jonny Brodzinski was recalled from AHL Hartford and made his season debut, centering the fourth line between Sammy Blais and Julien Gauthier.

Gallant said he expected Chytil to join the Rangers on their two-game road trip to Las Vegas and Colorado that begins on Wednesday.

Igor Shesterkin made 25 saves while improving to 11-4-4 on the year. … Trouba and K’Andre Miller reunited on the Rangers’ second defensive pair after Miller had played with Braden Schneider in the previous three games.