Want to get The Morning by email? Here’s the sign-up.

Good morning. Virus deaths surged over the weekend. The White House is trying to undercut Fauci. And some innovative people are moving activities outdoors. 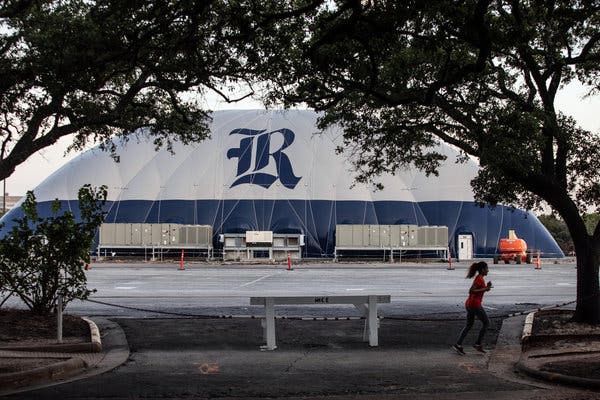 On the Rice University campus in Houston on Sunday.Credit...Erin Trieb for The New York Times

Rice University, in Houston, is building nine big new classrooms this summer, all of them outdoors.

Five are open-sided circus tents that the university is buying, and another four are semi-permanent structures that workers are building in an open field near dorms, Kevin Kirby, Rice’s vice president for administration, told me. Students and professors will decorate the spaces with murals and video projections.

In the fall, the structures will host classes and student activities, while reducing health risks — since the coronavirus spreads less easily outdoors. Kirby describes the construction project as “a statement to the community.” The statement: “We’re creative. We’re resilient. And what we do matters.”

Across the country, many indoor activities are going to be problematic for the foreseeable future: school, religious services, work meetings, cultural events, restaurant meals, haircuts and more. Mask-wearing reduces the risks, but being outdoors can reduce it even more. (Tara Parker-Pope explains the science and offers tips in this recent Well column.)

As Megan McArdle, a Washington Post columnist, has written: “Move everything outdoors — as much as possible and much more than has been done already.” Yes, the weather will sometimes be a problem. But “we’re long past searching for ideal solutions,” McArdle notes. “We’re now hunting for adequate.”

In today’s newsletter, I want to highlight some of the creative ideas my colleagues and I have noticed, like Rice’s:

Do you know of other companies or communities taking smart steps to move activities outdoors? Tell us about it.

1. A safer place to play

The latest sign of how far the U.S. has fallen behind other countries in combating the virus: The N.H.L. announced that it would hold all of its remaining games this year in two Canadian cities. The U.S. isn’t safe enough.

The 24 hockey teams with the best records — 18 of which are U.S.-based — will travel to Toronto or Edmonton for a two-month tournament (without fans), starting Aug. 1. Las Vegas had been a leading candidate to serve as a host city until the recent virus surge across the Sun Belt.

College football, at risk: A growing number of teams have suspended summer workout programs. But many universities are still holding out hope they can play this fall, because, as John Branch writes, football is a major source of revenue for them.

In other virus developments:

2. China and Iran move toward a pact

China and Iran, two top rivals of the U.S., are forging a strategic alliance. The partnership would expand China’s presence in Iran’s telecommunications and other industries, and would supply China with discounted Iranian oil for the next 25 years. The agreement also calls for military cooperation.

Michael Crowley, who covers U.S. foreign policy for The Times, told us: “The more the U.S. works to pressure and isolate China, the less reluctant China will be to fight back — challenging our other strategic interests, empowering U.S. rivals like Iran and undermining a global order that generally works to America’s benefit.”

3. A lesson in police reform

Seven years ago, Camden, N.J., dismantled and then rebuilt its police force. In doing so, the city tried to take a lighter approach to minor offenses and defuse tense encounters. And it seems to have worked, for the most part.

While some problems persist, both excessive-force complaints and crime have plummeted in the city, where over 90 percent of residents are Black or Latino. In recent weeks, dozens of other departments around the country have reached out to Camden to ask for advice.

Here’s what else is happening

The injuries aboard the U.S.S. Bonhomme Richard were not life-threatening, the Navy said.Credit...Bing Guan/Reuters

IDEA OF THE DAY: Too much trust in tech?

Roger McNamee co-founded one of Silicon Valley’s most successful venture-capital firms and was an important early investor in Facebook. But he has soured on Big Tech, arguing that it now promotes hate speech, undermines democracy and profits at society’s expense.

In response, McNamee has written a searing open letter to Biden in Wired magazine:

The tech industry has been transformed into a poster child for income inequality, toxic masculinity, and white privilege. In the era of George Floyd, Silicon Valley’s leaders are the last people to provide you with guidance on technology policy. Their companies and their community should instead be targets for reform …

Technology can and should be a huge contributor to the American economy, but today its culture and business models produce consistently suboptimal outcomes for society. The best analogies are the chemicals industry prior to the Clean Air Act and the pharmaceuticals industry before the Pure Food and Drug Act. Tech companies are profitable because they are not responsible for the harm they cause.

For more: In The Times, Anne Borden King, who has cancer, describes the torrent of ads for dubious treatments that Facebook is feeding her. And for a different view, see Andrea O’Sullivan’s and Tyler Cowen’s arguments that “you are getting a better deal from big technology companies than you realize.”

When the chef and cookbook author David Tanis set out to create a black bean burger, he wanted one that embraced the taste of cooked beans rather than trying to mimic the look and texture of meat.

Think of the result as a particularly tasty version of refried beans. He recommends serving it with a fried egg on top and seasoning it heartily with cumin, scallions and green chile.

Philippe Coutinho: it was unusual to Play against Barca, but I have a contract with Bayern
Bartomeu does not intend to retire after 2:8 from Bayern
Bayern punished Barcelona for an 8-man defense. In this match, Messi was the problem, not the solution
L'equipe put Setien one for 2:8 with Bayern. For the first time, such an assessment was received by a coach
Pozornik! Barca fans met the team at the hotel after 2:8 from Bayern
Bayer's CEO confirmed that Havertz wants to leave the club
Destruction of Barcelona - in gifs from Tiktok Davis. This is better than highlights!
Source https://www.nytimes.com/2020/07/13/briefing/coronavirus-china-iran-kelly-preston-your-monday-briefing.html

The Man Utd teenager who is a superstar in the making

From ancient trees to towering volcanoes, take in scientific wonders at national parks

Biden Faces A Convention Test, To Offer A Vision Beyond Beating Trump

Trump's Attacks On Harris Are A Return To Familiar Territory

The Democratic National Convention Starts Monday. Here's What You Need To Know

The real horror on supernatural drama 'Lovecraft Country' is racism

Stimulus Check Relief for Spouses of Deceased People is Coming

Autoworker shares how Biden announcement launched him to celebrity status

Naagin 5: Check out the massive net worth of Hina Khan, Surbhi Chandna and others

The House Should Investigate and Subpoena Postmaster General DeJoy

This was familiar, but not normal Jets training camp opener

'I have more Indians than she has': Donald Trump takes a swipe at Kamala Harris