An inside look at Sunday’s Giants-Bears Week 4 matchup at MetLife Stadium.

This is a high-level battle. Quinn, 32, is one of the preeminent pass rushers of the past decade, with 102 career sacks. He led the NFL in 2021 with 18.5 and can harass the quarterback by coming around the edge or working inside with his bull rush. Quinn is off to a quiet start this season, with one sack and one quarterback hit in three games. It is up to Thomas to keep him quiet.

Thomas is the top-ranked offensive lineman in the entire league, according to Pro Football Focus, and it will be interesting to see if the Giants feel the need to give him much help dealing with Quinn. 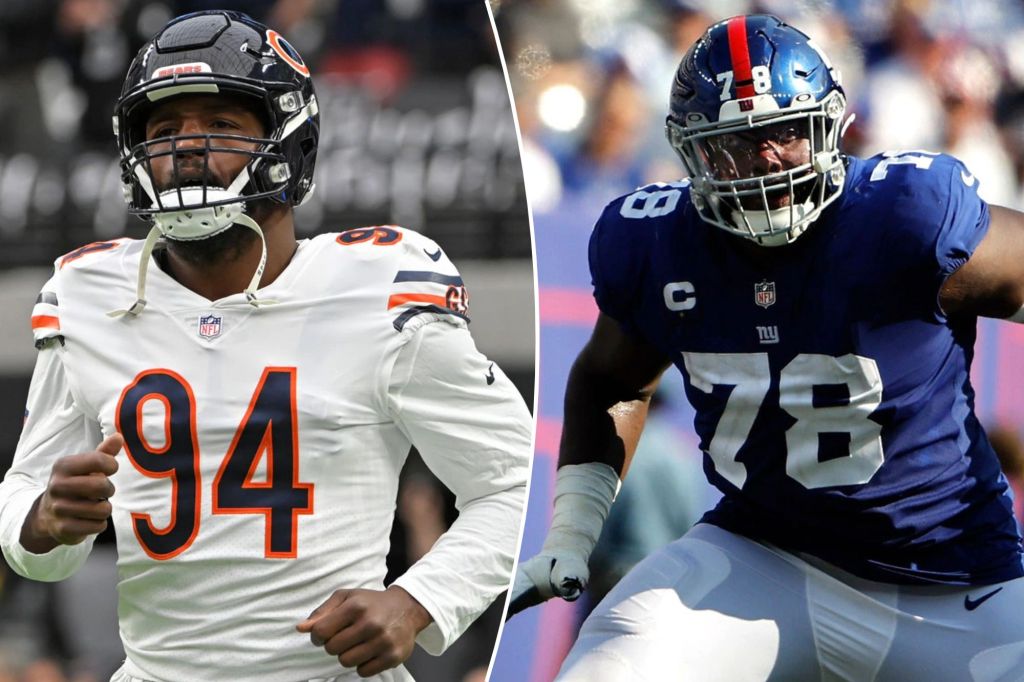 Anyone out there think this will be a freewheeling, high-scoring affair? Didn’t think so. Wet, windy weather and two subpar offenses should make for a game of field position, turnovers and whichever team has the most potent rushing attack. The wide receiver talent in this one is not fantasy football-worthy. The difference could come down to the Giants having Saquon Barkley and the Bears not having him.

No splash plays: Solid defense is fine. Game-breaking defense is better. The Giants need someone to rise up and make a big play. They have zero interceptions this season. They had no sacks or forced turnovers in the loss to the Cowboys, the first time that happened to the Giants since Dec. 1, 2019, in a game against the Packers. That was the 34th game since the 1970 merger with no takeaways or sacks by the Giants, according to the Elias Sports Bureau. The Giants are 2-32 in those games.

Unlock the speed: The 1,485 receiving yards Darius Slayton has totaled on passes from Daniel Jones are more than any wide receiver has amassed on catches from the Giants quarterback. They were draft classmates in 2019 and formed an immediate connection. It is almost hard to remember that in his first two seasons, Slayton caught 98 passes and got in the end zone 11 times for touchdowns. He was developing into a down-the-field threat, then 2021 happened and he was buried by the previous coaching staff. Slayton is not exactly a favorite of Brian Daboll’s crew and his snaps have been few and far between. But with Sterling Shepard gone for the season, Kadarius Toney and rookie Wan’Dale Robinson still out with injuries and Kenny Golladay residing in Funk Land, this feeble passing attack needs something new.

The running QB: Defensive coordinator Wink Martindale in Week 1 likened Derrick Henry to Jim Brown, and in Week 2 he likened Christian McCaffrey to Barry Sanders. Martindale laid it on a bit thick this week in his assessment of Bears quarterback Justin Fields, a far better runner than passer in his second season.

“Fields could be, for the younger crowd, a Cam Newton-type or for us older guys, Randall Cunningham-type,’’ Martindale said.

At this point, Fields is simply trying to find his NFL sea legs. He was a good (but not great) scrambler as a rookie and is averaging just 3.5 yards per rushing attempt in the first three games of 2022. He is the lowest-rated passer in the league.

The hit man: Jones “had a chance to rest up and recover a bit,” and he reported at midweek, “I’m feeling good,’’ after the battering he took against the Cowboys. He could sue for non-support after he withstood 24 pressures on his 42 dropbacks, the most by a Giants quarterback since ESPN started tracking that stat in 2009.

Jones was sacked five times Monday. The Bears have six sacks in their 2-1 start, and Trevis Gipson, Dominique Robinson and Robert Quinn are sure to test the Giants’ offensive line, to see if it can get its act together. Jones, in the first three games, has been pressured on 46.7 percent of his dropbacks. The NFL average is 26.8 percent.