Our NFL betting writer brings you his best Giants vs. Commanders predictions and picks for their NFL Week 13 showdown, which is live Sunday on CBS at 1 p.m. ET.

With playoff aspirations for both teams sitting center stage, the Washington Commanders will make the trip to East Rutherford, New Jersey, to clash with the New York Giants in a late-season battle between division rivals.

Giants vs. Commanders prediction and analysis

Few predicted that a December meeting between the Giants and Commanders would have postseason implications, but here we are. Even with an Eagles team that sits at 10-1 and a Cowboys squad five games above .500 looming over them in the NFC East, Washington and New York have both proven that they too deserve to be playing football in January.

The Commanders have won six of their last seven games to get here, while the Giants are seemingly starting to tail off after a 6-1 start to the season.  But those streaks might not necessarily matter come Sunday, as all eyes turn to a game that could make or break one of these teams’ seasons.

In what is bound to be a close game, the final score might depend on which team is better equipped to handle the other’s running game.

Both teams rank among the top 15 in the league when it comes to rushing offense, but the Commanders allow the eighth-fewest yards per game on the ground (108.4) while New York surrenders the seventh most (138.9). Washington has allowed less than 95 rushing yards in four of its last six games, and did so against the Eagles, Vikings, Packers and Texans, who all happen to have pretty strong rushing attacks.

Don’t be expecting Daniel Jones and Taylor Heinicke to get into a shootout on Sunday. Clock management and stout defense up the middle is going to be key, giving the Commanders a slight edge. 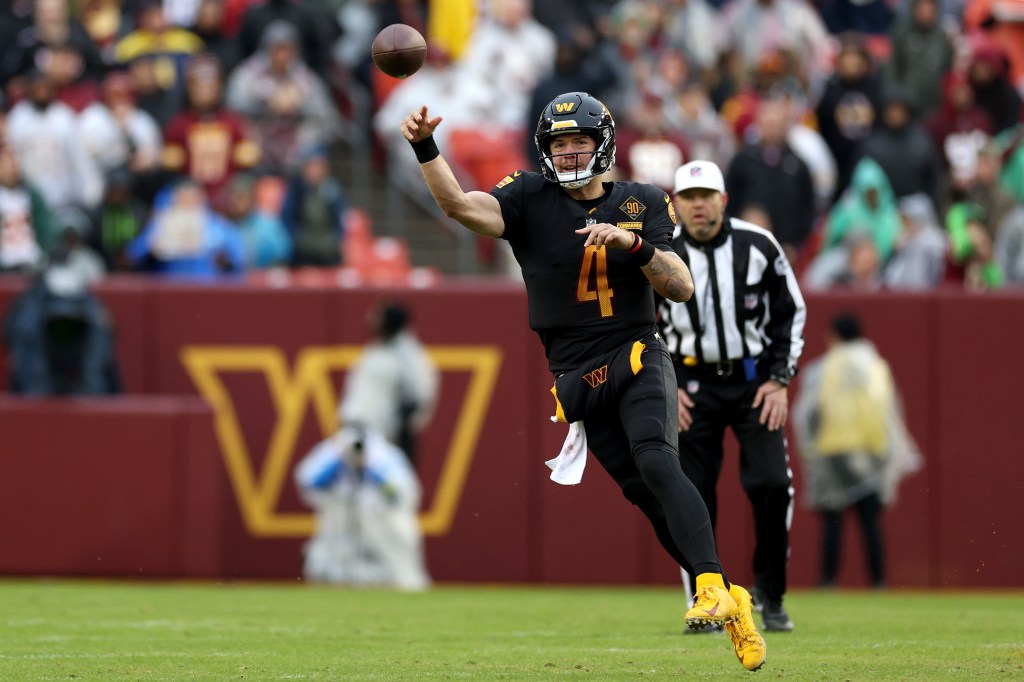 Giants to attempt a field goal on their first drive

Although the odds might not be favorable, there are a lot of signs pointing toward this being a great pick to yield some hefty profit.

On average, New York has been starting drives at its own 32-yard line and kicker Graham Gano has attempted five field goals from 50-plus this season. With those two elements in mind, this bet requires that the Giants gain at least 35 yards on their opening drive — or 42 if they were to start at their own 25 due to a touchback — to make sure this wager has a good chance to cash.

It’s certainly a doable task for a team that averages 29.9 yards on its drives this season and considering 17.6 percent of New York’s offensive possessions end in a field goal, the pick is all the more enticing.

Obviously there’s a lot of risk involved here, but throwing half a unit on the Giants to send the kicking unit out early could be a great start to Sunday’s action.

Giants vs. Commanders pick: Giants to attempt a field goal on their first drive @ +460 with Caesars Sportsbook

It’s starting to look like Robinson has officially cemented himself as the feature back in Washington’s offense.

Robinson has carried the ball at least 15 times in each of the last three games, and torched the Falcons with 105 rushing yards on 18 carries.

He’s still in a bit of a precarious situation due to the fact that he’ll likely continue to split carries with Antonio Gibson, but Gibson was limited in practice this week due to a foot injury, potentially opening the door for Robinson to flourish.

With New York allowing at least 60 rushing yards to five different ball carriers over the last three games, Robinson should have no problem attacking the Giants’ front seven.