A disaster is unfolding in Guatemala, where the Volcano of Fire has erupted, forcing nearby residents to run for their lives with no warning. Ash and mud hot enough to melt shoes has buried homes and people. Rescuers have pulled at least 10 people to safety.

More than 62 people have been killed and the toll is expected to rise. More than 46 were hurt and more than 3,200 were evacuated.

Orange superheated gas and rocks shot into the sky and poured down the mountain reportedly wiping out entire villages. The eruption sent ash as far as 40 miles away.

In the first few hours, the ash and mud remained so hot that rescuers had a difficult time reaching victims, some of whom could be heard crying out for help. The rapidly moving mixture of gases and volcanic matter -- known as pyroclastic flows -- reached 1,300 degrees Fahrenheit in some places.

By the time first responders did reach them, it was often too late. Dozens were either burned to death or asphyxiated by the deadly fumes, including children. 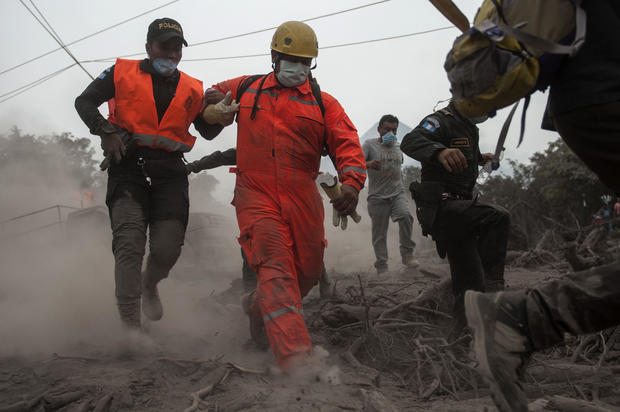 Firefighters and police are forced to evacuate a search and rescue effort as the Volcan de Fuego, or "Volcano of Fire," continues to spill out smoke and ash in Escuintla, Guatemala, Monday, June 4, 2018.

A rapidly rising mudflow destroyed a highway bridge and sent several onlookers running for their lives, and a once-pristine nearby golf course was covered in dark gray ash and mud.

"I can see buried people hurt and the situation is very sad," Manual Cobar said.

Eugenia Garcia Uspatan lost all but two of her family members.

"I only managed to find two children last night," she told Reuters. "But my two female daughters, my grandson and my son are missing, together with my entire family."

The volcano is located about 25 miles from Guatemala City and is one of Central America's most active volcanoes. Sunday's 16-hour long eruption was the most violent in more than a century.

Ronaldo posted a photo of the celebration after Torino's goal: I love this feeling😉 💪 🏼
Flick about Lewandowski and the Golden ball: Why not? He laid the foundations
Jurgen Klopp: my two main Champions League favourites are Bayern and Manchester City
Cheryshev made an assist in La Liga for the first time since September
Muller of the victory in the German Cup: a Bit of a sad moment. There were no fans in this final
Lampard on 3-0 with Watford: a dry Win at home, three goals scored-Chelsea played very well
Pulisic on 3-0 with Watford: Chelsea needed this win. We are confident that we can get into the top 4
Source https://www.cbsnews.com/news/guatemalas-volcano-of-fire-wipes-out-entire-villages-as-ash-rocks-rain-down-2018-06-04/

10 new iPhone tricks you’ll use all the time

Miami broke its all-time heat record for June, but no warnings were issued. Here's why

Kanye West is the next US President; Elon Musk his Veep. NOT

In North Korea, Coronavirus Hurts More Than Any Sanctions Could

Guru Purnima 2020: Quotes to express gratitude to your teachers on the auspicious day

With Department Stores Disappearing, Malls Could Be Next

Read Up on These Fun Facts About The Baby-Sitters Club

Two Seattle protesters hit by speeding car; One dead, other in ICU

Bullet strikes windshield of marked cop car in the Bronx

Woman, 24, dies after being hit by car amid protest

Guru Purnima 2020 significance: All you need to know about the auspicious day

Mercedes to recall 660,000 vehicles in China for oil leak

Mike Huckabee: Racism a 'spiritual' problem for US -- and elections can't solve it

Las Vegas sportsbook suffers one of biggest losses ever

More than 3,000 people put into lockdown in Melbourne

China braces for more storms; 121 dead or missing this year

Seattle Protester Dies After Being Hit by Car on Closed Highway

Russian democracy is a farce. Putin wants the same fate for America

Seattle protester dies, another seriously injured after being struck by car on closed highway

Kaepernick denounces 4th of July as ‘celebration of white supremacy’

The Latest: After lockdown, cases up in Australian state

The Most Endearing of the New Englanders Who Won Our Independence

What Happens When Politics Goes Viral?

Realtor of the Week: Experience, DNA, and knowledge benefit clients

Realtor View: Make your home as marketable as possible

Nets plan on getting Jarrett Allen reinforcements for NBA restart

For nation’s birthday, Trump stokes the divisions within US

The mysterious death of Casey Kasem

DOD says soldier from Texas died in accident in Afghanistan

Kanye West in 2020. Where have we heard that before?