Get all the latest news on coronavirus and more delivered daily to your inbox.  Sign up here.

The hackers who stole confidential files about stars including Lady Gaga from an A-list power lawyer claim to have sold all their “dirty laundry” on President Donald Trump to a secret buyer, and now they’re demanding at least $1 million for details on Madonna.

Hacking group REvil cyberattacked top entertainment attorney Allen Grubman’s NYC law firm and stole 756 gigabytes of documents on stars including Bruce Springsteen, Mariah Carey and U2. They doubled their ransom demand to $42 million last week after Grubman refused to pay, stating the FBI considered the hack “an act of terrorism.”

The hackers upped the ante by posting on the dark Web, “The next person we’ll be publishing is Donald Trump … We found a ton of dirty laundry.” It was not clear why the hackers connected Grubman to Trump, who has never been a client of the lawyer’s firm.

CORONAVIRUS AT THE AIRPORT: HOW CAN I AVOID GERMS? 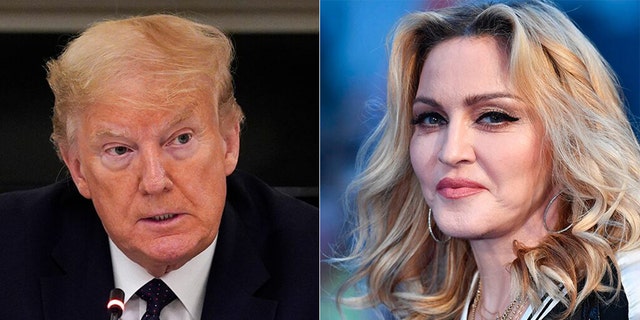 Hackers have shifted their demands from Donald Trump to Madonna. (AP/Getty)

Then on Monday, REvil revealed the Trump documents were off the market, stating, “Interested people contacted us and agreed to buy all the data about the US president …We are pleased with the deal and keep our word.” They added, “We are preparing to auction Madonna data … The buyer has the right to do whatever he sees fit with the data.”

It is not known what was in the alleged Trump trove, but sources who viewed a sample on the hackers’ site said it related to snarky mentions of Trump in e-mails from Grubman’s clientele.

In Bulgaria, too, there are problems with the virus: there are 16 cases in one team (it seems that it was caused by one player of the opponent). But it reached the semi-finals of the playoffs!
Ronaldo: The fight against racism is not for the sake of blacks, but for the sake of each of us. No one is born a racist
Joleon Lescott: Messi and Ronaldo are super freaks! Sterling follows them
Maurizio Sarri: Now is not the time to think about Lyon. Atalanta is very good, it is difficult to play against them
De Bruyne has no intention of leaving Manchester City, even if the club is banned from the Champions League
Zlatan on Rangnick in Milan: I don't even know who it is
Abraham fulfilled the conditions for an automatic extension of his contract with Chelsea until 2023
Source https://www.foxnews.com/entertainment/hackers-shift-ransom-donald-trump-madonna

Kids Feel Pandemic Stress Too. Here's How To Help Them Thrive

Sushant Singh Rajput gets road, roundabout named after him in hometown Purnea

Trump’s Planned Order on ‘Dreamers’ Will Not Include Amnesty, White House Says

Prosecutors May Not Get Trump Tax Records Until After Election, Experts Say

US Sets Record for New COVID Cases Third Day in a Row at Over 69,000

A Powerful Chief And Unexpected Splits: 6 Takeaways From The Supreme Court Term

The Racial Justice Reckoning Over Sports Team Names Is Spreading

Coronavirus FAQ: How Do I Protect Myself If The Coronavirus Can Linger In The Air?

Virus cases up sharply in Africa, India as inequality stings

Customer leaves restaurant staff $1,000 tip to thank them for working through the pandemic

Jack Charlton, Soccer Hero in England and Ireland, Dies at 85

She was competing before Simone Biles was born. Now they compete against each other

How to clean your mask, according to experts

Breathe: Into The Shadows review: It is a thriller soaked in blood and brutality

Fatal Encounters: Tracking every officer-involved killing in the U.S.

Trump confirms he OK’d US cyberattack against Russia in 2018: report

When Truman Titled a Hollywood Epic—and Then Sabotaged It

'Say Yes to the Dress' star Lori Allen: How to 'say yes' to what's next amid uncertainty

Dear Care and Feeding: My Stepdaughter Wants to Live With Us Now. How Should She Tell Her Mom?

To open CPS schools, teachers union has demands — but does the city have to meet them?

Summer Safety Guide: How to Hit the Beach, Hair Salon, Restaurants and More Amid Coronavirus

Radhika Madan shares her love for golgappas in new post

A Major Challenge to Policing Reform: the Absence of Good Data

Will COVID Push People Out of Cities for Good?

Pooja Bhatt responds to Sona Mohaptra: I compensate the people who compose music and render songs

Chris Hayes Unloads On GOP: 'One Of Worst Parties In Power In Entire Democratic World'

After months of debate over its design, the rebuilt Notre Dame will look ... exactly the same

Inside the detective-style hunt for missed COVID-19 cases

What to know about getting an above-ground pool, if you’re able to find one this summer

In Latin America, the Pandemic Threatens Equality Like Never Before

‘I Couldn’t Do Anything’: The Virus and an E.R. Doctor’s Suicide

Caught Between Indian and Chinese Troops, at 15,000 Feet

After an Arrest at a Black Lives Matter Protest: Deportation Proceedings

Fact-Checking Biden on the Coronavirus and His Own Record

At a Time of Financial Stress, 401(k) Fees Matter More Than Ever

For Muscogee (Creek) Tribe in Oklahoma, at Long Last Vindication

Who Gets the Banhammer Now?

Can These Markets Be Trusted?

Trump's shameful treatment of Lt. Col. Vindman will echo for years. Here's why.

The intangible the Nets are looking for from Jamal Crawford

'Please help us, we are abandoned here.' Thousands of Moroccan seasonal workers stranded in Spain

ED seeks details on Vikas Dubey's assets, to probe his properties and investments