How Skateboarding Can Help Fight Racism 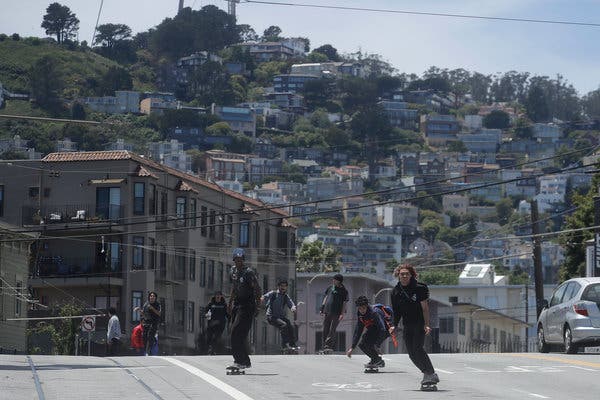 (Here’s the sign-up, if you don’t already get California Today delivered to your inbox.)

In early March, I talked with a pair of researchers at the University of Southern California who had recently published a study — funded by the Tony Hawk Foundation — showing how skateboarding helps build resilience among young skaters, and helps them form communities across backgrounds.

“The stereotype is white stoner guys,” Dr. Zoë Corwin, one of the researchers, told me at the time. “The reality in 2020 is the skateboarding community is really, really diverse, and not only are they diverse, for many skaters, that’s a point of pride.”

As protests against police brutality continued and reckonings over deeply rooted racism picked up steam, Neftalie Williams, the co-author of the study, an expert in skate diplomacy and a longtime skater himself, emailed me to catch up.

The findings in the study, as well as Mr. Williams’s ongoing work around race and skateboarding culture, had taken on new urgency.

“There’s this broader narrative in sports that sport is the great equalizer,” Mr. Williams told me last week. “But what’s in our report is that the rhetoric of a colorblind approach is not the world people live in — it’s not the world skaters of color live in.”

Skateboarding’s ethos is defined, in some ways, by resistance to authority and by bodily autonomy.

So skateboarding is how many young skaters first come in contact with the police or security guards. It may lead to their first questions about who gets to use public space and why.

In the earlier days of the pandemic-driven lockdowns, for instance, it felt pointed when skate parks were filled with sand to prevent skaters from congregating.

“People want to stop you,” Mr. Williams said. “They want to get in your way.”

For young skaters who are black or Latino, looking for places to skate may be their first time recognizing that those encounters will go differently for them than for their white friends.

Mr. Williams told me that in his research, he’s interviewed the parents of professional skaters of color, who recalled having to give their sons or daughters the talk.

“They might want to get a little flippant, because they’re kids,” he said. But the parents had to tell their children: “You cannot question authority, because you will not come home to me.”

[Find all the latest coverage of race and policing here.]

That was something Mr. Williams, who is black, recalled experiencing when he was growing up in Massachusetts. He remembered once walking through a parking lot with his board and being accosted by a police officer who apparently believed he was trying to steal a car.

“I remember thinking, ‘I don’t even have my license, how could I steal a car?’” Mr. Williams said. It was something his white friends didn’t experience.

Those encounters also leave impressions on young white skaters, who may not otherwise see racism at work, he said.

While the study found that skateboarding communities still sometimes leave girls and young women who skate feeling pushed aside, Mr. Williams said that the pace of evolution in a sport that’s only about 60 years old has been rapid, in large part because groups form more organically than they do in other sports.

“Young skaters are really excited to demonstrate to each other and en masse that they’re important and they want a better world,” he said.

In recent days, skaters have organized protests, like one in San Francisco, “Bomb Hills 4 Black Lives,” which Curbed San Francisco reported aimed to draw attention to racism at the hands of the authorities, but also within the skateboarding community.

Skaters carried signs that said, “Listen to black skaters,” and “Abolish the police,” as they rocketed down the city’s famous hills.

Mr. Williams said those are the kinds of impulses that schools, universities and businesses need to pay attention to, invest in, and foster, particularly as skateboarding gains more mainstream attention. (It was set to make its Olympic debut this year.)

But what he’d rather see, he said, is more work in individual neighborhoods — helping young skaters get gear, starting mentorship programs, or lobbying cities to build skate parks.

“You don’t have to leave it to someone else,” Mr. Williams said.

Here’s what else to know today

We often link to sites that limit access for nonsubscribers. We appreciate your reading Times coverage, but we also encourage you to support local news if you can.

Aria Villajin, who works on behalf of people with mental health issues, near her home in San Francisco.Credit...Cayce Clifford for The New York Times

Mourinho won the 200th match in the Premier League. Only Ferguson reached this mark faster – just 4 matches
Jose Enrique: Liverpool need a playmaker. Is there a better option than Coutinho?
Leonardo wants to see Allegri at PSG, but the club still trusts Tuchel
Manchester United and Liverpool want to sign 15-year-old Sochaux defender of Kambala
Lloris and Son almost got into a fight after the 1st half with Everton. Before the 2nd, the players made up
Massimiliano Allegri: I am Looking for a project that will have ambitions to win
Simone Inzaghi on the scudetto fight: Lazio looks only at itself
Source https://www.nytimes.com/2020/06/18/us/usc-skateboarding-study.html

John Krasinski's Wig On 'The Office' Even Fooled The Show's Creator

This genius portable pod can purify your water on the go

The Supreme Court Has Made the Electoral College Irrelevant

Sony Wins Again At The Independence Day Box Office, This Year With The Reissue Of 1984’s ‘Ghostbusters’

NASCAR's Bubba Wallace hits back at 'HATE' from Trump

A statue of Frederick Douglass was toppled over the Fourth of July weekend, the anniversary of his famous speech

The Electoral College dodges another bullet

Kevin Bacon opens up on his marriage to Kyra Sedgwick: ‘I found someone I was meant to be with’

Video: Jimmy John’s workers in Georgia made noose out of dough

Going to gyms, salons? These activities put you most at risk for COVID-19

What's in a name? The ignorance at the heart of Trump's Washington NFL name tweet

Doctors push for an end to racial discrimination in health care

Howard Kurtz: Media appears to be 'emboldened' against Trump as his poll numbers slip

Colin Kaepernick teams up with Disney for series on racial injustice

The decision that will haunt Trump's reelection bid

Markets swell around the world; Nasdaq sets another record

Prehistoric mine discovered in flooded cave complex in Mexico

In Miami, Rolling Back Openings To Contain The Coronavirus Surge

Ben Shapiro sounds alarm over media's 'gaslighting' of Trump's July 4th remarks: 'You're not crazy, all this stuff is happening'

Best sunscreens for acne according to experts

Egypt Accused Of Arresting Critics Of Its Coronavirus Response

Harvard to bring as many as 40 percent of undergrads to campus in fall, but most will stay home

Officials: Aurora child dies after she was attacked by dog

The mask decision that will haunt Trump's reelection bid

Help! I Have Been Taking Upskirt Photos of My Wife.

Actors’ Equity Signs Off on Live Theater in the Berkshires