WASHINGTON — Brad Parscale, the Trump campaign manager, needed to find a host city for the president’s triumphant return to the campaign trail, and he didn’t have much time.

Reviewing a list of potential locations over the past few weeks, Mr. Parscale quickly settled on Tulsa, Okla., people familiar with the planning said in interviews, mostly because it seemed easy. A deep red state President Trump carried by 36 percentage points four years ago, Oklahoma wasn’t in play for the November election. But it was the furthest along of any state in the country in terms of reopening, and it had seen fewer than 400 Covid-19 deaths since the beginning of the pandemic.

A city with a supportive Republican mayor, where the coronavirus was no longer having a deep impact on daily life, seemed like the most effortless way to pack an arena and deliver Mr. Trump the adulatory validation he craved.

But instead of offering Mr. Trump a glide path back into the campaign season, where he could sell a message about a country overcoming daunting challenges, Mr. Trump’s Tulsa rally has become yet another flash point for a candidate who has repeatedly displayed insensitivity about race in America and ignited controversies and divided people with his use of racist language.

It is coming at a deeply painful time for the country, when protests, riots and police violence have roiled major cities in the aftermath of the killing of George Floyd, a black man, at the hands of white police officers.

Mr. Trump and his aides failed to grasp the significance of holding a rally on Juneteenth, a holiday celebrated annually on June 19 that honors the end of slavery in the United States. Nor did they appear to realize that Tulsa was the site of one of the country’s bloodiest outbreaks of racist violence.

“Think about it as a celebration,” Mr. Trump said in an interview with Fox News when asked if the date was intentional. “My rally is a celebration.”

About 30 hours later, he changed the date to Saturday.

Ignoring Tulsa’s troubled history, as well as the Juneteenth holiday, has put the community on edge as the rally approaches, and refocused attention on how few African-American aides work on Mr. Trump’s campaign or in the White House.

“They’re stinging from it, they’re reeling from it,” said former Representative J.C. Watts of Oklahoma, who was the first black Republican elected to Congress from south of the Mason-Dixon Line since Reconstruction. “Juneteenth was on the schedule before any rally was. People are reeling from it.”

Mr. Trump has responded to the protests by insisting that he has done more for African-Americans than any other president in history, save for Abraham Lincoln, and that his campaign “loves the black people.”

But Mr. Watts said the episode made him wonder “if there’s any African-Americans in the White House that’s high enough that has a seat at the table.” He added, “It would have been helpful for one of them to say to him, ‘Mr. President, Juneteenth is to the black community what the Emancipation Proclamation is to Abraham Lincoln.’”

Randal Pinkett, an African-American former winner of Mr. Trump’s TV show “The Apprentice,” said that even if Mr. Parscale chose the location and original date for the rally, the responsibility lay with the president.

“He has a tremendous blind spot on these matters and he surrounds himself with people who also have those same blind spots,” said Mr. Pinkett, the author of “Black Faces in White Places.” “It’s Donald’s fault for not being intentional about having people in his inner circle that see things differently than he does.” 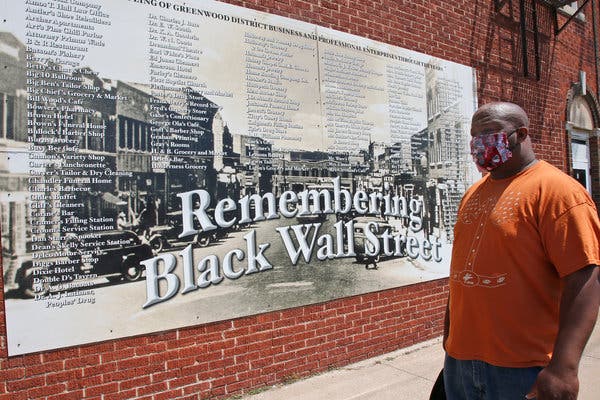 Tulsa was the site of one of the country’s bloodiest outbreaks of racist violence, in 1921. The city’s Greenwood neighborhood, where the riots occurred, was once known as “Black Wall Street.”Credit...Sue Ogrocki/Associated Press

The Trump campaign’s belated shifting of dates for the rally has done little to ease tensions. “It’s created an ugly situation for Oklahoma and the party,” Mr. Watts said. “We’ll take it, changing it from the 19th to the 20th. We’ll take it because there’s not a whole lot we can do about it.”

Adding to the anxiety in Tulsa are heightened fears about the risks of the coronavirus. Officials announced Wednesday that there were 96 new cases, the largest single-day increase since March.

The safety concerns continue to be a divisive issue in the community: While Tulsa’s mayor said he was “honored” the city would host the president, the top health official said he was worried the rally could become a “super spreader” event and recommended it be postponed.

Inside the White House, before the rally was announced, some aides raised concerns about holding it on Juneteenth, and Mr. Parscale conceded he had not been aware of the holiday, multiple people familiar with the conversation said. But he responded that the campaign had held events on Jewish holidays, and last year held a “Merry Christmas” rally in Battle Creek, Mich., none of which were criticized as disrespectful to the people who celebrated those holidays. He said he thought it would not be a problem.

White House officials decided that if the rally was to go off as planned, they would have to tack on an official event in Tulsa to acknowledge the importance of Juneteenth and the history of the city, ahead of a raucous event in the evening. But some of them also broached with Mr. Trump the possibility of changing the date. Mr. Trump also heard from outside allies.

“I spoke to the president on Friday and he asked me if I thought it would be more respectful to move the rally date off of Juneteenth,” said Senator James Lankford, Republican of Oklahoma. “I told him yes.”

Mr. Trump had also been questioned about the date during a Fox News interview with Harris Faulkner, an African-American host whom Mr. Trump has long admired and praised in private.

In a phone call later that evening, Mr. Parscale connected with Mr. Trump himself, who said he favored moving the rally to Thursday. Mr. Parscale talked him into Saturday, arguing that they could turn it into an all-day festival, with indoor and outdoor components — again, seemingly unaware that Juneteenth is typically celebrated over the course of several days in Tulsa. Mr. Trump agreed. Just before 11:30 p.m., Mr. Trump tweeted the news of the change of plans “out of respect for this Holiday.”

For a president whose guiding political philosophy has been to double down in the face of criticism, it was seen as a stunning reversal. But Mr. Trump was amenable to changing the date, multiple officials said, in part because it did not involve caving on something he had said or a theory he had promoted, but rather involved publicly overturning a decision made by his campaign aides.

As the campaign plans for a large indoor rally in the BOK Center, a 19,000-seat arena, the administration has been in damage control mode on two fronts. In registering, attendees must acknowledge the risk of exposure to Covid-19 at the rally and promise not to sue Mr. Trump’s campaign or the venue if they fall ill there. Mr. Parscale has ordered tens of thousands of masks to distribute, but does not plan to make wearing them mandatory.

Aides to Vice President Mike Pence have called Mr. Watts twice since Saturday to discuss the president’s rally. Mr. Watts said he still did not plan to attend, even though he was friendly with Mr. Pence when the two were colleagues in the House of Representatives.

White House officials, meanwhile, are working to put together an official event involving the president to commemorate Juneteenth, and announced Wednesday a long list of officials and lawmakers who would attend to show support, including virtually every black surrogate the campaign has, many of whom were given speaking roles ahead of the president.

As the rally approaches, tensions in Tulsa are boiling. On Friday night, the Rev. Al Sharpton is planning to discuss the state of race and policing in the country. Other activists said they were dreading the weekend.

“We’ve had several events take place over the last two weeks starting with the protests over George Floyd,” said Dr. Tiffany Crutcher, whose brother, Terence, was killed by the police in Tulsa in 2016, and who has worked on reforming policing procedures ever since. “Add Donald Trump to the mix, it’s a recipe for disaster. I think that would be the fuel to the fire.”

Lampard on 3-0 with Watford: a dry Win at home, three goals scored-Chelsea played very well
Pulisic on 3-0 with Watford: Chelsea needed this win. We are confident that we can get into the top 4
Rebic scored 9 goals for Milan in 11 Serie A matches
Mikel Arteta: getting Arsenal into the Champions League seemed impossible a few weeks ago
Бав Bayern won the gold double in Germany for the 13th time
Neuer provided an assist in the German Cup final with Bayer
Sarri about 4:1 with Torino: Juve had a false sense of security after a couple of goals
Source https://www.nytimes.com/2020/06/18/us/politics/trump-rally-tulsa-juneteenth.html

Mets will open 2020 MLB season at home against the Braves

Stream It Or Skip It: ‘Los Futbolisimos’ on HBO, a Spanish Kiddie-Sports Comedy That’s a Real Kick in the Head

Trump wants a park for statues of 'American heroes.' Just how might that work?

NASCAR-Xfinity Pennzoil 150 at the Brickyard Results

Dodgers pitcher Price won’t play this year because of virus

Trump seeks to 'appeal to the very best in the American character' in July 4 remarks, an aide says

Lucky Brand files for bankruptcy, has offer to sell company

Bolsonaro, others shun masks at July 4 celebration in Brazil

Spain puts 200,000 people in Catalonia back into lockdown after coronavirus spike

Thomas Jefferson alongside Black great-grandson 'holds a mirror' to U.S.

Man claims Nickelodeon fired him because he’s a ‘white guy’

Italy denies entry to private plane with Americans on holiday

Barkley inspires Chelsea to 3-0 win over Watford in EPL

Elijah McClain should not have been injected with ketamine

Former Rep. Allen West: July 4th has special meaning for me as a black man who overcame discrimination

A hiker died after a fall at the Grand Canyon

Ghislaine Maxwell prepared to snitch on ‘big names’ to save herself

Sen. Menendez blocks compensation to families of US victims bombed by al Qaeda

Woman falls to her death while taking photos at Grand Canyon

As Statues Come Down Nationwide, Trump Seeks to Establish a ‘Garden’ of U.S. Heroes

England's pubs reopen as officials warn it is not "risk-free"

Socially distant Fourth of July in Chicago area: ‘We would normally have a bigger gathering with family'