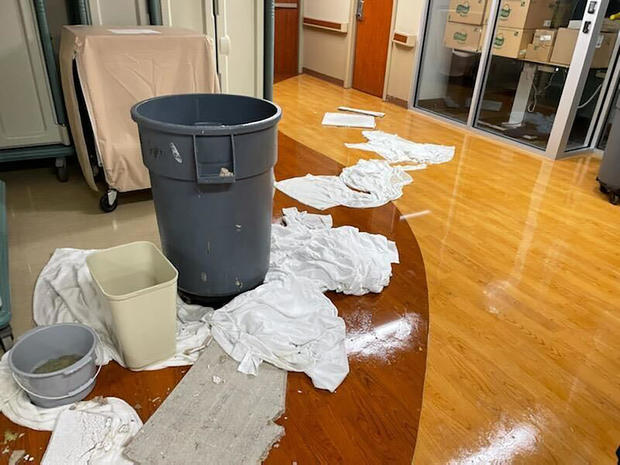 In photo provided by Dr. Birgit Bodine, various containers and clothes soak up floodwater near debris at an area of HCA Florida Fawcett Hospital in Port Charlotte, Fla., on Sept. 28, 2022. Hurricane Ian swamped the Florida hospital from both above and below, the storm surge flooding its lower level emergency room while fierce winds tore part of its fourth floor roof from its intensive care unit, according to Bodine, who works there. Dr. Birgit Bodine via AP

Hurricane Ian swamped a Florida hospital from both above and below, the storm surge flooding its lower level emergency room while fierce winds tore part of its fourth floor roof from its intensive care unit, according to a doctor who works there.

Dr. Birgit Bodine spent the night at HCA Florida Fawcett Hospital in Port Charlotte, anticipating the storm would make things busy, "but we didn't anticipate that the roof would blow off on the fourth floor," she said.

Water gushed down Wednesday from above onto the ICU, forcing staff to evacuate the hospital's sickest patients - some of them on ventilators - to other floors. Staff members resorted to towels and plastic bins to try to mop up the sodden mess.

The medium-sized hospital spans four floors, but patients were forced into just two because of the damage.

Bodine planned to spend another night at the hospital, when incoming storm injuries could make things worse.

"The ambulances may be coming soon and we don't know where to put them in the hospital at this point," she said. "Because we're doubled and tripled up."

Despite the inundation, Bodine said patients have been mostly understanding and upbeat.

"For us, as much as everything is terrible and we're exhausted ... as long as our patients do OK and nobody ends up dying or having a bad outcome, that's what matters," Bodine said.