Defense attorneys for the Trump Organization sought Thursday to ensure jurors in the company's fraud and tax evasion trial walk away with one line in their heads, a sort of mantra they repeated over and over in closing arguments:

The line, which was first used during opening statements in October, was said so frequently Thursday that when jurors returned from lunch, defense attorney Michael van der Veen began by saying, "Where was I? Oh yeah, Weisselberg did it for Weisselberg!"

He paused before finishing the sentence and pointed at the jurors, as if they might join in his chant. A few appeared to laugh.

Weisselberg testified about his tax scheme during the trial. He and two witnesses who were granted immunity during prior grand jury proceedings — current company controller Jeffrey McConney and outside accountant Donald Bender — described a series of methods used by Trump Organization executives to avoid taxes, and payroll liability, on large bonuses and luxury benefits. The trio spent decades overseeing the company's day-to-day finances and tax obligations. 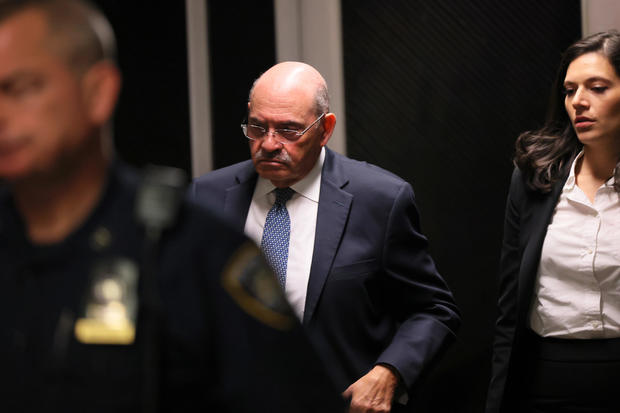 Under New York law, prosecutors need to prove that Weisselberg and McConney were "high managerial agents" acting "in behalf of" the company and "within the scope of their employment" — three phrases that were at the center of hours of debate without the jury present. Judge Juan Merchan instructed lawyers to note that even if the executives were intending to benefit themselves, prosecutors had to prove that they also intended "some benefit" for the company.

The company has denied all charges, and during trial its attorneys sought to show that members of the Trump family were unaware of the machinations of the executives working beneath them.

They showed jurors transcripts from the trial and exhibits they said showed "Allen Weisselberg micromanaged Jeff McConney" and "Bender was either totally negligent, or he turned a blind eye."

"We are here today for one reason, and one reason only, the greed of Mr. Allen Weisselberg," attorney Susan Necheles said Thursday. "Over nearly 40 years of service to three generations, he helped grow the Trump Organization into the company it is today, and along the way, he messed up. He got greedy. And once he started it got difficult for him to stop."

Bender, who was called as a witness by defense attorneys, testified that after 40 years of working on Trump Organization and Trump family accounts, he and his firm "trusted Mr. Weisselberg," but still advised against certain practices that eventually became central to the criminal charges.

For instance, Weisselberg and other executives received annual bonus checks for hundreds of thousands of dollars — signed by Trump himself — that were logged as if they were payments for work they did as independent contractors for various Trump companies, Weisselberg testified on Nov. 17.

Necheles described Bender as "all in on the" independent contractor scheme during her closing argument, but earlier in the trial Bender testified that he was "uncomfortable" with it.

"You know I trust your judgment. But, if it was me, I wouldn't do it because it's just a red flag," Bender testified he told Weisselberg about that payment scheme. "(It's) something the IRS can come after one day, and I wouldn't be getting involved. Personally, I wouldn't do it."

Necheles criticized Bender for not alerting the Trumps.

"How could President Trump or Eric Trump or Donald Trump Jr. have known these things were being done if Bender didn't tell them?" she asked.

Michael van der Veen, another defense attorney, criticized prosecutors for bringing the case at all. He accused the Manhattan District Attorney's Office of going out of its way to find something it could use to file charges against the company.

"They investigated hundreds of Trump corporations, they looked into every nook and cranny," van der Veen said Thursday, before implying that the prosecutors ended up with a thin case.

Prosecutors agreed to recommend a jail sentence of five months in exchange for testimony from Weisselberg, who had risked years in prison. Van der Veen criticized that deal Thursday, claiming that Weisselberg had to testify in a way that might help the government.

"The prosecutors had him by the balls," van der Veen said, gesturing suggestively with his hand while staring at the jury.

Prosecutor Joshua Steinglass began his closing argument Thursday, by saying the "mantra" was "no serious argument."

"Did Weisselberg do it for Weisselberg alone? Or did he intend at least some benefit for the corporation?" Steinglass asked. "There is a tremendous amount of evidence here, completely ignored by the defense in their summations, that he intended to benefit the corporation."

During the trial they pointed to luxury benefits such as high-end apartments lived in by Allen and others either rent-free or well under market rate, and untaxed. They showed spreadsheets that appeared to show more than half a dozen executives receiving untaxed bonuses, and elicited testimony from Weisselberg that Trump himself had a role in the scheme — though prosecutors failed to show conclusive evidence that Trump knew what was going on.

Weisselberg and McConney testified that in 2017, after Trump became president, the company conducted an internal review and "clean up" that flagged, but did not report, many of the practices that led to charges in this case.

Steinglass said that McConney — who was ruled a hostile witness during his testimony because of evasive answers to questions from prosecutors — tried "to emphasize Allen Weisselberg's role in the scheme, while minimizing his own."

"When it comes to Jeff McConney let's not sugarcoat this. That guy lies like the wind blows. If he tells you it's Thursday you might want to seek some corroboration," Steinglass said.

Weisselberg testified on Nov. 18 that Trump and two of his sons, Donald Trump Jr. and Eric, signed tuition checks for the private school Weisselberg's grandchildren attended. Weisselberg said after the first check he told Trump, "Don't forget, I'm going to pay you back for this." The payback, he said, was the salary reduction.

Trump was not charged in the case. But he appears to have followed the proceedings, repeatedly lambasting on his social media platform prosecutors working for the office of Manhattan District Attorney Alvin Bragg.

He wrote on Nov. 28 that prosecutors for the office spent "too much time on Trump."

"No such Fringe Benefits (sic) case as this has EVER been brought in the USA. Legal experts say this case should be dismissed, no finding or wrongdoing against Trump Companies. Thank you!" Trump wrote, without saying which legal experts had reached that conclusion.

The company could face up to $1.6 million in fines.. New York Attorney General Letitia James has indicated the jury's findings also also could have bearing on a civil case being pursued by her office.

The New York Attorney General's Office's Office conducted a parallel civil investigation and assigned two prosecutors to work for the Manhattan District Attorney's probe. While the criminal case is tightly focused on executive compensation, the civil case — filed in September — accuses the company, Trump and three of his children of a widespread, yearslong effort to commit fraud and manipulate property valuations.

The company and the Trumps deny all allegations in that case, which is scheduled to go to trial in October 2023.