Correspondent Tracy Smith asked actor John Stamos, "Do you feel like you're having a moment?"

"I hope I am," he replied. "But then, if you have a moment, then that moment has to end, right? Or something. [Still], I'm happier than I've ever been."

If John Stamos is happier these days, it could be because he's about to start the second season of the Disney+ series "Big Shot," about a hot-headed college basketball coach who gets fired and ends up coaching a high school girls' team with a certain intensity.

Smith asked, "Is it difficult for you to play a hard ass?"

To watch a trailer for the series "Big Shot" click on the video player below:

Truth is, Stamos might be one of the nicest people alive, even if he's not, by his own admission, much of a sports guy. "It's the jacket," he explained after missing a shot.

But he is someone who seems to be hitting his stride, on screen and off. In the past four decades, Stamos has become something of a fixture in our lives:  He's the heartthrob who won't ever break your heart … the friend who won't ever let you down … and from here to Broadway, someone who's been called one of the truly underrated actors in the game.

These days, he's also a husband and a father. He married actor and model Caitlin McHugh in 2018, just before the birth of their son, Billy. It was the end of what he says was maybe one of the longest childhoods in history.

"I went into becoming an adult kicking and screaming," he said. "And when you have the whole world going, 'You look 20,' I didn't have any of those tent poles that say you're an adult, right? I was just skatin' through."

"I didn't have to. I had Peter Pan syndrome, which is dangerous, you know?"

The boy who didn't want to grow up was born in Orange County, California in 1963. John was the first of Bill and Loretta Stamos' three children, and even as a kid, little John seemed destined for the stage.

"I wanted to be famous," he said. "I wanted to be famous so bad! And then once I got it, I loved it. I still do. You know, these people go, 'Oh, I hate being famous, taking pictures.' If you see me somewhere, ask for a picture. I'm happy to do it, because it's what I wanted my whole life." 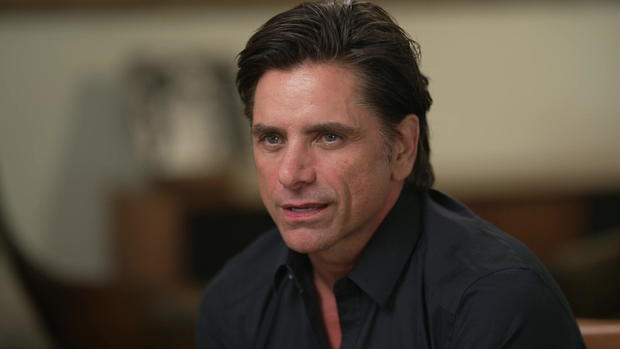 He skipped college to try his hand at acting, and landed a role as Blackie Parish on the long-running soap "General Hospital."

But his star really took off in 1987, when he was cast as Uncle Jesse Katsopolis in the TV series "Full House."

Why? "Because it just wasn't where I saw myself. You know, the reviews were like, 'This show won't last 'til Thanksgiving.' And now, I'm so proud of it. Now I'm really happy that I did that show. I'm glad I did it, obviously." 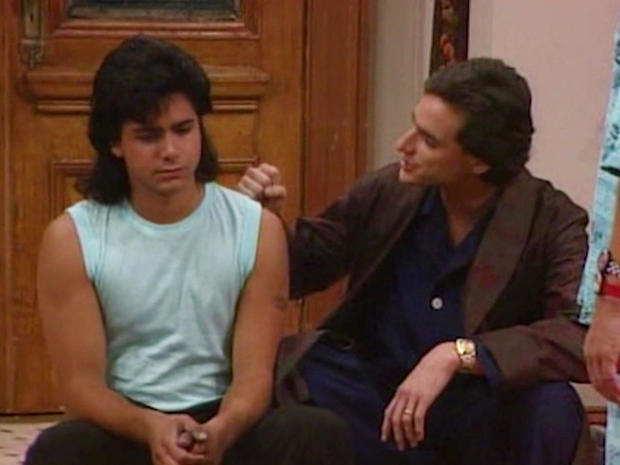 Whatever his feelings about "Full House," it made John Stamos a next-level star, and gave him a best friend in co-star Bob Saget.

At Stamos' 50th birthday bash in 2013, Saget toasted his friend: You deserve so much happiness and you are so full of love and you are such a great person. And the talent and the looks everybody resents, but you're just a heart, and I just love you very, very much."

The two were practically inseparable, and when Saget died this past January after a fall in a Florida hotel room, Stamos was shattered.

Stamos said, "I don't know what else to say about it other than obviously … one of the biggest influences in my life was Bob. I wouldn't be who I am without Bob. My parents, now that's obvious. But him, you know, he was there for everything, all the good, all the bad. He was my brother, you know? He's the brother that that I always wanted."

At his house, Stamos showed Smith Saget's guitar, which his wife gave to him. "You can only play dirty songs on here," he said.

Stamos is a collector: his home is filled with photos of heroes who became friends.  He's also collected a few screen credits, like a long-term part on the hit series "ER."

With looks, charm, and a star on the Walk of Fame, it always seemed like Stamos had the perfect life. But there were times, he said, when he didn't always want to live it. "For the longest time, when I was not sober, when I was fuzzy, I thought, 'I've done it all.' I didn't wanna kill myself, but I didn't care if I died."

"You didn't care if you died?"

And he got something of a wake-up call in 2015 when he was arrested for driving under the influence.

He said, "You know, that fateful night of, I got in my car, I thought I could drive, and I couldn't. I just have flashes in my mind about driving in circles. And people were driving near me and they would roll the window down, 'Uncle Jesse, pull over!' And I went to rehab, and it was the hardest thing ever.

"My friend said, 'You know, your mom was really worried about you.' He said my mom would call him and say, 'I'm worried about Johnny.' 'Cause I thought I was fooling everybody. Anyway, that was that. So, when that happened, I said, I can't screw this up now. I have to stay with this."

And here's something you might not know about Stamos: he' s a hell of a drummer. He's been playing with the Beach Boys and co-founder Mike Love since the 1980s. Love even officiated John and Cailtin's wedding.

"You know how they say don't meet your heroes?" Stamos said. "I'm glad that I met him, 'cause he's  everything that you'd want Mike Love to be." 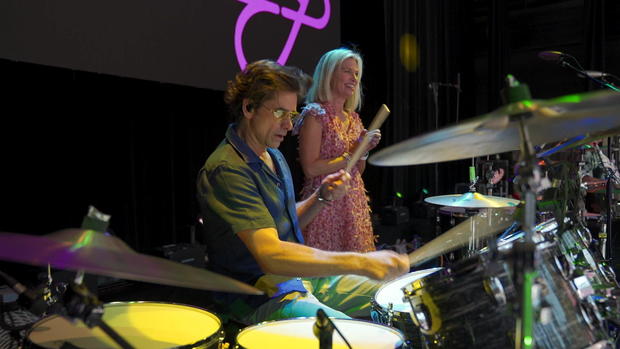 And maybe, after a few decades of figuring it out, John Stamos is everything he wants to be, too.

"I don't know, I don't know," he replied. "More kids, I hope. But I'm not looking too far in advance. I'm just thinking about now. 'Cause the next moment might be someone, you know, gone, right?"

"And this moment's pretty great?"