The Baltimore Ravens capitalized on turnovers more than the New England Patriots and moved to 2-1 on the season after a 37-26 win.

The second half was filled with turnovers from both teams but the biggest for the Ravens came on a fumble by Patriots wide receiver Nelson Agholor after a 28-yard reception. Marcus Peters forced the ball out with 5:35 left in the fourth quarter.

It would set up a touchdown run for quarterback Lamar Jackson to give the Ravens more breathing room. 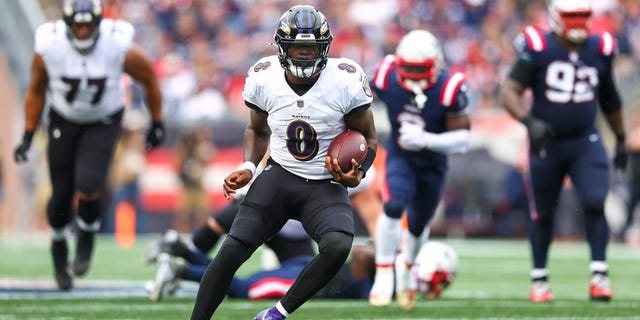 Quarterback Lamar Jackson of the Baltimore Ravens runs the ball during the second half against the New England Patriots at Gillette Stadium in Foxborough, Massachusetts, on Sept. 25, 2022. (Adam Glanzman/Getty Images)

There was a similar situation when a Ravens receiver caught a deep pass from Jackson that he fumbled after the catch, which was recovered by New England. It was a 31-26 game at the time, but the Ravens ended up picking off Patriots quarterback Mac Jones on a deep pass intended for Devante Parker.

Jones would throw another interception on the final drive of the game to ice it for Baltimore.

In the end, it was another solid performance by Jackson that resulted in a Ravens win. He finished with 218 yards on 18-for-29 passing while rushing for 107 yards on 11 carries with the touchdown. 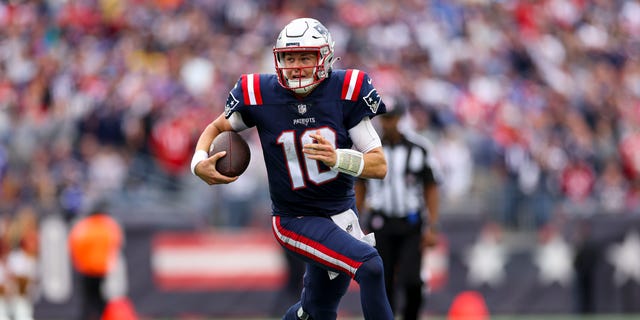 Quarterback Mac Jones of the New England Patriots runs the ball during the second half against the Baltimore Ravens at Gillette Stadium in Foxborough, Massachusetts, on Sept. 25, 2022. (Maddie Meyer/Getty Images)

He hooked up with his favorite target, tight end Mark Andrews, for two of his passing touchdowns. Andrews had 89 yards on eight carries.

As for the Patriots, Parker had an insane first half, totaling 132 yards. But he finished the game with 156 on five catches as the Ravens cleaned it up in the second half.

TOM BRADY SENDS REMINDER TO NFL BEFORE GAME VS. PACKERS

Jones went 22-for-32 for 321 yards but had three interceptions and no passing touchdowns. The Pats had three rushing scores, one each for Jones, Rhamondre Stevenson and Damien Harris.

The Ravens move on to face a tough Buffalo Bills team that’s coming off a loss to the Miami Dolphins in their next matchup. 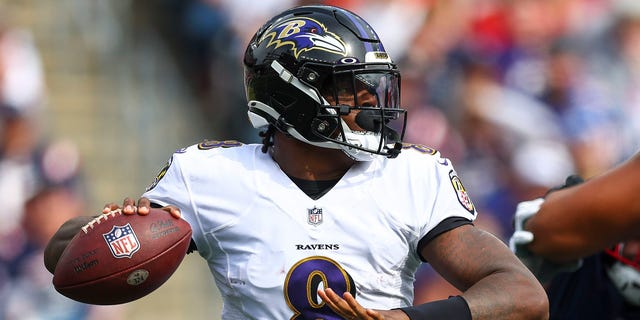 Quarterback Lamar Jackson of the Baltimore Ravens attempts a pass during the second half against the New England Patriots at Gillette Stadium in Foxborough, Massachusetts, on Sept. 25, 2022. (Adam Glanzman/Getty Images)

The Patriots will head to Wisconsin to face the Green Bay Packers next Sunday.