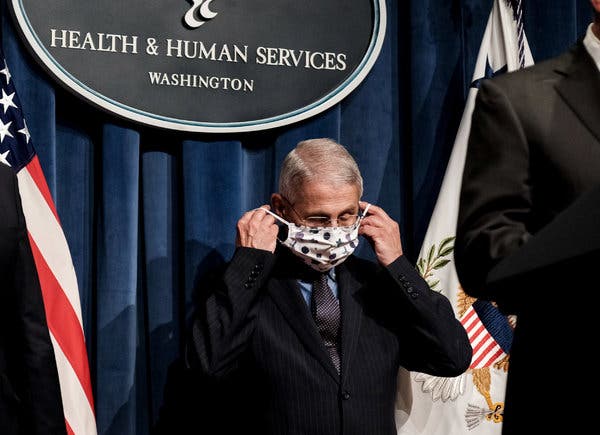 Dr. Anthony Fauci during a coronavirus task force meeting in Washington last month.Credit...Michael A. McCoy for The New York Times

As Fauci becomes more vocal, Trump aides are moving to undercut him.

President Trump’s advisers undercut the nation’s top infectious disease expert, Dr. Anthony S. Fauci, over the weekend, anonymously providing details to various news outlets about statements he had made early in the outbreak that they said were inaccurate.

The move to treat Dr. Fauci as if he were a warring political rival comes as he has grown increasingly vocal in his concerns about the national surge in coronavirus cases. He has also noted his lack of access to Mr. Trump.

Aides to Mr. Trump released to The Washington Post and other news outlets a list of remarks Dr. Fauci made about the virus when it was in its early stages. It featured several comments White House aides had privately complained about for months.

An official told The Post that several other officials were concerned about how often Dr. Fauci had been wrong.

For example, White House officials pointed to a statement he made in a Feb. 29 interview that “at this moment, there is no need to change anything that you’re doing on a day-by-day basis.”

But they omitted a warning Dr. Fauci delivered right after.

“Right now the risk is still low, but this could change,” he said in the interview, conducted by NBC News. “When you start to see community spread, this could change and force you to become much more attentive to doing things that would protect you from spread.”

Dr. Fauci works for the Trump administration, but the list of his statements was laid out in the style of a campaign’s opposition research document.

A poll conducted for The New York Times by Siena College last month showed that 67 percent of Americans trusted Dr. Fauci when it came to the virus; only 26 percent trusted the president.

In an interview with FiveThirtyEight.com last week, Dr. Fauci said that a few states had the virus under control but that “as a country, when you compare us to other countries, I don’t think you can say we’re doing great. I mean, we’re just not.”

Last week, Mr. Trump told Fox News that Dr. Fauci had been wrong about many aspects of the pandemic. Dr. Fauci “is a nice man, but he’s made a lot of mistakes,” the president said.

The U.S. outbreak is hammering Florida and spreading to the Midwest.

People lined up in their cars to be tested for the coronavirus in Miami last week.Credit...Saul Martinez for The New York Times

In Texas, leaders in one county called for a return of stay-at-home orders in response to a surge in new coronavirus cases there. Minnesota reached its highest daily totals since May. And with more than 15,000 new cases, Florida reported the highest single-day total of any state since the start of the pandemic.

The U.S. outbreak — once centered in the densely packed northeastern hubs of New York and New Jersey — is now growing across 37 states, from the worsening hot spots in the South and West to those emerging in the Midwest. Restrictions on business operations, mass gatherings and mask-wearing have become debate fodder in an increasingly polarized election year.

In Miami-Dade County, Fla., six hospitals have reached capacity as virus cases spike. The increase in cases caused Mayor Carlos Gimenez to roll back reopening plans by imposing a curfew and closing restaurants for indoor dining.

In Houston, elected leaders hope a renewed stay-at-home order will curb the city’s outbreak, one of the worst in the country. “Not only do we need a stay home order now, but we need to stick with it this time until the hospitalization curve comes down, not just flattens,” Lina Hidalgo, the Harris County judge and chief executive for Texas’ most populous county, wrote on Twitter.

In Atlanta, the mayor has said that the city was preparing to shift back to a largely stay-at-home phase. But the Georgia governor’s office described that as “merely guidance.”

In the Midwest, cases have been trending upward in every state except Nebraska and South Dakota.

South Africa reinstates a ban on alcohol to free up hospital beds.

A liquor store in Johannesburg after alcohol sales were allowed to resume. They are now banned again. Credit...Michele Spatari/Agence France-Presse — Getty Images

As South Africa’s Covid-19 infections start to spike, the country’s president has announced the reinstatement of a ban on the sale and distribution of alcohol.

“As we head toward the peak of infections, it is vital that we do not burden our clinics and hospitals with alcohol-related injuries that could’ve been avoided,” President Cyril Ramaphosa said in a televised address on Sunday.

South Africa has seen a surge in cases as the country enters its coldest month, with more than 264,000 known cases, and nearly 4,000 deaths, according to a New York Times database.

“There is now clear evidence that the resumption of alcohol sales has resulted in substantial pressure being put on hospitals, including trauma and I.C.U. units due to motor vehicle accidents, violence as well as related trauma that are alcohol induced,” Mr. Ramaphosa said.

The government is also reintroducing an overnight curfew.

In other developments around the world:

The U.S. can proceed with an execution despite the pandemic, a court rules.

The Federal Correctional Complex in Terre Haute, Ind., where the execution is set to take place.Credit...Scott Olson/Getty Images

The execution of a man convicted in the killing of a family can take place Monday, a federal court ruled on Sunday, even though the victims’ relatives protested that the pandemic would prevent them from attending.

A federal appeals court in Chicago ruled that the Justice Department can go forward with the execution of Daniel Lewis Lee, 47, who was sentenced to death decades ago for his part in the 1996 murder of a family of three.

A federal judge suspended the execution late Friday, but the decision on Sunday by the United States Court of Appeals for the Seventh Circuit put it back on track.

Several family members of Mr. Lee’s victims have called for the Justice Department to commute his sentence to life in prison. But in a lawsuit filed last week, they argued that their pre-existing conditions, including congestive heart failure and asthma, made traveling hundreds of miles from their homes to the federal penitentiary in Terre Haute, Ind., to attend the execution especially risky.

Diane S. Sykes, the appeals court’s chief judge, wrote in a ruling for the appeals panel that the family did not have a protected right to bear witness to Mr. Lee’s execution but rather were only permitted to attend.

Mr. Lee is set to become first federal inmate in 17 years to be put to death, after the Trump administration announced a campaign last year to bring back the federal death penalty from what had been a de facto moratorium.

Miralem Pjanic: Don't underestimate the 9th scudetto, but Juve can strive for more
Zinedine Zidane: Real Madrid should be proud of what they did. This is not the time to make excuses
Guardiola on 2:1 with Real Madrid: If you want to take the Champions League, you need to beat the big clubs
Raheem sterling: Manchester City were great. We knew how good Real Madrid were
Ronaldo scored all 7 goals for Juventus in the playoffs of the last seasons of the Champions League 💪
Rodrigo about Varan's mistakes: Sometimes this happens. It's a shame, but he is a great player
Juve with Ronaldo lost all the tournaments in both seasons, except for the Serie A and the super Cup in January 2019
Source https://www.nytimes.com/2020/07/13/world/coronavirus-updates.html

Amid debate on mental health, is it right for publishers to use term like Suicide Squad

Senior dogs can retire comfortably at this New Jersey sanctuary

Overlooked No More: Jovita Idár, Who Promoted Rights of Mexican-Americans and Women

US court will rehear Epstein victims' claims over plea deal

5 lessons from the pandemic to tackle the climate crisis

N.Y.C. Schools Can Reopen, Cuomo Says, Making It One of Few Big Cities With In-Person Classes

Stream It Or Skip It: ‘Being Reuben’ On The CW, A Reality Series About Makeup Artist Reuben De Maid And His Family In Wales

Lebanon's President Admits He Knew About Beirut Stockpile For Weeks

State's top health official said there's a backlog of up to 300,000 records

Children are paying the price as gun violence surges nationwide

'We let her down': Army secretary vows changes after Vanessa Guillén killing

As leaders in Lebanon deflect responsibility for explosion, skepticism grows

N.F.L.’s Push Ahead With Season Rankles Workers in the Home Office

Would you buy a $700 dollar shirt that doesn’t exist?

No set guidelines for calling off US Open if COVID outbreak

Russia claims it will win race in finding coronavirus vaccine, scientists say not so fast

Lake Tahoe ranch where 'Bonanza' was filmed sells for $38 million

Stream It Or Skip It: ‘Work It’ on Netflix, A Teen Dance Rom-Com With All The Right Moves

Private equity wants to own your DNA