When the pandemic arrived, the economic shutdown hit Las Vegas harder than any other major city in America — and the impact rippled far beyond the famous Strip. Economist Jeremy Aguero described the local job losses as staggering, with the highest unemployment rates ever reported by a state since 1976, when the U.S. Bureau of Labor Statistics began tracking this data.

Las Vegas hotels and casinos reopened their doors in June, at reduced capacity to stay in line with social distancing safety guidelines. But tourism remains down, shows closed, conventions were canceled, and many jobs in the community have not come back.

"People that never struggled before are now struggling. You don't expect to see Mercedes and BMWs in food distribution lines," said Stacey Lockhart, executive director of Hopelink, a nonprofit that provides emergency housing assistance to families and seniors in the Las Vegas area. "This is going to go clear into next year, and though a lot of people are back to work, there's a whole part of the community that doesn't have a job to go back to."

The new CBSN Originals documentary, "Reverb | Losing Las Vegas," tells some of their stories. Watch it in the player below.

French doctors are expressing relief and business owners despair as France prepares to shut down for a month to try to put the brakes on a fast-moving fall coronavirus outbreak.

The new lockdown is gentler than the one the French government ordered in the spring, but restaurants and other non-essential businesses have been ordered to close their doors in one of the world's biggest economies. 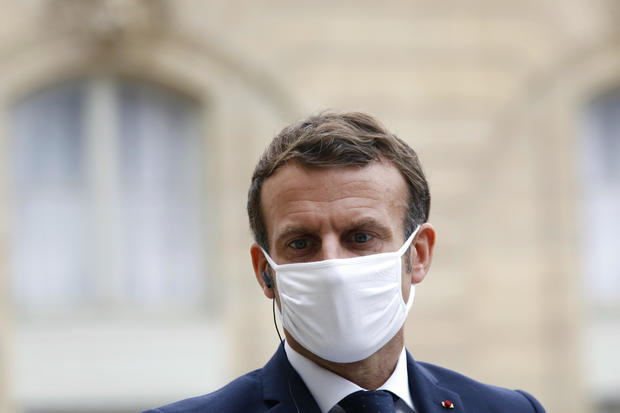 French lawmakers are voting Thursday on the new restrictions announced by President Emmanuel Macron, which are set to come into effect at midnight. The lower house of parliament is dominated by Macron's centrist party, so approval is virtually guaranteed. The prime minister plans to lay out details of the virus-fighting plan Thursday evening.

Shoppers at a Paris farmers' market said Thursday they were ready to relinquish some freedom given the country's rising number of virus-related deaths and COVID-19 patients filling French hospitals.

"It's not like the flu": A patient's warning as hospitals are overwhelemed

Hospitals in the Midwest and the Great Plains are overwhelmed with coronavirus patients – a 50% spike in the last month in the U.S. Hot spots are Michigan, Wisconsin, Ohio and Minnesota. Cases are on the rise and average daily deaths have doubled over the last two weeks, according to data from the COVID Tracking Project.

In North Dakota, over the last seven days, the Centers for Disease Control and Prevention has reported the highest COVID-19 death rate per capita in the U.S. The state has also reported one of the lowest mask-wearing rates in the country, between 45% and 49%, according to the Institute for Health Metrics and Evaluation.

"There doesn't seem to be a lot of rhyme or reason to it," said Simonson. "I have a 97-year-old who is doing wonderfully, and somebody much younger than that – we're not certain they're going to survive the day."

In nearby Wisconsin, many of the intensive care units are at or near capacity. One of those patients in Wisconsin is Carmen Lerma, who is recovering from a double-lung transplant after coronavirus destroyed her lungs.

Schalke terminated the contract with Ibisevic and suspended Bentaleb and Harit
Bielsa, flick, Klopp, Lopetegui and Zidane are the contenders for the best coach of the year award
Messi, Ronaldo, Lewandowski, Ramos, de Bruyne and 4 Liverpool players are among the contenders for the best
Zlatan about getting the Swedish Golden ball: I Plan to win it in 50 years
Anton Ferdinand was racially abused in comments to a post about a documentary about racism and Terry
Zlatan is named player of the year in Sweden for the 12th time
Ronaldo scored the 70th goal in home matches of the Champions League, repeating the record of Messi
Source https://www.cbsnews.com/live-updates/covid-19-latest-news-2020-10-29/

Joe Biden is reviving all of his past failures — and it won’t stop: Goodwin

The Inside Story of Michigan’s Fake Voter Fraud Scandal

Amanda Kloots reflects on 1st Thanksgiving without her husband