If last Sunday felt a little different … well, it should have felt different. Between 4 o’clock and 5 o’clock, the following things happened:

The Giants outlasted the Panthers at MetLife Stadium, 19-16, on a 56-yard field goal by Graham Gano.

The Jets pulled off a miracle in Cleveland, rallying to beat the Browns, 31-30.

The Mets overcame the Pirates, 7-3, scoring four in the eighth inning.

Add it up and that was a perfect 4-for-4 for the New York teams, and it quickly became apparent just how rare a feat that was when a little bit of digging revealed it had been 13 years since all four teams had won on the same day. I mean … we all know what a dry spell we’ve had in New York the past few years. But 13 years?

Every time, at least one of the teams tripped over a pothole. 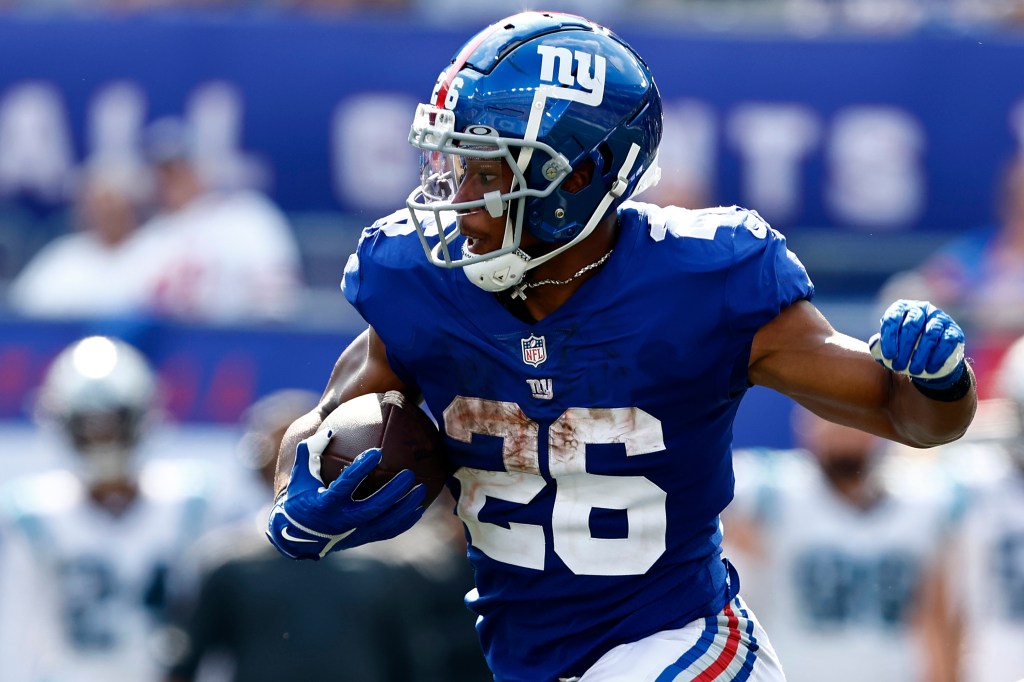 And it sort of raised the question: Just how rare is that 4-for-4?

And the answer was: Even rarer than you thought.

In all, since 1962, there have been 166 days when the Mets, Jets, Yankees and Giants played on the same day. If that number seems low to you, it’s understandable. The baseball and football seasons only overlap by a month or so — the most times there ever have been four games on the same day in one season is five. 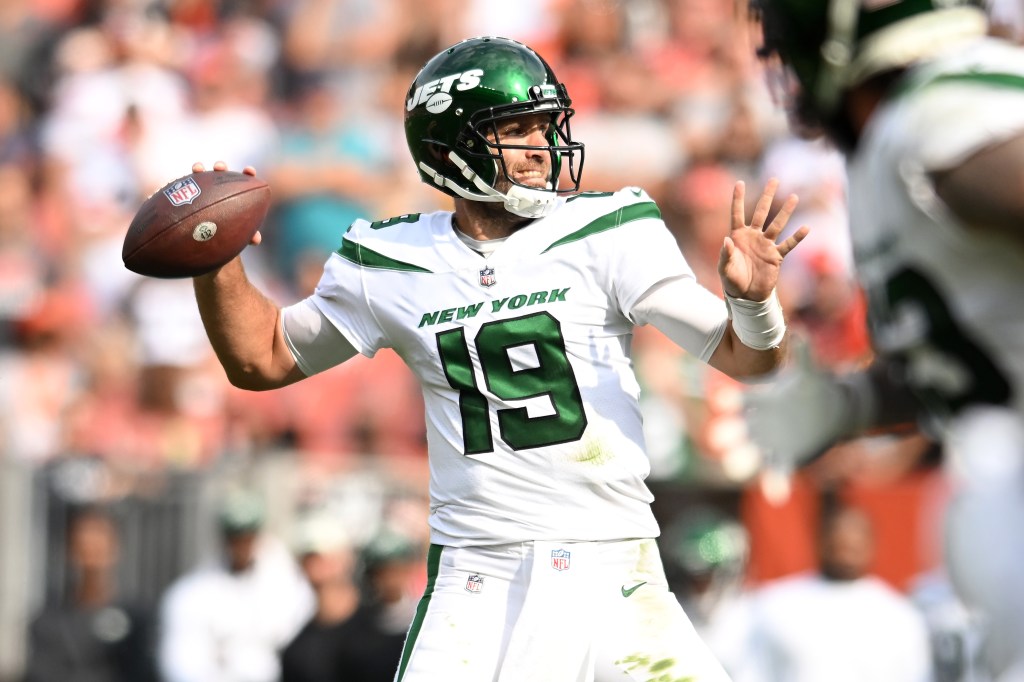 In football, teams sometimes play on Monday, and sometimes play on Thursday. In the early days of the AFL, the Jets played some games on Fridays and some on Saturdays. There have been a couple of times the baseball teams were rained out. So 166 is the number.

And last Sunday was only the 11th time they’ve all won on the same day.

(Now, if you’re a glass-half-full type, it might be worth noting that there have been just 10 times when the four teams have gone 0-for-4. If you think about it, that one is almost the more hard-to-believe stat, given what we’ve seen around here the past few years.) 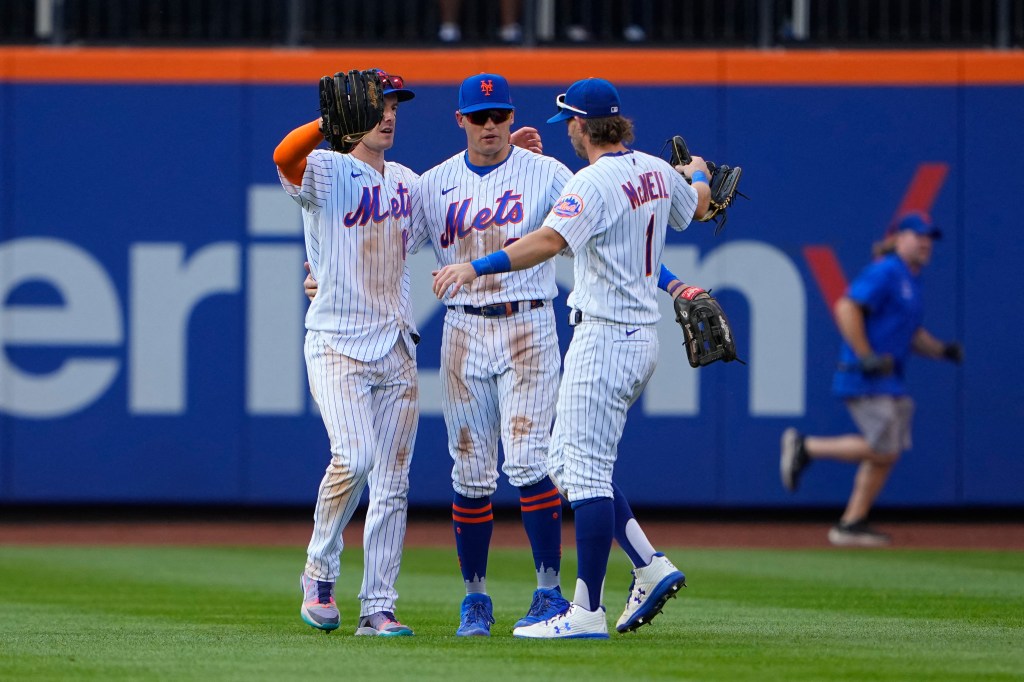 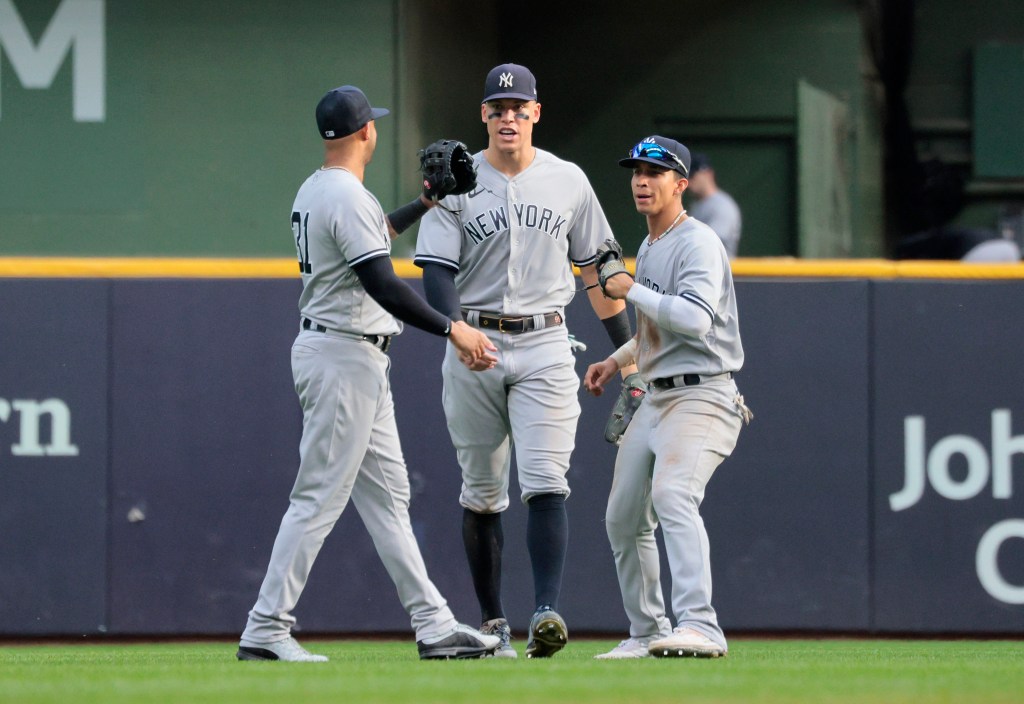 The first time all four teams took the field on the same day was on Sept. 16, 1962. The Giants lost their season opener to the Browns at Cleveland’s Municipal Stadium, 17-7 (Jim Brown: 17 carries, 134 yards). The Jets (then the Titans) were crushed in San Diego by the Chargers, 40-14. The Yankees lost to the Red Sox at Fenway Park, 4-3. Amazingly it took the Mets to avoid an 0-fer that day, since they beat the Reds at the Polo Grounds, 8-2, to improve to 37-111 in their inaugural year. 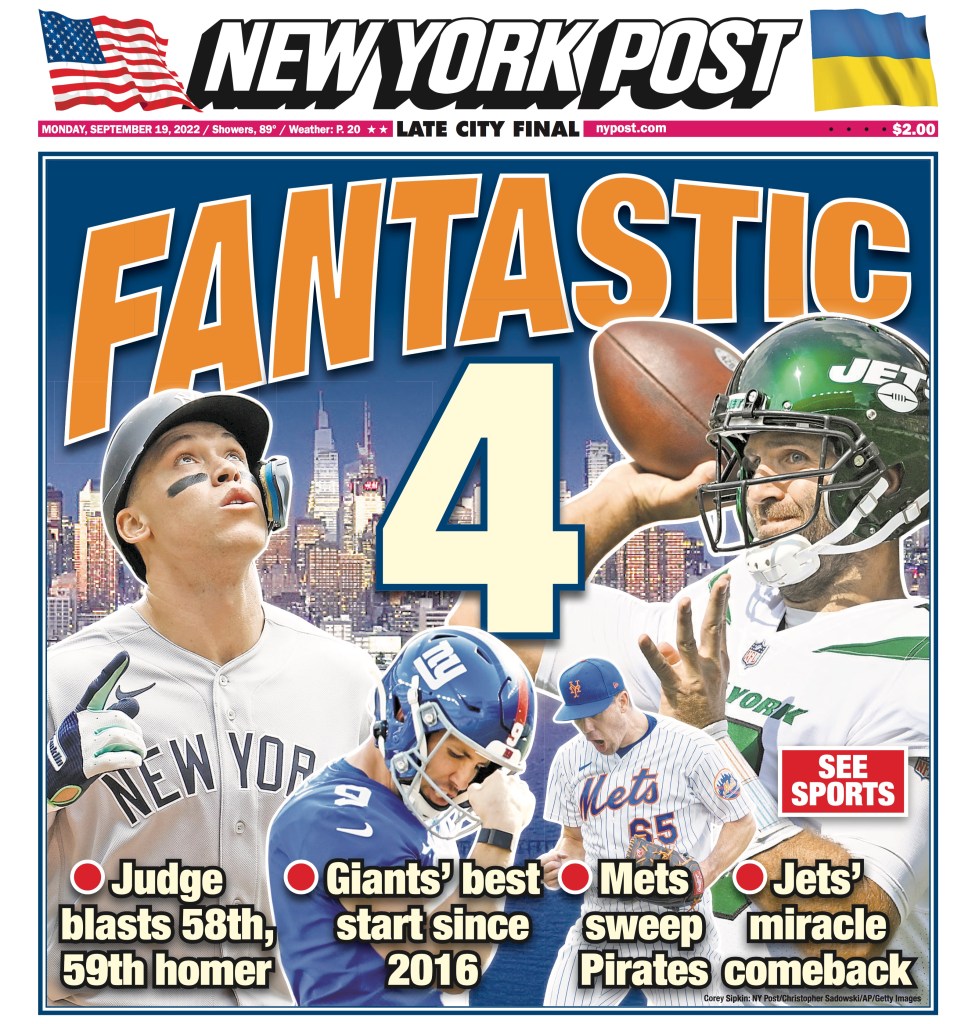 Our Fab Four will not get the chance to go 4-0 in consecutive weeks for just the second time (Sept. 28-Oct. 5, 1986, was the other) since the Giants don’t play the Cowboys until Monday night.

But next Sunday they will all be on the schedule. So they will try to turn in two 4-0 weeks in the same year for just the third time and the first since 1997, when it happened Aug. 31 and Sept. 28.

Now, this might not be at the fore of any of the players’ minds when the Mets play at Atlanta, the Yankees host the Orioles in The Bronx, the Jets travel to Pittsburgh and the Giants play the Bears at MetLife. But in our suddenly rejuvenated sports town, it’ll be something to shoot for. A little something for everybody, as they say. After all, it doesn’t happen every week. It barely happens at all.

I concede: When it looked as if the Browns might actually murder statuesque Joe Flacco early last week in Cleveland, I was among the legions calling for Mike White and his young legs. But as a perennial sucker for a good story, I wouldn’t mind seeing Flacco ring up the Bengals for a few more touchdown passes Sunday. What’s the T-shirt say? Old guys rule!

I was a huge fan of the original “Quantum Leap” back in the day, and I’m just intrigued enough by the pilot of the reboot, starring Raymond Lee, to give it a genuine shot.

I’m pretty sure you’d be willing to get your uniform dirty for Brian Daboll. 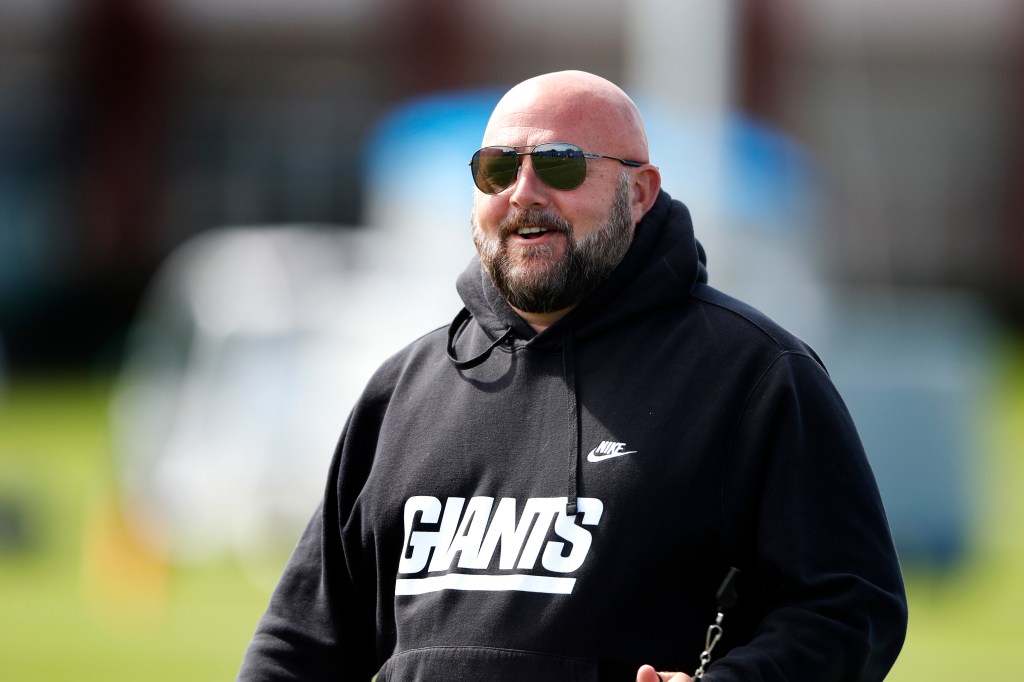 Whack Back at Vac

Marc Aronin: In the busiest time of the year in sports, I do hope the sporting community took a few minutes to acknowledge the greatness, grace and professionalism that is Roger Federer as he retires from an unmatched career of excellence.

Vac: I would’ve preferred his farewell be at Wimbledon, but Friday’s doubles match, paired with Raf Nadal, wasn’t a bad exit strategy either. We won’t soon see his like again. 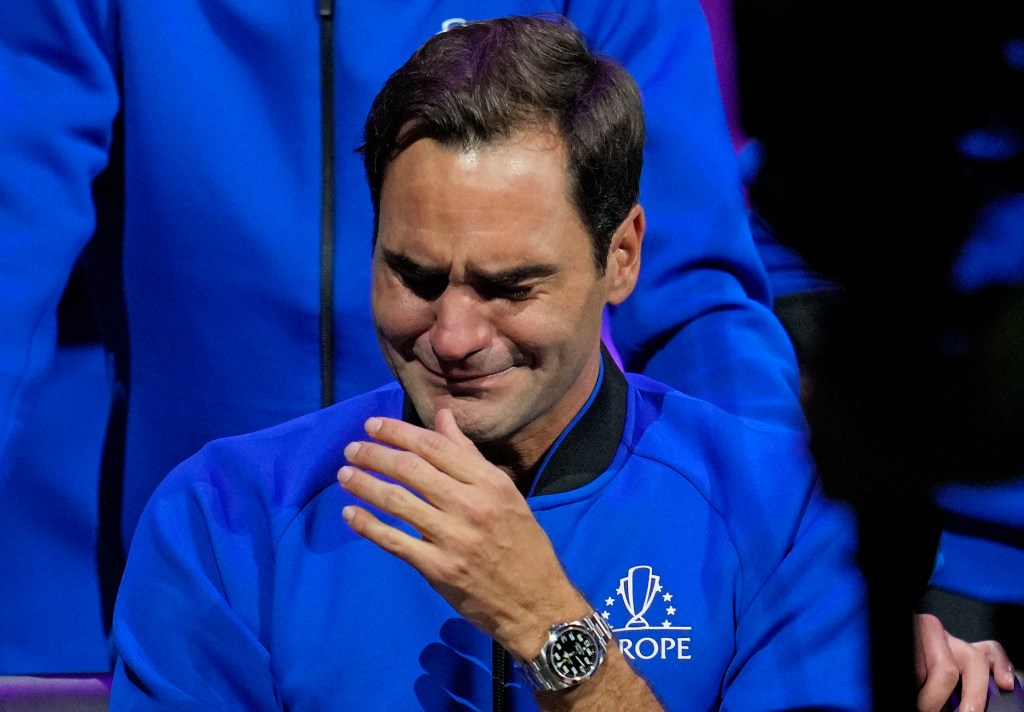 Alan Hirschberg: On Monday, writing about the Jets, you said that Corey Davis touchdown after the missed extra point “… shouldn’t have mattered. The Browns were still up six.” Unfortunately, we now live in the world of FanDuel and DraftKings. With the spread on that game at 6.5, to a lot of people — it mattered!

Vac: Maybe one of these days I’ll get used to a world where we don’t simply whisper fun gambling facts, the way we did for about 100 years. But it’s going to take a while.

@shanebbb: We’re pulling away in Cleveland, with the two ex-Mets playing big. Pretty good for “get what you can for him.”

@MikeVacc: With Francisco Lindor and Cookie Carrasco having big years for the Mets, and Amed Rosario and Andres Gimenez doing likewise for the Guardians, looks like we have a new gold standard for “trade that benefitted both teams.”

Jay Cummings: Imagine if Gerrit Cole was pitching against Aaron Judge — Aaron would have 80 home runs.

Vac: Sorry. That one made me giggle. And I’m still giggling.

What Did Tully Do To Kate in ‘Firefly Lane’? Season 2’s Car Crash Explained

‘Jurassic World Live’ is on tour. Here’s everything you need to know.

Stream It Or Skip It: ‘Sr.’ on Netflix, an Intimate Documentary About Robert Downey Jr.’s Relationship With His Father

Wall Street banks to slash bonuses as much as 30% as slowdown looms: reports

Killed Islamic State Leader Had Previous Run-In With US