Mission: Film a major action movie amid COVID 19. For Christopher McQuarrie, it's not impossible

In each successive outing of the long-running “Mission: Impossible” franchise, star Tom Cruise and the rest of the creative team have looked for ever more daring ways to live up to the title, whether having Cruise’s superspy Ethan Hunt scale the world’s tallest building, Dubai’s Burj Khalifa, in 2011’s “Ghost Protocol” or staging a death-defying helicopter chase in 2018’s “Fallout.”

But of all the challenges the series has taken on, nothing quite tops a pandemic.

In an interview Thursday from London, where he is in pre-production on the as-yet-untitled seventh installment, writer-director Christopher McQuarrie said the film had been two days away from shooting in Venice, Italy, in March when the coronavirus outbreak forced the evacuation of the city. Still, despite the mother of all production snafus, McQuarrie said the “Mission” team has been pressing ahead.

“We have a saying on this franchise that disaster is an opportunity to excel,” said McQuarrie, 51, who has helmed the last two entries in the series, 2015’s “Rogue Nation” and “Fallout.” “Any time we run into any sort of setback we immediately look for ways that we can improve based on whatever time that setback affords us. … Within 72 hours [of the shutdown] we had developed a new plan in terms of keeping pre-production going and keeping people employed and keeping the studio moving as much as we could.”

McQuarrie joined film critic Justin Chang for a live virtual conversation about the critically acclaimed blockbuster “Fallout,” which Times readers chose as the Week 13 champion in the #UltimateSummerMovie Showdown. Other films in the running included “Caddyshack” (1980), “National Lampoon’s Animal House” (1978), “Purple Rain” (1984), “Little Miss Sunshine” (2006), “Air Force One” (1997), “Saving Private Ryan” (1998) and “Once Upon a Time … in Hollywood” (2019).

The highest-grossing film in the “Mission” series — and, for that matter, of Cruise’s entire career — “Fallout” earned $791 million worldwide. The film drew raves for its elaborately choreographed action sequences, including a motorcycle chase through the streets of Paris and a helicopter dogfight filmed in a remote and rugged part of New Zealand. But McQuarrie said that he and Cruise were ultimately less concerned with such eye-popping spectacle than with delivering emotional pyrotechnics. 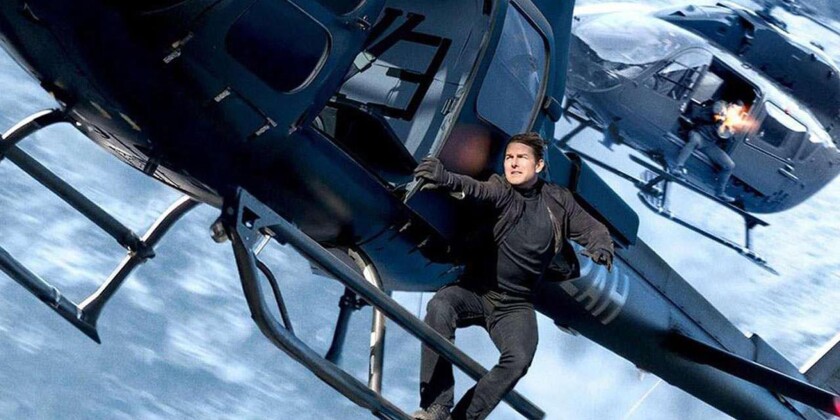 Tom Cruise hangs from a helicopter in a climactic action sequence in “Mission: Impossible – Fallout.”

“People think we obsess about stunts and all of the showing off,” said McQuarrie, who made his breakthrough 25 years ago as the writer of the twisty 1995 crime thriller “The Usual Suspects.” “That’s the contract we signed with you. That’s the stuff we owe you when you show up to ‘Mission: Impossible.’ But that’s actually not the stuff that we worry about. The stuff we worry about the most is: ‘Do I care about this character? Do I feel stakes in this situation? Am I invested in this journey?’ ”

To that end, McQuarrie said, a great deal of care went into developing fully fleshed-out characters for “Fallout,” including casting Henry Cavill, best known for his turns as Superman in movies like “Justice League,” against type as the film’s baddie, CIA assassin August Walker. “I had met with Henry and had a really lovely lunch with him here in London and he’s got a phenomenal sense of humor,” McQuarrie recalled. “I knew that that sense of humor meant he’d be a great villain. People ask me, ‘What is the secret to a great villain?’ And I always say it’s casting.”

McQuarrie, who is set to direct the next two installments in the series, said that same level of thought and planning is now being applied to the challenge of mounting a big-budget action tentpole in the middle of a pandemic.

“You have to put in place protocols so that the crew is working in smaller groups so that if someone gets sick ... they can be taken out and not have to isolate the entire crew,” the director explained. “It’s masks on set, social distancing, frequent hand-washing, frequent COVID testing, everybody has their temperature checked before they come in and contact tracing. … We’ve been very fortunate so far.”

With such measures in place, McQuarrie is hoping to ramp up production again “very soon,” though don’t try to pin him down to an exact date. “I’m only not saying when because my fingers are crossed,” he said. “I don’t want to jinx it.” 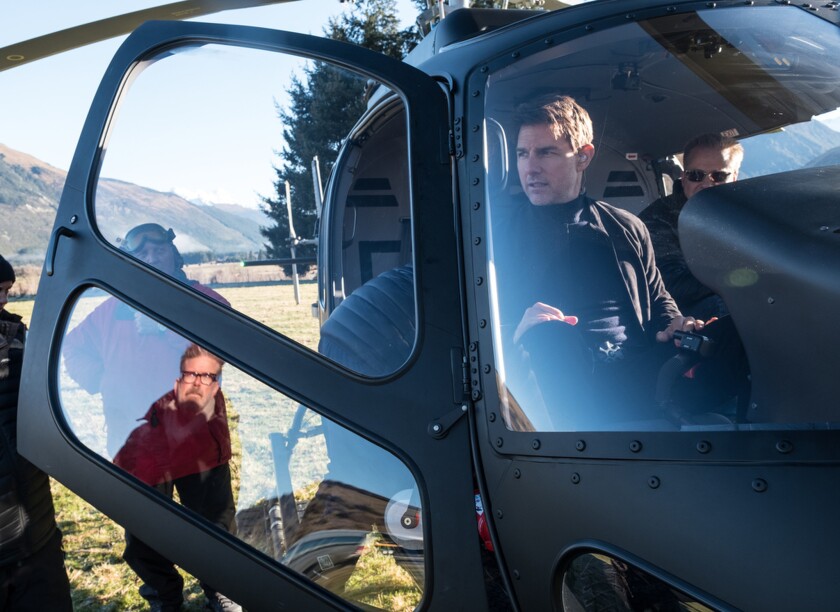 Director Christopher McQuarrie, in window reflection, and Cruise on the set of “Fallout.”

Even as it has been beset by delays, “Mission: Impossible 7" drew controversy recently over reports of plans to blow up a historic 1908 railway bridge over Lake Pilchowickie in southern Poland for one of the film’s action set pieces. Speaking to Chang, McQuarrie said the public backlash to the idea, which led to a petition defending the bridge being sent to Poland’s minister of Culture and National Heritage, was based on a misunderstanding.

“There was never a plan for us to demolish a 111-year-old protected monument,” said McQuarrie, who issued a lengthy statement on the kerfuffle Thursday. “Very early in pre-production there was a rough concept of this sequence involving a bridge that would be partially demolished. We put out feelers globally in every territory we could think of ... [asking] if they had a bridge that they wanted to get rid of. ... The conversation took on a life of its own and became politicized and a lot of misinformation was published.

“What was very clear was that it upset a lot of people in Poland. And we wanted to set the record straight. We really do take enormous care with the locations that we go to and the historical monuments we feature in our movies. So we just wanted everybody to know that there was no disrespect intended.”

This being a “Mission: Impossible” film, more hurdles are certain to come. But with all of Hollywood currently grappling with how to move forward amid a pandemic that shows no sign of ending, McQuarrie said that he is doing his best to roll with whatever happens.

Kolasinac will move to Bayer from Arsenal for 11 million euros + bonuses (Fabrizio Romano)
Dyer called the toilet the best player of the match between Tottenham and Chelsea
Ferencvaros will play in the Champions League group for the first time since 1995. This is the longest break between the first and second appearances
Jose Mourinho: what happened to Dyer is not normal, he was dehydrated. If the League management doesn't care about the players, I don't
Jose went berserk twice during the match with Chelsea: ran over Lampard and ran to look for Dyer - he rushed to the toilet right during the game
Lampard on relegation from the League Cup: we Need to keep a positive attitude. Everything will come if Chelsea score second, leading the score
Call of nature, what can you do? Dyer explained why he ran to the dressing room during the match with Chelsea
Source https://www.latimes.com/entertainment-arts/story/2020-08-06/mission-impossible-fallout-christopher-mcquarrie

Yankees likely will start J.A. Happ in Game 3 — if needed

UN meeting that began with unity concludes with divisions

Apple Continues to Go All in on Health

The NBA Finals: Why the Lakers will win the championship

The NBA Finals: Why the Heat will win the championship

LEADING OFF: Wild, 8-game day opens with Bauer vs Fried

In Trump-Biden debate chaos, China is the big winner

A Guide to Pet Portraits

How Singapore's Changi Airport is adapting during Covid

One boy killed, another injured in Westlake Village crash

An Epic Moment of National Shame: The Debate Was an Embarrassment for the Ages

The biggest falsehoods and exaggerations in the first Trump-Biden showdown

'I am woman' singer Helen Reddy has died

Yankees’ Brett Gardner delivers after getting start over Clint Frazier

Merriam-Webster’s most searched words after the presidential debate

Debate veers from ‘How you doing?’ to ‘Will you shut up?’

GOP Pollster Asks For 1-Word Reviews Of Trump's Debating. The Answers Are Wild.

Interruptions and Insults: All About the Very Uncivil Tone of the First Presidential Debate

Liz Peek: First presidential debate leaves no clear winner, Trump needs to do this at next faceoff

What We Learned From The First Presidential Debate: Full Recap

The First 2020 Presidential Debate Was Nasty, Brutish and Long

Of Course, the Debate Was Always Going to Be About Trump

It Wasn’t a Debate. It was a Shameless, Dangerous Tantrum by the President.

More than 60 million people in India may have caught Covid-19, survey finds

President Trump Was Asked to Condemn White Supremacists. He Gave Them ‘a Huge Win’ Instead

Proud Boys celebrate Trump’s mention of them at the debate.

Trump to far-right extremists: ‘Stand back and stand by’

The Debate Was Good!

Analysis: Trump leans on tone that turns off voters he needs

Singer Helen Reddy, Who Shot To Stardom With Feminist Anthem 'I Am Woman,' Dead At 78

Trump’s warning on voting by mail: 'This is not going to end well’

Media call for upcoming debates to be 'canceled,' urge Biden to back out after first brawl with Trump

This is how Farhan, Swara, Gauahar react on forcible cremation of Hathras rape victim's body

A Biden voter and a Trump voter debate the debate