The MTA is sending armed guards into the subways to stop farebeating — and says the move is already saving it money.

The transit agency contracted a private security firm to provide the armed personnel at the Myrtle-Wyckoff station on the Brooklyn-Queens border since before summer, officials revealed Tuesday.

The transit agency is now netting about $100,000 a month in additional revenues thanks to the mere presence of the guards, who just stand by the vending machines and don’t make arrests, MTA safety official Robert Diehl told authority board members at a meeting.

Armed guards have since been placed in the nearby Halsey Street station in Brooklyn, too, officials said.

The agency also decided to use unarmed guards to block emergency exits and try to prevent scofflaws at 12 other stations, officials said.

“We actually started with armed guards first at the [fare] machines. Later, after discussion, we decided, let’s introduce some unarmed guards at the gates,” Diehl said.

“Once that gate is open, it’s like Black Friday at Macy’s,” Diehl said of subway entrances. “Holding that gate is imperative to stopping half the amount of fare evasion in our stations. 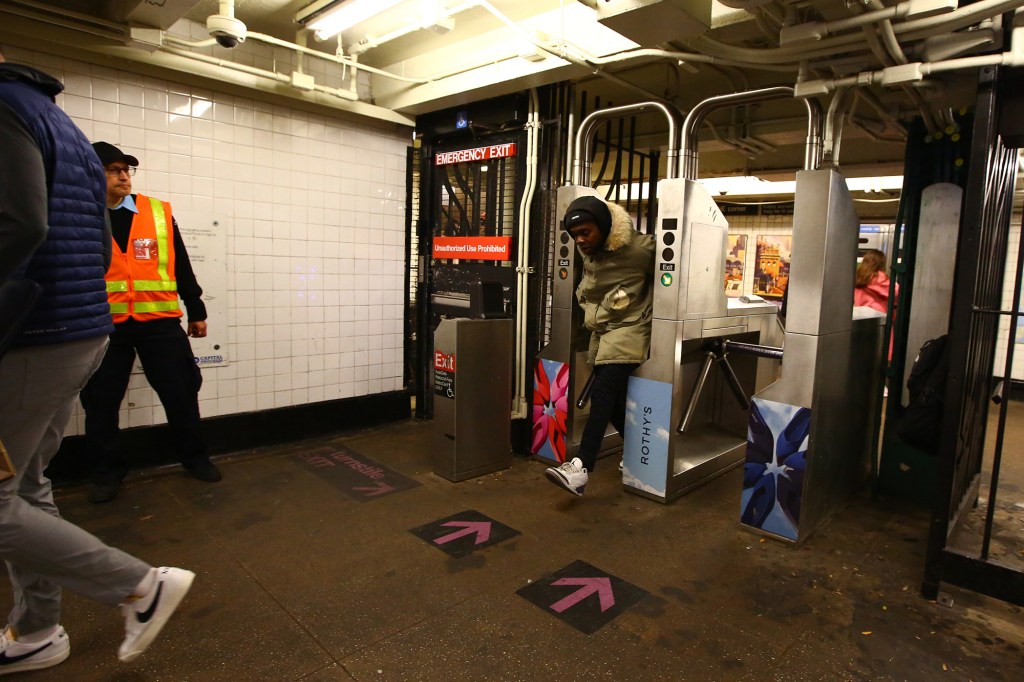 “What we’re really trying to stop is the opportunists, that person that once the gates open sees three people go through and says, ‘Hey, why not me?’ and then you got eight people behind that person coming through.”

The presence of the guards is meant to “deter” riders from entering through the exit gate, and prevent vandalism of vending machines, which had been a persistent problem at the Myrtle-Wykcoff station in particular, Diehl said.

It’s unclear if more private armed security will be hired for other stations, but the MTA is at least expanding its unarmed guards to other stops, officials said.

MTA CEO Janno Lieber has claimed that transit criminals are “overwhelmingly” fare-beaters, although he has yet to provide statistics to back that up.

As of May, the MTA estimated it was on track to lose $500 million to fare evasion this year.