MANDALAY, Myanmar — With barely enough time to yell “run,” hundreds of jade miners had only moments to escape their killer: a giant wave of mud and water, more than 20 feet high, propelled out of a giant pit mine swollen with rainwater.

Weeks of heavy rains, carried by the seasonal monsoon, had filled the Wai Khar jade mine in northern Myanmar and turned it into a lake. Towering over the pit was a 1,000-foot hillside topped with a mound of mining waste, its foundations weakening with every drop of rain.

Just after sunrise on Thursday the earth began to shift and a wall of mud cascaded down the mound’s steep slope, slamming into the flooded mine and sending a huge wave of water along its walls as rushing green water swept from one end of the lake to the other.

“When the open-pit mine collapsed, the workers didn’t have time to run away,” said U Tin Soe, the region’s representative in Parliament. “The height of the wave was about 20 feet and it drowned many people. It was like a tsunami.”

Hundreds of miners who were digging for jade illegally near the water’s edge were quickly overwhelmed by the muddy green wave. Some managed to run to higher ground. But many were not so lucky.

By evening, officials said 162 bodies had been recovered, and officials expected the death toll to surpass 200. Officials said there was little left for rescuers to do but retrieve bodies that floated to the surface.

The disaster occurred after a heavy rainstorm in Hpakant township in Kachin State, where miners labor in notoriously hazardous conditions to produce jade worth billions of dollars.

The government ordered the mines in the region to close from July 1 to Sept. 30 because of the risk of landslides during the heavy rains of the monsoon season, officials said.

But at the Wai Khar mine, hundreds of illegal workers came in to take the place of the regular miners despite the risk, said Mr. Tin Soe.

“The government ordered them to stop because it is dangerous to work here in the rainy season,” he said by phone from the scene of the disaster. “But after the mining companies stopped, an illegal ethnic armed group took money from the illegal miners and gave them permission to work here.”

Kachin is Myanmar’s northernmost state and borders China and India. Rich in natural resources, Kachin has been racked by fighting between the military and ethnic rebels, but the lucrative jade mining area has largely remained under government control. Despite attempts to regulate the industry, much of the mining there is done illegally by wildcat miners.

Much of the wealth generated by the jade industry is controlled by Myanmar’s military, which long ruled the country and retains vast authority under the Constitution it drafted. 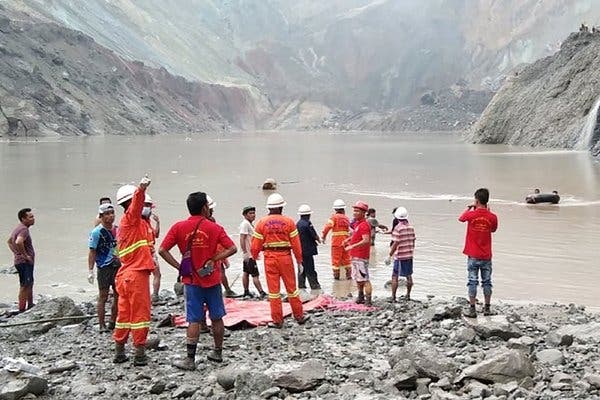 Rescuers searching for survivors after the landslide at a jade mine in Hpakant, Kachin State, Myanmar.Credit...Myanmar Fire Services Department, via Agence France-Presse — Getty Images

But the main rebel group in the region, the Kachin Independent Army, also finances its operations from the jade trade. It took over the mine when the consortium of five companies that operate it closed for the season on Tuesday.

Mr. Tin Soe said that about 100,000 miners work in the region and it is impossible to stop them despite the risks.

“If people continue working, there will surely be more landslides and death,” he said. “But there is no rule of law in this area. That’s why it’s difficult to control.”

Mine collapses occur frequently in the jade mining region of Kachin State. More than 50 people died in a similar landslide last year, and dozens were swept away the year before. At least 120 were buried in 2015 after the collapse of a mound of mining waste known as tailings.

U Kyaw Min, the administrator for the Wai Khar district said continuing rainfall was hampering the search-and-rescue effort.

“We can’t go deeper to rescue, so we have to pick up the floating dead bodies,” he said. “It’s also difficult to send the patients to hospital because the roads are muddy because of the rain.”

Lester wants to rent Trincou at Barca with the obligation of ransom for 50 million pounds
Scott Parker: Fulham have a lot to progress. And I am happy about it
Manchester United are threatening to pull out of negotiations for Sancho if Borussia do not reduce the price from 120 million euros
Cesc about Casillas: You are a mirror to look into
Lone mascots are another symbol of the year
Casemiro: bale is the top 3 in the world at his best level. But we must admit that he is not in the best shape right now
Ferran Torres: Every player wants to be in the attacking team, and city are one of the most attacking teams in the world
Source https://www.nytimes.com/2020/07/02/world/asia/myanmar-jade-mine-collapse.html

“Slogging Through Step By Step By Step”: Slow Progress On Capitol Hill Talks To Extend COVID-19 Unemployment, Other Relief

The Lebanon Explosions in Photos

Coroner confirms the death of Frank Ocean's brother, 18, and the tributes pour in

Does Blood Plasma Work for Covid-19 Patients? No One Knows.

Jaguars' Gardner Minshew on being placed on the COVID-19 list: 'It took one look at me and ran the other way'

Karen Bass under fire for Cuba comments amid VP vetting

Explosion in Beirut: Photos From a City Still Reeling From the Blast

Virginia’s Kings Dominion to stay closed for rest of 2020

Questions being raised after Kodak’s stock has a big moment

With 2020 on pace to be the worst year in a decade for Black suicides, Cook County officials sound alarm on yet another ‘horrifying’ pandemic

Public housing residents celebrate students heading off to college despite COVID-19: ‘It really means a lot and it motivates me’

Pelosi Willing to Settle for $3.4 Trillion on the Next Coronavirus Relief Package

US home of F1 gets its cash payment from Texas

Remdesivir made affordable for India; costs ₹4,700 per vial, thanks to Jubilant

These high-waisted Fabletics leggings are a workout must-have

Black SUVs line up for laid-off employees outside NBCUniversal offices

Fulham triumph in world's most lucrative football match, worth a possible $346 million

Detroit City FC closes in on $1.2 million goal for partial sale of team

Why do we still have The Bomb?