Two hero cops recalled Monday how they leaped into action to save a man who fell onto subway tracks moments before a train barreled into a Manhattan station, a dramatic rescue caught on body-cam footage.

“We knew the train was coming. Somebody yell out, ‘Two minutes!’ All we had to do was get him to safety,” said Officer Brunel Victor, 36, at a press conference at the station.

“I jumped onto the tracks and saved someone on Thanksgiving.”

Bokch and Victor were working overtime patrolling the 116th Street No. 6 train station in Spanish Harlem after their regular tours of duty when a homeless man suffering a dizzy spell fell onto the tracks, officials said. 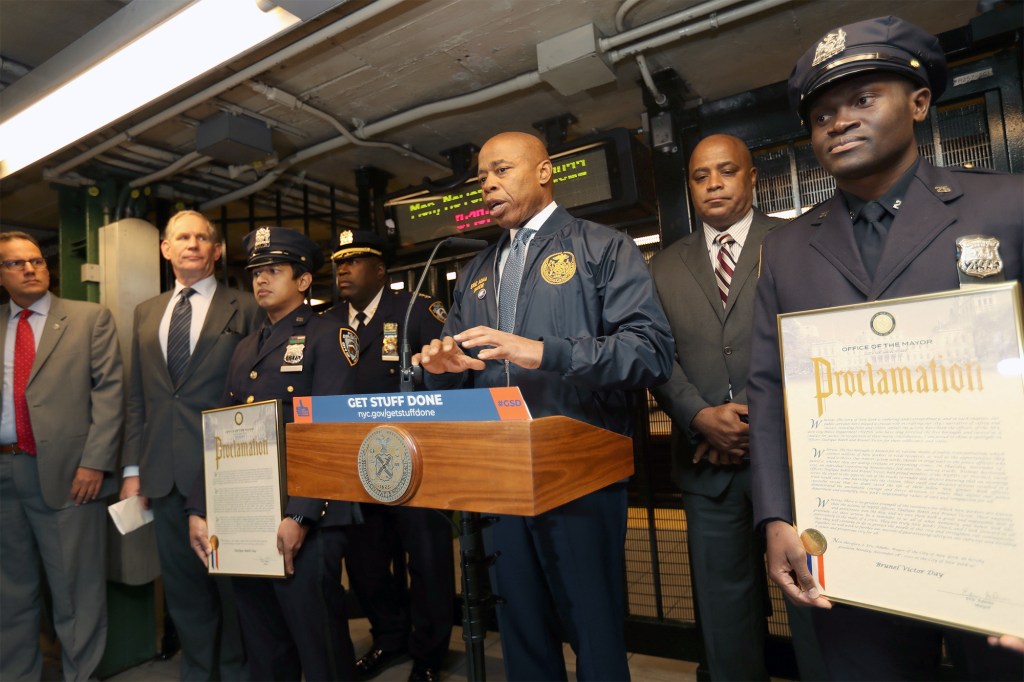 The pair were able to pull the man to safety in the nick of time with the help of an unidentified good Samaritan.

Asked if they were concerned that the train was roaring into the
station, the officers demurred.

“We were concerned about the safety of the person who just fell on the
tracks,” Bokch said.

Victor added, “We was just doing our job like we do on a daily basis.”

Mayor Eric Adams and police officials honored the officers at the scene Monday morning, while touting the effectiveness of the NYPD’s new beefed up subway patrol blitz.

The two cops were keeping watch over the station as part of an overtime initiative announced last month that puts 1,200 extra officers on subway patrol duty after their normal shifts to help combat crime.

“These officers are representative of how we’re going to fulfill our commitment and promise of regaining the safety in our subway system,” Adams said. “They embody the values of courage, caring and compassion.”

“The Blue surge in our subway system is working,” the Democrat claimed.

“Thanks to these officers, we’re making enormous strides in keeping the subway safe. Major felonies in subway are down 13 percent over the last 28 days [compared to 2021], and 5.4 percent down compared to 2017 levels when the city was at a historic low.”

City officials have yet to release the statistics backing up Adams’ claim about the past 28 days.

As The Post reported on its front page Monday, felony crimes on the subway were up 40% through October of this year compared to the same period in 2021, slightly outpacing the 38% post-pandemic increase in ridership.

Adams, a former transit cop, said the city is “moving in the right direction” in fighting subway crime, given the past-28-day figures, as he bestowed proclamations upon the heroic officers.

In addition to their fearless feat, Bokch, whose family hails from Bangladesh, and Victor, whose family is from Haiti, exemplify the NYPD’s commitment to diversity, according to Hizzoner.

Adams and Police Commissioner Keechant Sewell also extended their thanks to the mystery man that helped with the rescue.

“Good Samaritan, if you’re watching this, we wanna say thank you. You represent what’s best about our city,” Adams said.

“We want to tell him thank you so much. It is part of that shared responsibility of public safety that we have been saying all year long,” Sewell added.

“A man is alive today and will celebrate his birthday tomorrow because of your actions.”

Still, the cheerful event was not a rosy occasion for everyone.

A top police-union boss issued a statement blasting City Hall amid the celebration.

“Police Officers Victor and Bokth deserve far more than praise for their heroism. Like all New York City police officers, they are overworked and underpaid,” PBA President Pat Lynch said in a statement.

“They deserve a competitive salary that will reverse the current NYPD staffing emergency. Press conferences and mayoral proclamations will not stop cops from quitting in droves,” he said.

“If our city doesn’t immediately fix our low pay and brutal work schedule, there may not be a hero police officer available to help the next time a New Yorker is in distress in the subway.”