Legendary NFL quarterback Brett Favre said Thursday that it was “an honor” to become the latest sports star to play a round of golf with President Trump late last month.

Trump invited Favre to tee off at his National Golf Club in Bedminster, New Jersey on July 25. A three-time NFL Most Valuable Player, Favre said the outing was an “awesome experience,” adding that he and the president chatted about football and “never talked politics.”

“He was as nice and engaging as he possibly could be, considering what type of stress he’s under,” Favre said in an interview with Fox News. “But I’ll say this: I respect the office of the president of the United States, regardless of who’s in office. Had Barack Obama, George Bush, Bill Clinton, anybody during my era, had they asked me to play golf, I certainly would have jumped at the opportunity, simply because regardless of what they believe in, just to be asked is an honor.” 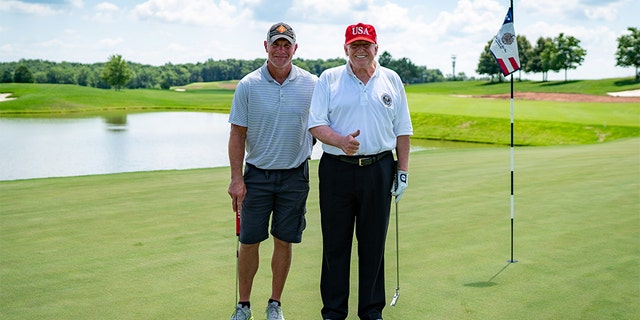 President Trump invited Favre to tee off at his National Golf Club in Bedminster, New Jersey on July 25.

Favre said he was “very impressed” with the president’s golf game. 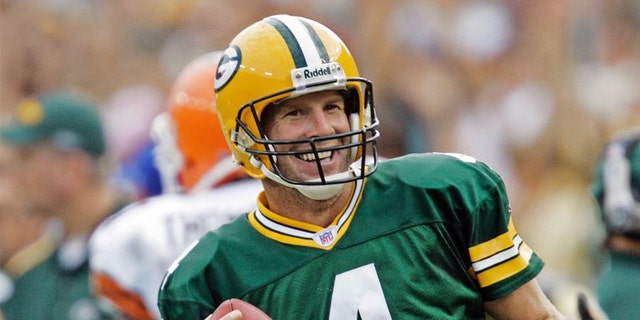 “We had a couple of holes where we picked up, no score was penciled in, but for the most part, he can play,” Favre said. “He hits the ball very good and I’ll also tell you this, he’s a fast golfer. There was times I had a 140-yard shot and he’s up there at the green with his putter, ready to go.”

Trump has had a thorny relationship with the NFL in the recent past, publicly criticizing protests against racial injustice during the national anthem. Favre, on the other hand, said earlier this summer that free agent quarterback Colin Kaepernick, who led the protests in 2016, deserves another chance in the NFL.

In a statement shortly after the golf outing, the White House said the president and Favre had “discussed the importance of sports as a critical unifying and uplifting part of the safe reopening of America."

Favre praised the president for his ability to handle the pressures of the Oval office.

“I said, ‘I don’t know how you do it, Mr. President, the stress, I can’t imagine.’ He said, ‘I love it.’ It takes a special person to want to face the things that he has to face every single day,” Favre said. “You’re damned if you do, damned if you don’t. If you please some, others are pissed. You please one that was pissed, the ones you were pleasing the day before, they’re pissed.”

Favre, 50, won a Super Bowl with the Green Bay Packers and also found success during stints with the New York Jets and the Minnesota Vikings. A three-time NFL MVP, Favre was inducted into the Pro Football Hall of Fame in 2016.

Barcelona announced Suarez's move to Atletico
Barcelona will receive 2 million euros for the transfer of Suarez in the seasons when Atletico reaches the 1/4 finals of the Champions League
Chelsea's newcomers came off in the League Cup: Havertz scored a hat-trick (the first of his career), Chilwell an assist, Silva played an hour
Manchester United will lose 139.39 million pounds if the Premier League season is held without spectators - the most in the League
Ruediger - Barcelona's priority transfer target
Arsenal have won 6 matches in a row
Inter midfielder vesino is In talks with Napoli. He was offered to Zenit
Source https://www.foxnews.com/politics/brett-favre-trump-golf-outing-president-skills?utm_source=feedburner&utm_medium=feed&utm_campaign=Feed%3A+foxnews%2Fmost-popular+%28Internal+-+Most+Popular+Content%29

Trump on Meghan Markle Telling Americans to Vote for Biden: ‘I Wish a Lot of Luck to Harry’

‘The Devil Will Be in the Details.’ How Social Media Platforms Are Bracing For Election Chaos

How a blast from the past could save NYC again

Trump on Meghan Markle: ‘I wish a lot of luck to Harry, because he’s gonna need it’

What does it take for NY politicians to say no to gun crime?

In remote learning, New York City is barely even pretending to teach

Mickey Rourke Enlists For ‘The Commando’

Young adults are now the largest group of Americans getting COVID-19, CDC says

He Has Worked With Both Stanley Cup Coaches. Who Is He Rooting For?

Heat vs. Celtics Game 4 Live Stream: How To Watch The NBA Live On ESPN

‘This Resets the Race.’ Why Trump’s Move to Fill the Supreme Court Vacancy Raises the Election’s Stakes

A newly discovered asteroid will pass close to Earth on Thursday

Who formally declares the winner of the US presidential election?

Twitter being sued for promoting Khalistan in India; PIL filed in Delhi HC

Who Is the Announcer on ‘Love Island’ USA? Meet Matthew Hoffman

What Is ‘Wanton Endangerment,’ the Charge in the Breonna Taylor Case?

Trump refuses to commit to peaceful transition of power

Quibi may be for sale. But what is it worth, and who would buy it?

Donald Trump Won’t Commit To Peaceful Transition After Election: “We’re Going To Have To See What Happens”

Craig Carton reveals he nearly killed himself: ‘Don’t do it!’

Health Experts Optimistic On Vaccine Approval By End of 2020

Variety and Hollywood Reporter, once rivals, are now under same roof

The Latest: Trump praises AG for handling of Taylor case

New York town of Swastika votes to keep its name

Trudeau's Throne Speech reads like a fairy tale. Can he make it reality?

Is Trudeau's Throne Speech a fairy tale or reality?

At UN, No Signals From Saudi King on Peace With Israel

Family of man shot by police pushes for charges

Racism has cost US economy $16 trillion in 20 years: Citi report

Vaccination effort will not be complete until July, CDC director says

Daniel Jones embarking on his biggest Giants challenge yet

What if Senate Democrats win BIG in November?