The leaders of the powerful National Rifle Association were accused Thursday of participating in a fraud scheme that contributed to $64 million in losses and financed lavish lifestyles featuring private jet travel to exclusive resorts, according to a lawsuit brought by New York Attorney General Letitia James, who seeks to shut down the gun rights organization.

“The NRA’s influence has been so powerful that the organization went unchecked for decades while top executives funneled millions into their own pockets,” James said. "The NRA is fraught with fraud and abuse, which is why today, we seek to dissolve the NRA, because no organization is above the law.” 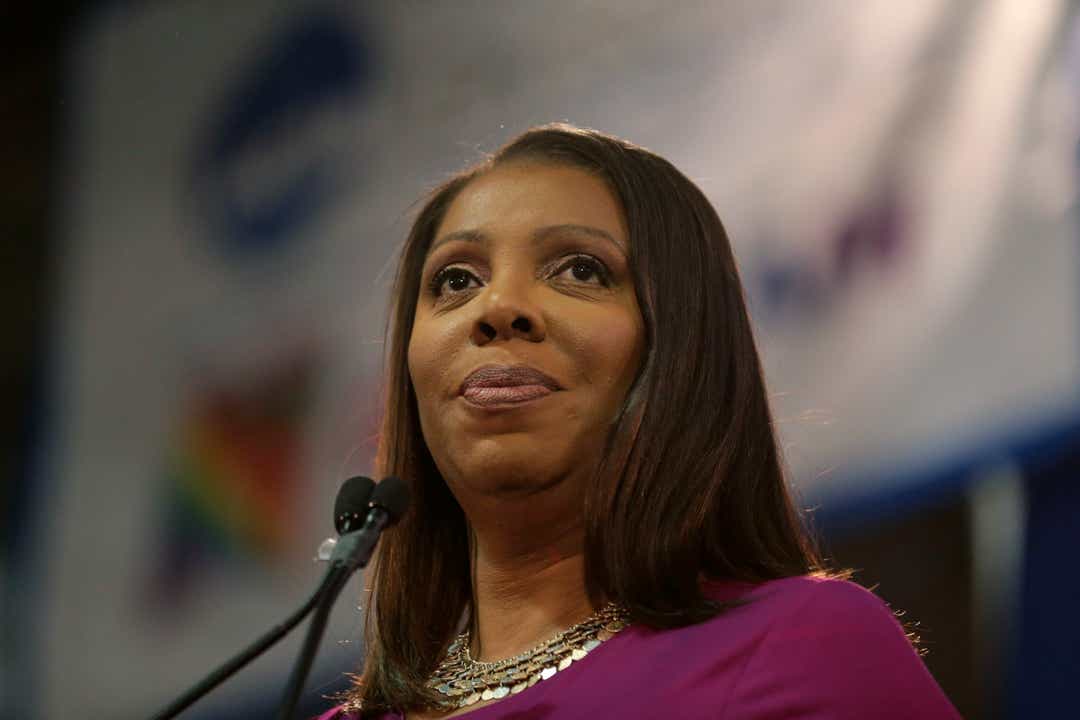 The NRA has been chartered in New York since the late 19th century, which grants James significant leverage to shut it down under state laws governing charities and nonprofit groups.

James accused the NRA leaders of wasteful, unchecked spending that transformed a $27.8 million surplus in 2015 to a $36.3 million net deficit in 2018.

The NRA, which quickly filed a countersuit against the attorney general, cast her action as a politically motivated, "premeditated attack on our organization and the Second Amendment freedoms it fights to defend."

"You could have set your watch by it," NRA President Carolyn Meadows said. "It’s a transparent attempt to score political points and attack the leading voice in opposition to the leftist agenda. This has been a power grab by a political opportunist – a desperate move that is part of a rank political vendetta. Our members won’t be intimidated or bullied in their defense of political and constitutional freedom.” 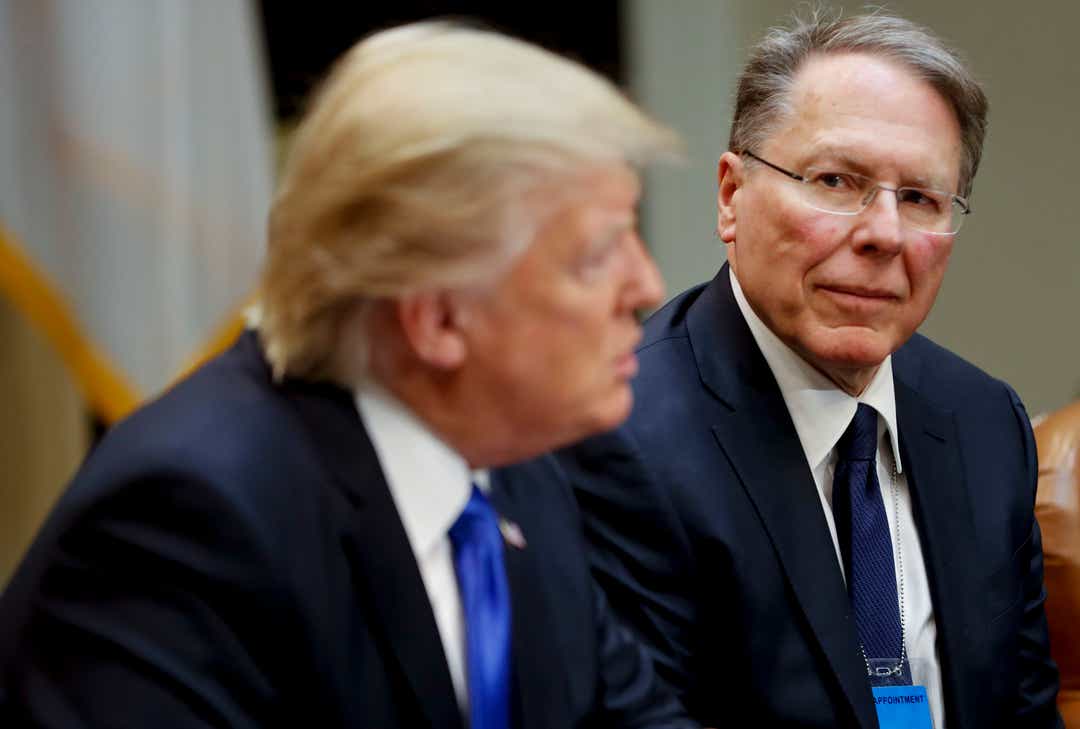 Meadows said the organization would "not shrink from this fight."

"We will confront it and prevail," she said.

In its lawsuit, the conservative organization accused James, a Democrat, of attempting to fulfill a campaign promise to "take down the NRA."

"To silence the NRA’s advocacy, and neutralize it as an opposing political force, James promised that she would leverage 'the constitutional power as an attorney general to regulate charities' to instigate a fishing expedition into the NRA’s ‘legitimacy,’ ” the organization claimed.

As the James lawsuit was announced, President Donald Trump's photo and the NRA's endorsement of the president's reelection was prominently featured on the group's website.

Departing the White House on Thursday, Trump called the lawsuit "a terrible thing" and suggested the NRA should “move to Texas and lead a ... beautiful life.” He said the group had been “decimated” by costs of recent legal actions and called it a “sad” situation.

Texas Attorney General Ken Paxton tweeted that the NRA would be welcomed "with open arms."

The NRA has built a reputation as the fiercest gun rights advocate in the nation since its incorporation in 1871, asserting itself as a major force in national politics and government.

Private trips to the Bahamas among allegations

The controversial organization, which boasts more than 5 million members, has faced financial and leadership turmoil, headlined by a public power struggle between LaPierre and NRA President Oliver North that ended in North's ouster last year.

James' lawsuit accuses the NRA and its leaders of a broad scope of lavish spending and disregard for state and federal laws that jeopardized the organization's financial standing.

•LaPierre, the NRA's chief executive and executive vice president since 1991, and his family are accused of traveling to the Bahamas on a private charter at least eight times over three years, costing the NRA $500,000. On some of those trips, an NRA vendor allowed him to use a 107-foot yacht.

•As the face of the organization, LaPierre is accused of spending more than $3.6 million in NRA funds on car services and travel consultants in the past two years, as well as teeing up a post-employment contract worth more than $17 million.

•Former treasurer and CFO Wilson "Woody" Phillips allegedly set up a $1.8 million consulting deal for himself just before his retirement and oversaw an arrangement in which Ackerman McQueen, an advertising and public relations firm, paid for NRA leaders' entertainment and travel costs before billing the organization. That arrangement is the subject of a separate legal dispute.

James launched an investigation into the NRA last year after news outlets, including The New Yorker and Trace, published investigations into the organization's leadership and precarious financial structure.

The attorney general's legal action claims the organization's institutional controls and audit capabilities should have caught much of the financial mismanagement that put the organization in peril.

James seeks to dissolve the group and have the four NRA leaders pay full restitution and penalties, including their salaries earned while employees of the association. She also seeks a court order barring the leaders from serving on any New York-based charitable boards.

“The NRA has lost its way," Brady Campaign President Kris Brown said. "Instead of advocating for common-sense gun policies that protect gun owners, families and communities, the NRA has instead become an extremist organization, focused on lining their own pockets and the pockets of the gun industry at the expense of all Americans."

Robyn Thomas, executive director of the Giffords Law Center, called the group a "shell of the juggernaut that once held dangerous sway over Washington."

"Wayne LaPierre and his allies sit at the center of a tangled web of corruption and self-dealing," Thomas said. "They are nothing more than crooks in fancy suits.”

There is precedent for the New York Attorney General's Office to force the dissolution of a high-profile charitable group.

In June 2018, then-Attorney General Barbara Underwood filed suit against Trump and the Donald J. Trump Foundation, accusing the president and his children of breaking oversight laws and using the charity to boost his presidential campaign.

Six months later, Underwood and the Trump Foundation agreed to a settlement that wiped out the charity's certificate of incorporation and ended its existence. Its $1.8 million in assets was distributed to other charities.

In addition to James' action Thursday, Washington, D.C., Attorney General Karl Racine filed a separate lawsuit against the NRA and the NRA Foundation, alleging that charitable funds were diverted for the benefit of the executives.

According to the lawsuit, the foundation was controlled by the NRA and "allowed the NRA to exploit it through risky multimillion-dollar loans – including a $5 million loan that the NRA has never repaid."

"Additionally, the foundation agreed to pay the NRA millions of dollars in fees without documentation of the work the NRA was performing or how it supported the foundation’s charitable purposes," the lawsuit claims.

Canidia about Messi: Leo gets lost and suffers when his team is not the best on the field
Lampard confirmed that goalkeeper Mendy is undergoing a medical at Chelsea
Neymar and defender Marcel Gonzalez can get up to 10 matches suspended
Manchester City - the first Premier League club to win the 1st match in 10 consecutive seasons
Bartomeu has suspended Suarez's transfer to Atletico. He doesn't want to let a player go to a competitor for free
Robinson on bale: one of the 10th anniversary deals for Tottenham and a world-class player
Fulham want to rent Leipzig striker Lukman
Source https://eu.usatoday.com/story/news/politics/2020/08/06/nra-lawsuit-ny-attorney-general-sues-shut-down-nra-over-fraud/3309412001/

Frontline’s ‘The Choice 2020: Trump vs. Biden’ Reveals How Candidates Early Crises Shaped The Rest Of Their Lives

NIH staffer to ‘retire’ after being exposed as anti-Fauci blogger: report

Column: Your power probably isn't shutting off, regardless of what the 'utility' says

How is Little Saigon curbing coronavirus? By respecting elders, authorities and masks

The Fitbit Sense is indeed a health watch, for better or worse

You can now personalize your iPhone home screen. People are already making it weird.

Why Rob Gronkowski has been invisible in Buccaneers offense

Smug Trump declares ‘virtually nobody’ is affected by COVID-19 as nation passes 200,000 dead

Stream It Or Skip It: ‘Filthy Rich’ On Fox, Where Kim Cattrall Schemes To Hold On To Her Family’s Christian TV Network And Fortune

What to Know About the Unemployment System ‘Reset’

Judge extends deadline for absentee ballots to be received in Wisconsin

Why do leaves change color?

Train for Four Top Business Analysis Exams with This One Bundle

Chipotle brings back its most popular new menu item

120,000-year-old footprints found in Saudi Arabia -- and they might be human

Russia’s FM laments sanctions at UN amid tension with West

Latest on 2020 election and SCOTUS battle

How Ginsburg’s Successor Could Remake Business

The Pentagon Got $1 Billion to Fight Coronavirus. It Went Shopping for Military Equipment Instead.

Who Will Control TikTok?

Pumpkin Picking In and Near New York City in 2020

People in this California town didn't have much. Then fire took it away

Column: She tried to rent motel rooms for homeless people. A NIMBY hospital stopped her

Family called 911 for son's mental health crisis. They say deputies beat and Tased him to death

Morning Digest: Our new forecast shows Democrats on track to flip the Senate but much is in play

The best $40 I ever spent: A not-quite-tarot deck

Republican senators fall in line to back moving ahead with Trump SCOTUS pick: 'We've got the votes'

'Rhea is calling you': Deepika Padukone brutally trolled after her name emerged in drug chats

Why Tesla's Battery Day is a big event for investors

Bahamian, US Police Seize More than $3 Million in Marijuana

What you need to know about coronavirus on Tuesday, September 22

Execution looms for ex-soldier who blamed witchcraft for killing

CNN's Lemon: 'We're going to have to blow up the entire system' if Democrats win back White House, Senate

The U.K. urged people to eat out and go to work. With cases surging, it's reversing course.

US To Put Murderer To Death as Federal Executions Spree Continues

Trump continues to get support from key age group ahead of election, poll finds