2.2 million migrants apprehended at border over past year

New York City Mayor Eric Adams declared a state of emergency on Friday over the arrival of thousands of migrants bused from the U.S. southern border in recent months, imploring the Biden administration for aid, as the city's overwhelmed shelters struggle to accommodate the recent arrivals.

Adams, a Democrat, said the city's shelters are running out of bed space, with more than 61,000 homeless New Yorkers and migrants — including 20,000 children — in its housing system. A fifth of those in shelters are migrants, he said. The city has also enrolled 5,500 recently arrived migrant children in public schools.

At the current pace, the local shelter system could find itself housing 100,000 individuals next year, Adams said. He added that the city also anticipates spending over $1 billion receiving and housing migrants by next July.

So far, New York City has converted over 40 hotels into makeshift shelters and is planning to set up a tent city on Randall's Island, but Adams said the city won't have the money or housing capacity to support thousands of additional migrants and at the same time, assist the domestic homeless population.

"We now have a situation where more people are arriving in New York City than we can immediately accommodate, including families with babies and young children," Adams said. "Once the asylum seekers from today's buses are provided shelter, we will surpass the highest number of people in recorded history in our city's shelter system."

Since the spring, more than 17,000 migrants, many of them asylum-seekers from Venezuela, Cuba, Nicaragua and other Latin American countries, have arrived in New York City on hundreds of buses that originated from the U.S.-Mexico border, according to city data.

Thousands of migrants are in New York because Texas state officials have been putting them on buses to New York City, Washington, D.C., and Chicago to protest the Biden administration's handling of the record border apprehensions reported over the past year.

Democratic officials in El Paso have also been offering free bus rides to New York City to migrants as part of an effort to alleviate overcrowding in local shelters, due largely to a sharp increase in the number Venezuelan asylum-seekers entering western Texas. 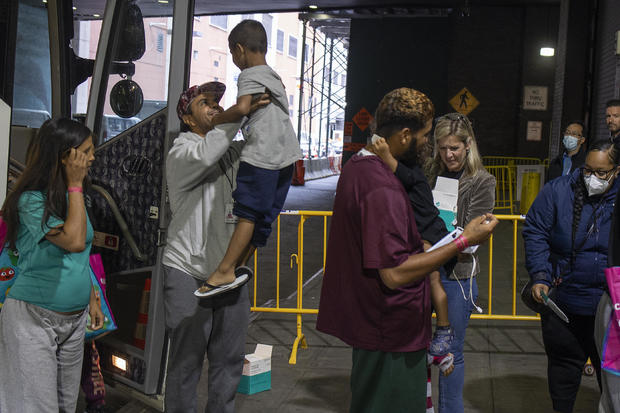 Buses of migrants who have been detained at the Texas border continue to arrive in New York, September 25, 2022 at the Port Authority bus terminal in midtown New York City, New York. Andrew Lichtenstein/Corbis via Getty Images

Adams on Friday said Republican state officials who have been sending migrants to New York were exploiting the city's welcoming values, social services and right-to-shelter laws for "political gain."

"We have not asked for this," he said. "There was never any agreement to take on the job of supporting thousands of asylum seekers. This responsibility was simply handed to us without warning as buses began showing up."

Renae Eze, a spokesperson for Texas Governor Greg Abbott, a Republican, called Adams' remarks hypocritical and countered that the mayor should be telling President Biden to implement tougher policies along the U.S.-Mexico border.

"The true emergency is on our nation's southern border where small Texas border towns are overrun and overwhelmed by hundreds of migrants every single day as the Biden administration dumps them in their communities," Eze said.

State data show Texas has transported more than 12,000 migrants to Democratic-controlled cities on 270 buses, including approximately 3,100 to New York City.

Adams also asked New York state to support the establishment of migrant relief centers. He implored Congress to pass laws that would expedite the process of allowing asylum-seekers to work in the U.S., which would allow them to find work in the city, and he wants lawmakers to overhaul the immigration system, including by legalizing undocumented immigrants already living in the U.S.

The federal government, Adams suggested, should also implement a "decompression strategy" along the U.S.-Mexico border to "slow the outflow of asylum seekers" and transport migrants to other cities "to ensure everyone is doing their part."

Neither the White House nor the Department of Homeland Security (DHS) responded to requests to comment on Adams' demands.

Camilo Montoya-Galvez is the immigration reporter at CBS News. Based in Washington, he covers immigration policy and politics.