After a pandemic pause, the White House hosts a formal gala honoring France. 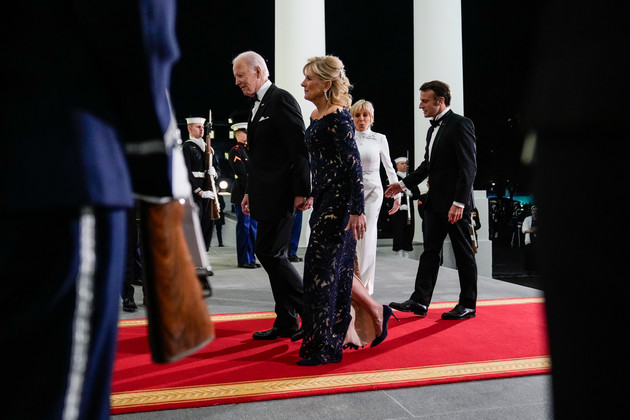 President Joe Biden and first lady Jill Biden welcome French President Emmanuel Macron and his wife Brigitte Macron as they arrive for a State Dinner on the North Portico of the White House, on Dec. 1, 2022. | Andrew Harnik/AP Photo

A glass pavilion on the South Lawn. A White House decked out for the holidays. A live performance by Grammy- and Oscar-winning musician Jon Batiste. Tables of Napa Valley wine and award-winning American cheeses. And 200 lobsters from Maine.

Biden’s first state dinner comes nearly two years into his first term, after the Covid pandemic put the pageantry on pause. The president’s selection of France as the guest is a testament to Biden and Macron’s close relationship — on full display Thursday as the two leaders referred to each other as “friend” in their chummy interactions, which included the French president frequently patting his U.S. counterpart on the back and referring to him as “Dear Joe.”

The ritzy affair comes after a long day of diplomatic discussions, in which the foreign leaders held a lengthy bilateral to discuss thorny subjects like the energy crisis in Europe, the Inflation Reduction Act’s impact abroad and Russia’s ongoing invasion of Ukraine. The leaders then held a joint press conference with more than a hundred members of the American and French press in the East Room of the White House.

But Thursday night, any growing tensions got set aside in favor of bottles of bubbly with notable French Americans, lawmakers and big names from the business and arts world.

Early arriving guests included late-night TV host — and Batiste’s former boss — Stephen Colbert and “Veep” actress Julia Louis-Dreyfus, who was asked by reporters as she was walked by whether she had ever attended a state dinner before. (She had!)

Two of the president’s children, Hunter Biden and Ashley Biden, as well as his sister, Valerie Biden, were expected to attend.

The guests will dine on butter-poached Maine lobster, caviar and beef with shallot marmalade — just a few of the menu items. The spread will also include an “American Artisanal Cheeses” course and finish with an orange chiffon cake and crème fraîche ice cream — a fancier spin on Biden’s favorite dessert.

It’s Macron’s second state dinner in a four-year span — he was also former President Donald Trump’s first in 2018. Trump, who wasn’t as keen on holding such events, had two during his presidency. He had a third planned for April 2020 to honor Spain’s king and queen, but the event was canceled due to the pandemic.

But at this point in Barack Obama’s presidency, he had held six state dinners.

One such high-profile dinner during the Obama administration was also the stage for a highly-publicized security stumble. A Virginia couple, both aspiring reality TV stars, managed to crash Obama’s first state dinner and meet the then-president in 2009, leading to a flood of D.C. social criticism and a full review of the breach.

Olivia Olander contributed to this report.

RBD is going on tour for the first time since 2008. We found tickets