Is it COVID? RSV? Or the flu? How to tell

Nearly 6 million Americans have taken Paxlovid for free, courtesy of the federal government. The Pfizer pill has helped prevent many people infected with COVID-19 from being hospitalized or dying, and it may even reduce the risk of developing long COVID. But the government plans to stop footing the bill within months, and millions of people who are at the highest risk of severe illness and are least able to afford the drug — the uninsured and seniors — may have to pay the full price.

And that means fewer people will get the potentially lifesaving treatments, experts said.

"I think the numbers will go way down," said Jill Rosenthal, director of public health policy at the Center for American Progress, a left-leaning think tank. A bill for several hundred dollars or more would lead many people to decide the medication isn't worth the price, she said.

In response to the unprecedented public health crisis caused by COVID, the federal government spent billions of dollars on developing new vaccines and treatments, to swift success: Less than a year after the pandemic was declared, medical workers got their first vaccines. But as many people have refused the shots and stopped wearing masks, the virus still rages and mutates. In 2022 alone, 250,000 Americans have died from COVID, more than from strokes or diabetes.

But soon the Department of Health and Human Services will stop supplying COVID treatments, and pharmacies will purchase and bill for them the same way they do for antibiotic pills or asthma inhalers. Paxlovid is expected to hit the private market in mid-2023, according to HHS plans shared in an October meeting with state health officials and clinicians. Merck's Lagevrio, a less-effective COVID treatment pill, and AstraZeneca's Evusheld, a preventive therapy for the immunocompromised, are on track to be commercialized sooner, sometime in the winter. 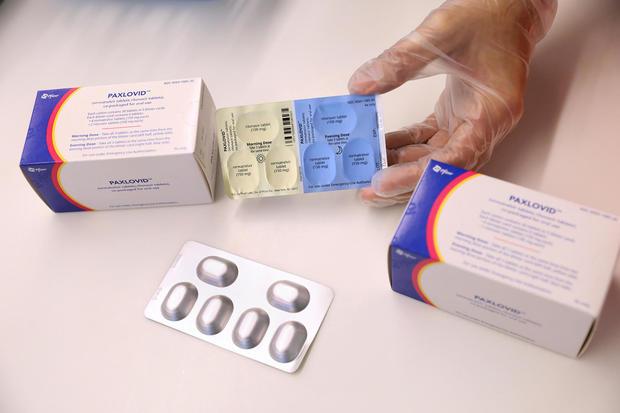 The antiviral drug Paxlovid can reduce the risk of severe illness or death from COVID-19. Chris Sweda/Chicago Tribune/Tribune News Service via Getty Images

The U.S. government has so far purchased 20 million courses of Paxlovid, priced at about $530 each, a discount for buying in bulk that Pfizer CEO Albert Bourla called "really very attractive" to the federal government in a July earnings call. The drug will cost far more on the private market, although in a statement to KHN, Pfizer declined to share the planned price. The government will also stop paying for the company's COVID vaccine next year — those shots will quadruple in price, from the discount rate the government pays of $30 to about $120.

Bourla told investors in November that he expects the move will make Paxlovid and its COVID vaccine "a multibillion-dollars franchise."

Nearly 9 in 10 people dying from the virus now are 65 or older. Yet federal law restricts Medicare Part D — the prescription drug program that covers nearly 50 million seniors — from covering the COVID treatment pills. The medications are meant for those most at risk of serious illness, including seniors.

Paxlovid and the other treatments are currently available under an emergency use authorization from the FDA, a fast-track review used in extraordinary situations. Although Pfizer applied for full approval in June, the process can take anywhere from several months to years. And Medicare Part D can't cover any medications without that full stamp of approval.

Paying out-of-pocket would be "a substantial barrier" for seniors on Medicare — the very people who would benefit most from the drug, wrote federal health experts.

"From a public health perspective, and even from a health care capacity and cost perspective, it would just defy reason to not continue to make these drugs readily available," said Dr. Larry Madoff, medical director of Massachusetts' Bureau of Infectious Disease and Laboratory Sciences. He's hopeful that the federal health agency will find a way to set aside unused doses for seniors and people without insurance.

In mid-November, the White House requested that Congress approve an additional $2.5 billion for COVID therapeutics and vaccines to make sure people can afford the medications when they're no longer free. But there's little hope it will be approved — the Senate voted that same day to end the public health emergency and denied similar requests in recent months.

Many Americans have already faced hurdles just getting a prescription for COVID treatment. Although the federal government doesn't track who's gotten the drug, a Centers for Disease Control and Prevention study using data from 30 medical centers found that Black and Hispanic patients with COVID were much less likely to receive Paxlovid than white patients. (Hispanic people can be of any race or combination of races.) And when the government is no longer picking up the tab, experts predict that these gaps by race, income, and geography will widen.

People in Northeastern states used the drug far more often than those in the rest of the country, according to a KHN analysis of Paxlovid use in September and October. But it wasn't because people in the region were getting sick from COVID at much higher rates — instead, many of those states offered better access to health care to begin with and created special programs to get Paxlovid to their residents.

About 10 mostly Democratic states and several large counties in the Northeast and elsewhere created free "test-to-treat" programs that allow their residents to get an immediate doctor visit and prescription for treatment after testing positive for COVID. In Massachusetts, more than 20,000 residents have used the state's video and phone hotline, which is available seven days a week in 13 languages. Massachusetts, which has the highest insurance rate in the country and relatively low travel times to pharmacies, had the second-highest Paxlovid usage rate among states this fall.

States with higher COVID death rates, like Florida and Kentucky, where residents must travel farther for health care and are more likely to be uninsured, used the drug less often. Without no-cost test-to-treat options, residents have struggled to get prescriptions even though the drug itself is still free.

"If you look at access to medications for people who are uninsured, I think that there's no question that will widen those disparities," Rosenthal said.

People who get insurance through their jobs could face high copays at the register, too, just as they do for insulin and other expensive or brand-name drugs.

Most private insurance companies will end up covering COVID therapeutics to some extent, said Sabrina Corlette, a research professor at Georgetown University's Center on Health Insurance Reforms. After all, the pills are cheaper than a hospital stay. But for most people who get insurance through their jobs, there are "really no rules at all," she said. Some insurers could take months to add the drugs to their plans or decide not to pay for them.

And the additional cost means many people will go without the medication. "We know from lots of research that when people face cost sharing for these drugs that they need to take, they will often forgo or cut back," Corlette said.

One group doesn't need to worry about sticker shock. Medicaid, the public insurance program for low-income adults and children, will cover the treatments in full until at least early 2024.

HHS officials could set aside any leftover taxpayer-funded medication for people who can't afford to pay the full cost, but they haven't shared any concrete plans to do so. The government purchased 20 million courses of Paxlovid and 3 million of Lagevrio. Fewer than a third have been used, and usage has fallen in recent months, according to KHN's analysis of the data from HHS.

Sixty percent of the government's supply of Evusheld is also still available, although the COVID prevention therapy is less effective against new strains of the virus. The health department in one state, New Mexico, has recommended against using it.

HHS did not make officials available for an interview or answer written questions about the commercialization plans.

The government created a potential workaround when they moved bebtelovimab, another COVID treatment, to the private market this summer. It now retails for $2,100 per patient. The agency set aside the remaining 60,000 government-purchased doses that hospitals could use to treat uninsured patients in a convoluted dose-replacement process. But it's hard to tell how well that setup would work for Paxlovid: Bebtelovimab was already much less popular, and the FDA halted its use on Nov. 30 because it's less effective against current strains of the virus.

Federal officials and insurance companies would have good reason to make sure patients can continue to afford COVID drugs: They're far cheaper than if patients land in the emergency room.

"The medications are so worthwhile," said Madoff, the Massachusetts health official. "They're not expensive in the grand scheme of health care costs."

KHN (Kaiser Health News) is a national newsroom that produces in-depth journalism about health issues. Together with Policy Analysis and Polling, KHN is one of the three major operating programs at KFF (Kaiser Family Foundation). KFF is an endowed nonprofit organization providing information on health issues to the nation.