Vice President Mike Pence will return to Georgia on Friday to hit the campaign trail in the state’s twin Jan. 5 Senate runoff elections, where the Republicans' Senate majority is at stake.

The vice president will team up at a “Defend the Majority Rally” in the coastal city of Savannah with Republican Sens. David Perdue and Kelly Loeffler, the GOP candidates in the runoffs.

It’s Pence’s second trip to campaign in Georgia. He made stops on a bus tour with with Perdue and Loeffler in the northern Georgia cities of Canton and Gainesville on Nov. 20. 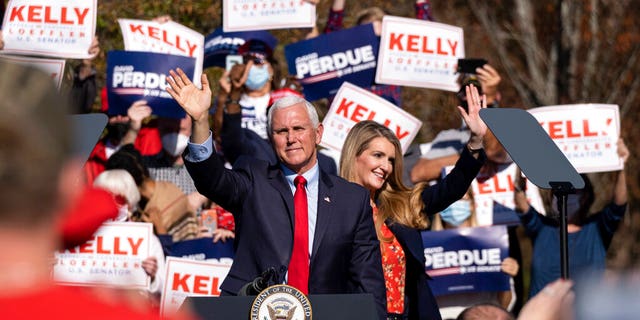 Pence’s visit on Friday comes one day before President Trump is scheduled to parachute into Georgia to campaign on behalf of Perdue and Loeffler.

The current balance of power for the next Senate coming out of this month’s elections is 50 Republicans and 48 Democrats. That means, Democrats must win both of Georgia’s runoff elections to make it a 50-50 Senate. If that occurs, Vice President-elect Kamala Harris would be the tie-breaking vote, giving her party a razor-thin majority in the chamber.

In Georgia, where state law dictates a runoff if no candidate reaches 50% of the vote, Perdue narrowly missed avoiding a runoff, winning 49.75% of the vote. Democratic challenger Jon Ossoff trailed by roughly 87,000 votes.

In the other race, Loeffler captured nearly 26% of the vote in a whopping 20-candidate special election to fill the final two years of the term of former GOP Sen. Johnny Isakson. Democratic candidate Rev. Raphael Warnock won nearly 33% of the vote.

Former President Barack Obama is starring in the Ossoff campaign’s latest TV commercial. The former president touts that Ossoff “has dedicated is career to fighting injustice” and will push to pass a new Voting Rights Act if elected.

The ad uses clips from Obama at a Nov. 2 rally in Atlanta, where the former president joined Ossoff and Warnock and also campaigned on behalf of Joe Biden. The president-elect narrowly edged Trump in Georgia, becoming the first Democrat to carry the state in a White House race in more than a quarter century.

Hoping to prevent a drop off in turnout among Democratic voters – and especially Black voters – in the Jan. 5 runoff elections, Obama emphasizes in the spot that "if we vote like our lives depend on it, because they do, we will elect Jon Ossoff to the United States Senate.”

The Ossoff campaign says the commercial will start running  statewide on Tuesday as part of their seven-figure weekly ad buy.

Every time Messi doesn't play, Barcelona wins. Ex-Argentina goalkeeper Gatti about Leo
Barca's debt is 1.2 billion euros. The club wants to postpone loan repayments
Jordi Alba: I understand why people might hate me. I really play hard
Real Madrid will be able to pay Mbappe about 21 million euros a year. PSG will offer the Frenchman a salary of 36 million euros-like Neymar
Udinese sign Fernando Llorente, Cutrone and sell Lasagna to Verona for 10 million euros
Monaco have re-loaned Onyekuru to Galatasaray
Karavaev on the Eredivisie: The fans are used to goals. Even if the team lost 2:3, they are happy
Source https://www.foxnews.com/politics/pence-returns-to-georgia-obama-stars-new-ossoff-ad

Imperial Order of the Crown of India: Patricia Mountbatten's rare collection to go under hammer

Live Updates: Biden weighs in on Trump impeachment, says Dems won't have the votes to convict

MyPillow CEO Mike Lindell has been banned from Twitter

Republic Day: ITBP jawans march with Tricolour at a height of 17,000 feet

Larry King remembered by Suzanne Somers: 'Not many people like him'

US offers to host 2021 Olympics amid coronavirus crisis | Details inside

On immigration, Biden seeks a new approach to an old deadlock

Biden walking a high wire with Russia ahead of Putin call

‘THIS IS ME’: Rioters flaunt involvement in Capitol siege

Analysis: The China trade war is one thing Biden won't be rushing to fix

Trump impeachment goes to Senate, testing his sway over GOP

Requiem for the ‘Godfather of Pro-Life Activism’

Stand Down @jack: Why the First Amendment Needs to Be Applied to Social Media

Accused Capitol rioter from NY identified thanks to varsity jacket

Use the Climate Issue to Save the Anglo-American Alliance

McBride, No. 11 West Virginia rally past No. 10 Texas Tech

Conan O’Brien Celebrates Larry King’s Humorous Side, Costumes And All

Richard Lewis Will Not Appear in ‘Curb Your Enthusiasm’ Season 11

11 of 22 Chinese miners trapped in gold mine rescued, ten others dead

Masahiro Tanaka’s time with Yankees seems to be ending