MALANG, Indonesia — An Indonesian police chief and nine elite officers were removed from their posts Monday and 18 others were being investigated for responsibility in the firing of tear gas inside a soccer stadium that set off a stampede, killing at least 125 people, officials said.

Distraught family members were struggling to comprehend the loss of their loved ones, including 17 children, at the match in East Java’s Malang city that was attended only by hometown Arema FC fans. The organizer had banned supporters of the visiting team, Persebaya Surabaya, because of Indonesia’s history of violent soccer rivalries.

The disaster Saturday night was among the deadliest ever at a sporting event.

Read More: What to Know About the Stampede at an Indonesian Soccer Match That Left At Least 125 Dead

Arema players and officials laid wreaths Monday in front of the stadium.

“We came here as a team asking forgiveness from the families impacted by this tragedy, those who lost their loves ones or the ones still being treated in the hospital,” head coach Javier Roca said.

On Monday night, about a thousand soccer fans dressed in black shirts held a candlelight vigil at a soccer stadium in Jakarta’s satellite city of Bekasi to pray for the victims of the disaster. 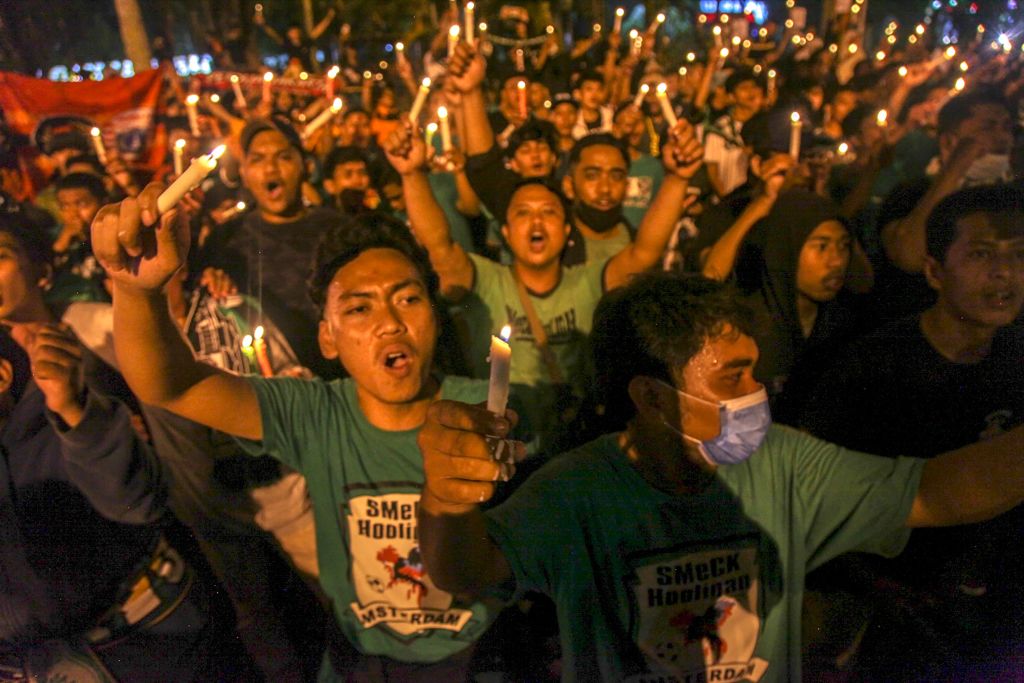 Indonesians hold a candlelight vigil for victims of a stampede, in Medan on Oct. 3, 2022.

Witnesses said some of the 42,000 Arema fans ran onto the pitch in anger on Saturday after the team was defeated 3-2, its first loss at home against Persebaya in 23 years. Some threw bottles and other objects at players and soccer officials. At least five police vehicles were toppled and set ablaze outside the stadium.

But most of the deaths occurred when riot police, trying to stop the violence, fired tear gas, including in the stands, triggering a disastrous stampede of fans making a panicked, chaotic run for the exits. Most of the 125 people who died were trampled or suffocated. The victims included two police officers.

Read More: As the Kanjuruhan Tragedy Shows, Indonesia Has Not Resolved Its Long-Standing Problem of Soccer Violence

At least 17 children were among the dead and seven were being treated in hospitals, the Ministry of Women’s Empowerment and Child Protection said. Police said 323 people were injured in the crush, with some still in critical condition.

He said 18 officers responsible for firing the tear gas, ranging from middle- to high-ranking, were being investigated.

Police are questioning witnesses and analyzing video from 32 security cameras inside and outside the stadium and nine cellphones owned by the victims as part of an investigation that will also identify suspected vandals, he said.

The parents and other relatives of Faiqotul Hikmah, 22, wailed Monday when an ambulance arrived at their home with her body wrapped in white cloth and a black blanket. She died while fleeing to exit 12 at Kanjuruhan Stadium. 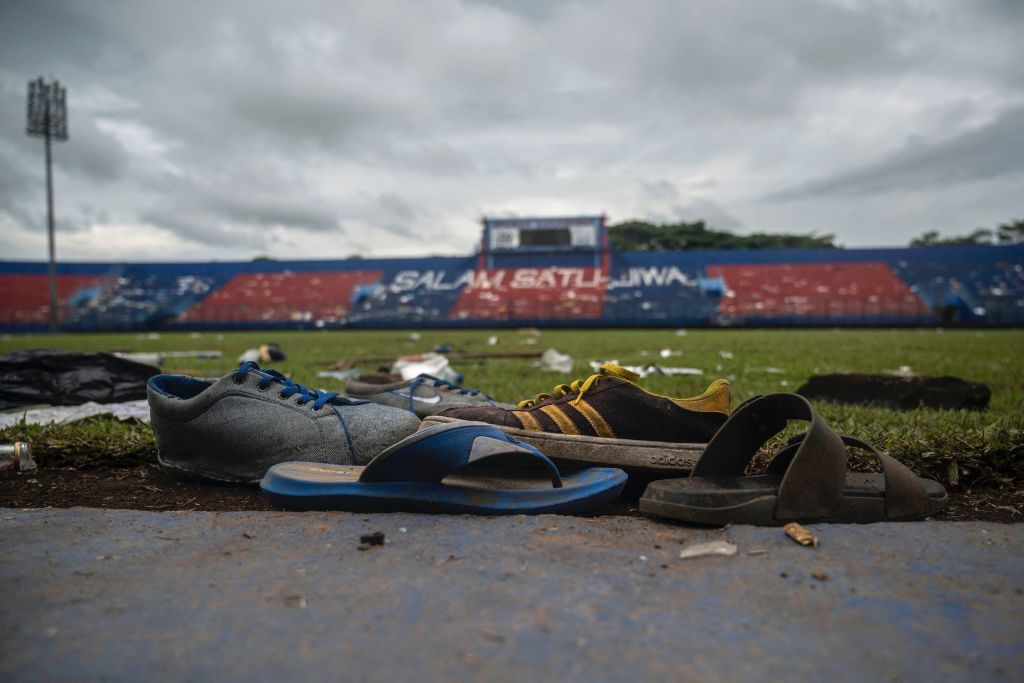 Discarded shoes sit by the pitch at Kanjuruhan stadium days after a deadly stampede following a football match in Malang, East Java, on Oct. 3, 2022.

A dozen friends had traveled with her to see the match, but Hikmah was one of only four who were able to enter the stadium because tickets were sold out, her friend, Abdul Mukid, said Monday. He later bought a ticket from a broker after hearing of the chaos inside the stadium in order to search for Hikmanh.

“I have to find her, save her,” Mukid recalled thinking.

Mukid found Hikmah’s body laid at a building in the stadium compound, with broken ribs and bluish bruises on her face. He learned that a second friend had also died from other friends who called him while he was in an ambulance taking Hikmah’s body to a hospital.

“I can’t put into words how much my sorrow is to lose my sister,” said Nur Laila, Hikmah’s older sibling. “She was just a big Arema fan who wanted to watch her favorite team play. She shouldn’t die just for that,” she said, wiping away tears.

Arema FC President Gilang Widya Pramana expressed his sadness and deepest apologies to the victims and the Indonesian people, and said he is ready to take full responsibility for the tragedy at his team’s stadium.

He said the management, coach and players were in shock and speechless.

“I am ready to provide assistance, even though it will not be able to return the victims’ lives,” Pramana said at a news conference Monday at Arema’s headquarters in Malang.

“This incident was beyond prediction, beyond reason … in a match watched only by our fans, not a single rival supporter,” he said, sobbing. “How can that match kill more than 100 people?” 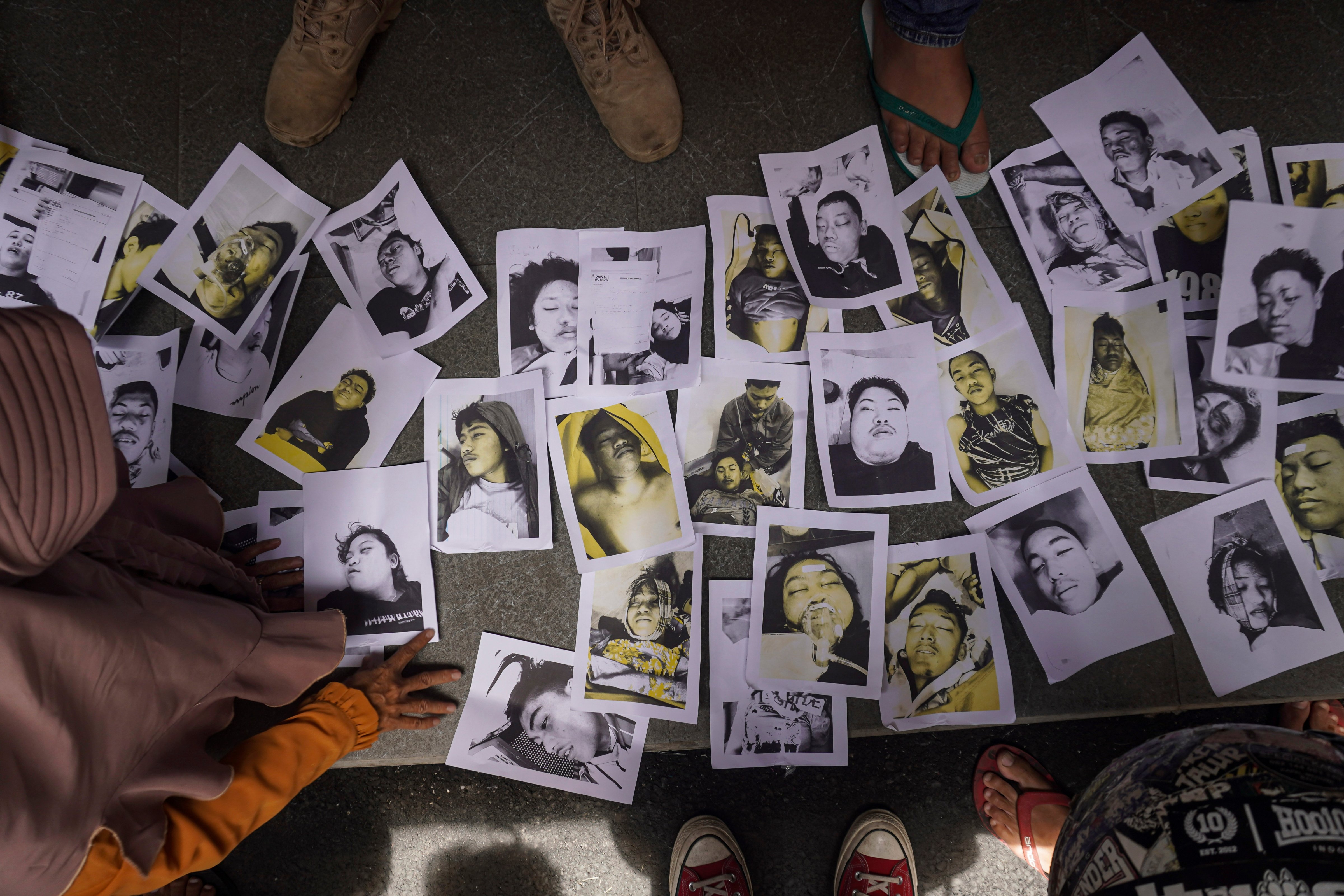 He said Arema FC is ready to accept any sanctions from Indonesia’s Soccer Association and the government, and “hopefully, it will be a very valuable lesson.”

Security Minister Mohammad Mahfud said he will lead an inquiry that will examine law violations in the disaster and provide recommendations to the president to improve soccer safety. The investigation is to be completed in three weeks.

Mahfud instructed the national police and military chiefs to punish those who committed crimes and actions that triggered the stampede.

“The government urged the national police to evaluate their security procedures,” Mahfud said at a news conference.

Despite Indonesia’s lack of international prominence in the sport, hooliganism is rife in the soccer-obsessed country where fanaticism often ends in violence. Data from Indonesia’s soccer watchdog, Save Our Soccer, showed 78 people have died in game-related incidents over the past 28 years.

Saturday’s game was among the world’s worst crowd disasters in sports, including a 1996 World Cup qualifier between Guatemala and Costa Rica in Guatemala City in which over 80 died and more than 100 were injured. In April 2001, more than 40 people were crushed to death during a soccer match at Ellis Park in Johannesburg, South Africa. In February 2012, 74 people were killed and more than 500 injured after a match between rivals al-Masry and al-Ahly when thousands of al-Masry fans invaded the field and attacked visiting supporters. The Egyptian league was suspended for two years as a result.