In a statement shared with CBS News, William said he and Kate were "delighted to be back in the United States" and thanked Governor Charlie Baker and his wife, Lauren Baker, for their "warm welcome" to Boston. Their first day in Massachusetts included a visit to Boston City Hall with the governor and Boston Mayor Michelle Wu, and the couple also planned to attend Wednesday night's Celtics game.

"On this, our first overseas visit since the death of my grandmother (Queen Elizabeth II), I would like to thank the people of Massachusetts and particularly of Boston for their many tributes paid to the late Queen. She remembered her 1976 bicentennial visit with great fondness," William added. 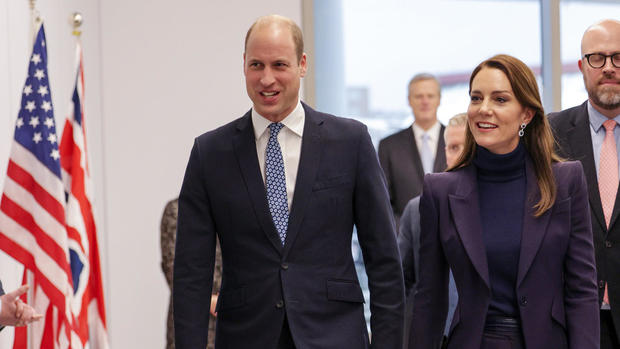 On the trip, the royals will focus on environmental innovation and climate change solutions, stopping at Greentown Labs in Sommerville, Massachusetts, and meeting with local organizations responding to rising sea levels in Boston. The pair will also visit Harvard University's Center on the Developing Child and highlight the work of Roca, Inc., an organization that aims to improve lives by addressing racism, poverty and incarceration.

On Friday, the pair will announce the winners of the Earthshot Prize, an award that William and David Attenborough launched in 2020. There are 15 finalists for the five awards. The ceremony is taking place in Boston because it was the birthplace of former president John F. Kennedy, whose "moonshot" speech about America's space race inspired William and his partners to reach similar goals in the race to slow climate change, according to the award's website. Several Boston landmarks, including City Hall and the JFK Library, will be lit up green during the royal visit to celebrate the prize, CBS Boston reports.

"My grandmother was one of life's optimists. And so am I. That is why last year we launched the Earthshot Prize with the ambition to create a truly global platform to inspire hope and urgent optimism as we look to save the future of our planet," William said in the statement. "To the people of Boston, thank you. I'm so grateful to you for allowing us to host the second year of the Earthshot Prize in your great city. Catherine and I can't wait to meet many of you in the days ahead."

It was also announced that the royal couple will meet with President Joe Biden, who will be in Boston on Friday to participate in a reception for the Democratic Senatorial Campaign Committee.

This is the first overseas trip the royal couple have made since inheriting their new titles, a change that came after the death of Queen Elizabeth. While there were concerns that the monarch's death would impact the trip, it has proceeded as scheduled.