Ready for School to Start? For Most Students, Not So Fast.

Weather: Partly sunny, breezy and cooler, with a high from the mid-60s to near 70. Over the weekend, it’ll be sunny and crisp, with highs in the mid-60s. 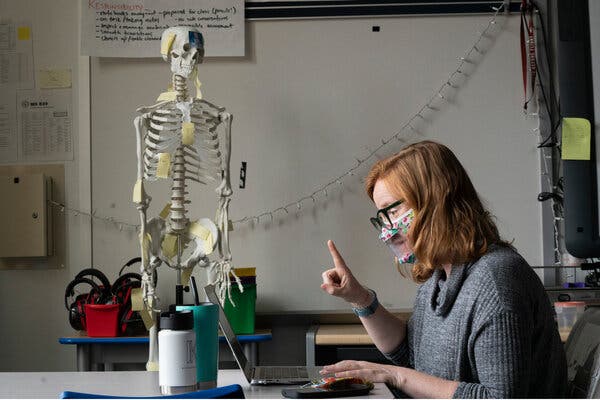 Mayor Bill de Blasio announced on Thursday that most of them will have to wait a little more.

The decision came only days before schools were set to open their doors on Monday, and led to frustration and anger for many of the people involved, especially parents, who now have to make arrangements for their children with little lead time.

[New York City will again delay start of in-person classes for most students.]

Here’s what you need to know about the new plan, and the rationale for it:

In-person learning will resume in phases instead of all at once. Next Monday, pre-K and advanced special-needs classes will open; on Sept. 29, elementary schools will begin; and middle and high schools will start up on Oct. 1.

On Monday, many students will start the school year remotely, like those in most big cities around the country, which have opted to stick with online learning.

The phased approach is a dramatic, 11th-hour change from the original reopening plan, which we detailed earlier this week.

“We are doing this to make sure that all the standards we’ve set can be achieved,” Mr. de Blasio said on Thursday.

Mr. de Blasio said he was persuaded to further delay reopening after a lengthy conversation with the heads of the teachers’ and principals’ unions and senior mayoral aides on Wednesday.

The mayor said one of the main reasons for the latest delay was an acute teacher shortage, an issue that had led the union leaders to warn for weeks that schools were not ready to reopen.

Mr. de Blasio did not elaborate on why he waited so long to recognize the gravity of the staffing issue, which arose because the city and the teachers’ union agreed that educators should not be required to teach both remotely and in person — so schools essentially need two sets of teachers.

The principals’ union estimated that the city could need as many as 10,000 educators; a Thursday report from the city’s Independent Budget Office put the number closer to 12,000.

Earlier this week, Mr. de Blasio announced that the city planned to hire 2,000 more educators, and on Thursday he said the city would add an additional 2,500.

Many educators, parents and elected officials were furious about the delay, especially since it came with so little warning. Hundreds of principals had publicly beseeched the city for weeks to hold back in-person classes, only to hear about the delay on the news.

“I’m beginning to think this is part of a secret plan to mentally and emotionally break me,” Michael Perlberg, the principal of a middle school in Brooklyn, wrote on Twitter.

Some parents, many of whom now have to scrape together child care plans in a few days, were also upset.

“It is mid-September and there is still no plan on how to educate children,” said Natasha Capers, a parent who lives in Brooklyn, adding that putting off school even longer felt like “a punch in the gut.”

At a news conference on Thursday, Mr. de Blasio did not exactly apologize to parents for the last-minute change of plans, though he said that he sympathized with them and appreciated their pragmatism.

“I think they understand we are going through a pandemic,” Mr. de Blasio said. “They understand that everyone is working nonstop trying to fix these really complex problems, and I know they will find a way forward.”

There is still a chance that in-person schooling could be canceled outright: Schools will close automatically if the city’s average coronavirus positive test rate reaches 3 percent.

New York State’s comptroller released an audit charging that the city’s sanitation department is not keeping the streets as clean as it could, which the department disputes. [Daily News]

The latest on how schools are reopening amid the pandemic.

New York police officers have been ticketing street food vendors, three months after the mayor said they would stop. [The City]

The schools chancellor said that the hacking of a Brooklyn school’s remote learning class looked like an inside job. [NY Post]

And finally: Your virtual social weekend

Although many performance spaces and community centers are closed, people are finding creative ways to connect through virtual events and programs. Here are suggestions for maintaining a New York social life this weekend while keeping a safe distance from other people.

Food for Resilience: Trans-Atlantic lessons from community gardens and farms

On Friday at 10 a.m., join community gardeners and urban farmers in New York and across the world in a conversation about how they’re responding to the pandemic, how to build solidarity in the neighborhood and how they contribute to food security.

R.S.V.P. for the free event through the event page.

Attend a free creative writing workshop for adults with disabilities on Friday at 11 a.m. The class will focus on nonfiction writing and will include a discussion of the works of Edgar Allan Poe.

On Friday at 1 p.m., stargaze and learn about the constellations. Join the American Museum of Natural History’s director of astrovisualization, Carter Emmart, and the astrophysicist Jackie Faherty for a tour of the night sky.

I was visiting a friend who lived in the West Village. After she went to work, I wandered down Waverly Place to an outdoor cafe.

Sipping a cappuccino, I knocked my water glass onto the sidewalk. I apologized profusely as the server swept up the broken glass.

From there, I took the subway to the Bronx Zoo. When I got there, I wept while I watched the gorillas behind glass walls.

Later I walked to Arthur Avenue and went into a restaurant. It was after lunch but before dinner. I felt a little melancholy eating a bowl of pasta and then a tiramisù in an otherwise empty dining room.

When the server brought me the check, she knocked over a glass. It shattered across the floor.

She brought me two Band-Aids. I stretched one over a tiny cut on my leg and put the other in my pocket.

Later, in the subway station, a man approached me, his palm extended. I could see that his hand was bleeding.

Hans-Dieter flick: I Hope Alaba will sign a contract with Bayern. Our club is one of the best in the world
Diego Maradona: Messi gave Barca everything, brought them to the top. He was not treated the way he deserved
Federico Chiesa: I hope to leave my mark in Juve. We will achieve great results
The Coach Of Benfica: I don't want us to look like the current Barcelona, it has nothing
Guardiola on returning to Barca: I'm happy at Manchester City. I hope to stay here
Fabinho will not play with West ham due to injury
Ronald Koeman: Maradona was the best in his time. Now the best Messi
Source https://www.nytimes.com/2020/09/18/nyregion/new-york-schools-delayed.html

'Chappelle's Show' coming to Netflix and HBO Max in November

Cuomo to wait until after 2020 election before taking budget action, report says

What Keeps Facebook’s Election Security Chief Up at Night?

Do Dunkin’ and Arby’s Go Together? Private Equity Group Bets $11 Billion They Do

‘Filthy Rich’ & ‘NeXt’ Canceled At Fox

How to Take On the Tech Barons

Broadband Is Not A Luxury

‘Filthy Rich’ and ‘Next’ Canceled After Single Seasons at Fox (EXCLUSIVE)

Gov. Andrew Cuomo reacts to Chelsea Handler's crush on him

Why moon ice is a huge deal

Megan Rapinoe and Sue Bird get engaged after four years together

Brace yourself: Why it may take weeks to settle the 2020 election

Kenya Barris In Talks With ViacomCBS To Partner In New Studio, Eyes Exit From Netflix Deal

Where the candidates are right now -- and what it tells us

‘His House’ DP on Framing the Horror of the Refugee Experience

Column: Where were you on election night 2016? We all remember. And it makes a lot of us anxious.

Jason Pierre-Paul on facing Giants: ‘I’m coming for their necks’

U.S. Expels Migrant Children From Other Countries to Mexico

Election season unlike any other nears finish line

Gun sales are soaring. And it's not just conservatives stocking up

Breaking Down MGM’s Costly ‘No Time to Die’ Dilemma

Daylight Savings Time: A few ways to face SAD, according to experts