BOSTON — On Sept. 11, 1985, two standout pitchers, Dwight Gooden of the Mets and John Tudor of the St. Louis Cardinals, faced off at Shea Stadium in a matchup for the ages. Gooden fired nine scoreless innings; Tudor threw 10. The Cardinals won, 1-0, in the 10th inning when Cesar Cedeno smashed a home run off Jesse Orosco.

The showdown at Fenway Park on Sunday had all the ingredients to match that classic. Until Jacob deGrom and Chris Sale took the mound here, that Gooden-Tudor clash was the last between two starting pitchers each with at least 100 innings and an earned run average below 2.00, according to the Elias Sports Bureau.

Even though the Red Sox (103-47) and the Mets (69-80) could hardly be further apart this season, there was still motivation for both sides.

DeGrom, 30, was trying to maintain his status as the favorite for the National League Cy Young Award. Sale, 29, would probably be atop the American League Cy Young race if not for the inflammation in his throwing shoulder that sent him to the disabled list twice this season. But he can find solace in his quest for a bigger prize in October.

An epic pitchers’ duel was not to be, however, as the Red Sox won, 4-3. In his second start since returning from injury, Sale was limited to three innings. By the bottom of the third, deGrom trailed 3-0.

Facing the highest-scoring offense in baseball, deGrom endured a rare uneven performance by his standards, surrendering three runs over seven innings while striking out 12. As usual, he received little help from his teammates.

DeGrom’s command wavered in the third. He coughed up back-to-back singles to Rafael Devers and Christian Vazquez. Mookie Betts drove in the first run with a sacrifice fly, and then Brock Holt slammed a two-run homer.

“I’ve got to be better than that,” deGrom said.

True to form, deGrom regrouped and tossed four more innings. His E.R.A. rose to 1.78 from 1.71, but with two more starts left, deGrom still holds a sizable lead in E.R.A. over Philadelphia’s Aaron Nola (2.42) and Washington’s Max Scherzer (2.53) in the N.L. He earned the admiration of his opponents.

“I know the voting is tough, but he should win the Cy Young in the National League,” Red Sox Manager Alex Cora said. 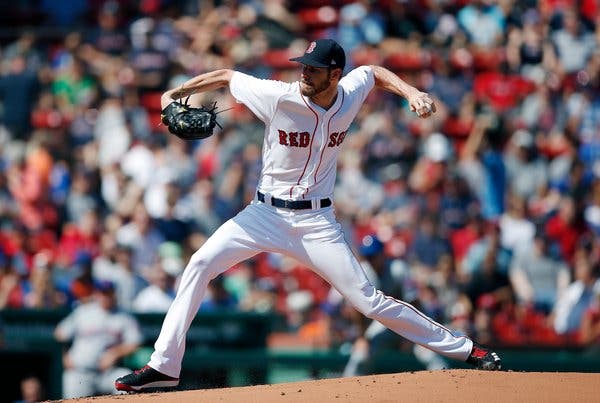 Chris Sale was limited to 42 pitches in his second start since returning from an injury.CreditMichael Dwyer/Associated Press

Added Sale, a college rival of deGrom’s and a fellow Central Florida native, “Right now, he’s the best pitcher in the league.”

The Mets clawed back in the sixth and seventh innings to tie the score, but too many little mistakes doomed them. Andrew Benintendi’s sacrifice fly off Mets relief pitcher Seth Lugo drove in Tzu-Wei Lin in the eighth inning to give the Red Sox the winning run.

By then, Sale was long out of the game. It is a testament to the strength of this Red Sox squad that, without Sale for a month and a half, they remained on pace to break the 1912 team’s franchise record of 105 wins. The Red Sox secured a playoff spot last week and could clinch the A.L. East this week in the Bronx against the Yankees.

Sale came off the disabled list last week and threw 26 pitches in only one inning. Based on the way he pitched on Sunday — 97-miles-per-hour fastballs and only one hit allowed — he probably could have thrown much more than three innings. But the Red Sox stuck to their plan, so Sale left the game after 42 pitches and went to the bullpen to throw a bit more. His shaved his E.R.A. by a hair, to 1.92.

“This is part of the process of building up,” he said. “It’s not that I’m still injured or hurting. I can’t sit out three weeks and pitch nine innings.”

The Red Sox can squeeze in two more starts for Sale before the regular season ends. If he adds a few innings each start, Sale could presumably be able to handle 100 pitches in a start come playoff time.

Because of their healthy division lead, the Red Sox have the luxury of aligning their team and granting proper rest in preparation for the postseason. That will also benefit right fielder Betts, who left Sunday’s game in the sixth inning because of soreness in his left side. One of the best players in the A.L., he has missed time this summer with a left abdominal strain.

“I was not going to take any chances,” Cora said.

Betts said he had been dealing with the discomfort for a few days but expected to be back in the lineup on Tuesday.

When the playoffs begin in more than two weeks, the Mets will be home while the Red Sox pursue their ninth World Series title. Individual awards will have to wait until their November announcement. Neither has won a Cy Young Award, but deGrom is in better position than Sale to claim his first.

In many ways, DeGrom trails only Gooden for the best-pitched season in Mets history. After that 1985 showdown between Gooden and Tudor, Gooden ended the season with 1.53 E.R.A. Tudor finished second in the N.L. Cy Young Award voting. The winner? Gooden.

Manchester City players have congratulated Liverpool on the championship corridor. The empty stadium looked sluggish
De Bruyne broke the personal record for goals in a season in the championship – 11 goals
Atalanta captain Gomez is the first Serie A player in the twenty-first century to give 15 assists in a season
Manchester City arranged a championship corridor for Liverpool
Mohamed Salah: I hope to stay in Liverpool for a long time
La Liga President: Many try to justify failures on the field by talking about rest and schedule
Rivaldo on Griezmann: I Don't understand why the world champion and multi-million dollar transfer only comes out at the last minute
Source https://www.nytimes.com/2018/09/16/sports/baseball/degrom-sale-mets-red-sox.html?partner=rss&emc=rss

Can our immune system 'remember' the coronavirus? Scientists hope so.

17 of the best running shorts to shop now

Which Bay Area beaches and parks are open July 4 weekend

NYC schools will reopen in the fall, the mayor says. The governor says not so fast

Twins' Trevor May on MLB's return: 'We're all just waiting for bad news'

Review: Paul Weller’s shiny ‘On Sunset’ a carnival of sounds

Liverpool gets guard of honor from dethroned champ Man City

21 Savage aiming to help kids with financial literacy during quarantine

Duckworth vows to block over 1,000 military confirmations until Pentagon proves Vindman will be promoted

Native tribal leaders are calling for the removal of Mount Rushmore

Mount Rushmore hasn't had fireworks for more than a decade because it's very dangerous. Here's why

Stream It Or Skip It: ‘The F**k It List’ on Netflix, a Tone Deaf Blend of Teen Comedy and Coming-of-Age Drama

No one cares that this Houston street sign is wrong. Except for me

Elevate Your Summer Cocktails With These Drink Mixers

Watch: McConnell says Democrats are 'threatening' institutions, declaring 'war on the rulebook itself'

The coronavirus has changed since it left Wuhan. Is it more infectious?

Customers not ready to return to restaurants, despite reopening: study

Black woman followed, confronted by white man in her own neighborhood; police investigating

'Ghostbusters' star Ernie Hudson talks about his role being cut, whether race played a factor

Tesla Shines During the Pandemic as Other Automakers Struggle

Child care is essential to reopening the economy

The Memo: Trump grows weak as clock ticks down

Trump's approach to the presidency: Ignore the challenges and embrace the easy

What to know about Independence Day celebrations at Mount Rushmore, in Washington, DC

These travel-size beauty kits at Ulta are all under $20

81 People Killed During Protests Over Murder Of Ethiopian Musician

Over 80 killed in Ethiopia unrest after singer shot dead

$1 billion shortfall, furloughs could bring US immigration system to a halt

Amanda Kloots has been told four times that Nick Cordero won't survive: 'But he has'