Weather: Damp early, then mostly cloudy, with a high in the upper 50s.

Alternate-side parking: In effect until Sunday (All Saints Day). 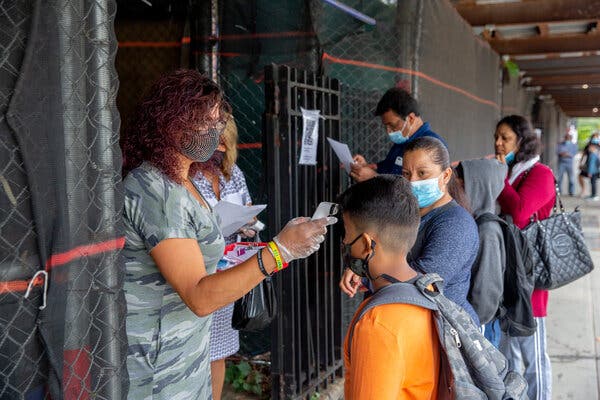 For many families across New York City, deciding whether to send their children back to classrooms involved weighing a range of considerations, such as safety measures in schools, the quality of remote learning and whether a few days of in-person instruction was worth it.

In the end, about 500,000 public school students in the city elected to start the school year fully online. Still, with more than 1.1 million children total in the system, the anticipated return of roughly half of them to school buildings was a hopeful sign of the city’s recovery.

But on Monday, Mayor Bill de Blasio announced that the actual number of students who have shown up for in-person instruction has been far lower than expected: Only about 283,000 children have gone to physical classrooms.

[Read more about the turnout in city schools.]

Here are some takeaways from the mayor’s announcement:

The mayor pushed to reopen schools, but families had concerns.

During his bid to bring children back into classrooms, Mr. de Blasio faced resistance from some educators and politicians, forcing him to twice delay reopening school buildings. Still, he remained determined to reopen, which he said would support the city’s overwhelmingly Black, Latino and low-income student body.

“I have heard the voices of thousands and thousands of parents over the years,” the mayor said in an interview with The Times before schools had reopened.

“They need this,” he said of in-person instruction, “and it’s our obligation to give it to them.”

By Oct. 1, New York City had completed the reopening of all its public schools, with about half a million children expected to be welcomed back. But early polling showed that Black and Latino families were among those who were most wary of sending their children back to classrooms, and parents have expressed a number of reasons for starting the school year fully remote.

If the trend continues, it could undercut the city’s plan.

Some parents said they wanted to see how the first few weeks in classrooms went before making a final decision. Those whose children started the year remote-only have from next Monday until Nov. 15 to opt in to classroom learning for the school year, and their children would resume in-person classes on Nov. 30.

The mayor said he believes many more students will opt in, which some educators also expect. During his Monday news conference, Mr. de Blasio said the low in-person turnout needs to be “understood as a work in progress,” while emphasizing that “a lot more kids could be attending in person.”

But if that does not happen, it would both severely undercut his ambitious push to reopen and “raise lots of questions about whether it’s worth it to continue with this model,” my colleague Eliza Shapiro, who covers education, told me.

Three weeks into the in-person school year, data from the city’s first effort at targeted coronavirus testing at schools showed a small number of positive cases, easing fears that schools would become vectors of infection.

The mayor’s announcement that only about 26 percent of students have attended in-person classes, however, added new context to those results. “We need more information, more tests from more kids, to have a clearer sense of what transmission is like,” Ms. Shapiro said.

Still, emerging evidence suggests that schools across the country do not seem to be stoking community transmission of the virus.

A 5-year-old boy died and his mother was in critical condition after an apartment fire in the Bronx. [Daily News]

When Abigail DeVille began site research for a new public art project in Madison Square Park, she stumbled on an 1876 photograph of the Statue of Liberty’s detached hand and flaming torch. For six years, the fragment had been on view in the park to raise funds for the pedestal to hold the colossal statue, which was coming to New York from France.

“History had already done it for me,” said Ms. DeVille, who knew instantly that the giant torch was the perfect form to convey the struggle for liberty in America, past and present.

“Light of Freedom,” the 39-year-old Bronx artist’s first solo exhibition in her hometown, opens today in the park, just north of East 23rd Street in Manhattan. There a 13-foot-tall, rusted lattice structure evokes the silhouette of Lady Liberty’s torch. Inside the handle is a weathered schoolhouse bell, a visual “call to action,” according to Ms. DeVille.

Brooke Kamin Rapaport, the deputy director and chief curator at the Madison Square Park Conservancy, said she approached Ms. DeVille about a piece that could address both the political moment and nationwide protests after the killing of George Floyd.

The piece summons “a long line of freedom fighters who have been protesting to exist in this nation from the very beginning,” Ms. DeVille said. At Madison Square Park, the torch stands within scaffolding, which she sees as a metaphor for the continual labor involved in the building of freedom and also as a ladder symbolizing how different groups have ascended, at times on the backs of others.

“It’s a response to what happened this summer and what’s continuing to happen in terms of the calls for this racial reckoning,” Ms. DeVille said. “It’s a monument to all of those things, and there is joy in that.”

The night was warm and sluggish. We had just watched the Yankees lose. My boyfriend and I had left the stadium, and we were switching trains at Rockefeller Center.

There was a teenager wearing a backpack on the platform. He had been in the train car on the way downtown, too, and we had noticed him wiping away tears with the back of his fist.

He seemed better now, and we didn’t want to intrude. Then he approached us.

Hard to say. It was a weekend night.

“Hey, Joey! Joey, get on!” he yelled to the teenager. The boy looked up, and shuffled onto the train. The operator turned back to us.

The bell sounded, and we stood clear of the closing doors.

Koeman on the words of the acting President of Barca about the sale of Messi: only Leo himself can make a decision about his future
Ney warmly recalls Maradona: at the age of 14, he brought the legend to an exhibition match, Diego himself offered to take a photo
Klopp responded to Neville's criticism about the words about 5 substitutions and the calendar: I'm not like him. I'm talking about all the players
The hardest task: help choose the best attacking midfielder in history
Mourinho, Lampard, Solskjaer and Moyes claim the title of best coach of November in the Premier League
Brunu, Grealish, Chilwell, Heibjerg - among the contenders for the November best player award in the Premier League
Klopp-best coach of 2020, flick-2nd, Guardiola-3rd (ESPN)
Source https://www.nytimes.com/2020/10/27/nyregion/nyc-schools-attendance.html

Driver speaks out after plane crashes into her SUV

In southern Madagascar, ‘nothing to feed our children’

You can do this total-body workout anywhere -- no equipment needed