Review: Michael Tedja's charmer of a show gets a second life at Chimento Contemporary

Or maybe it’s the other way around. Highly regulated organization provides the platform for free-spirited impulsiveness to erupt.

Either way, the work’s high-flying tension between order and chaos is invigorating.

Born in 1971 in the Netherlands, where he is based in Amsterdam, Tedja is having his second U.S. solo exhibition and his Los Angeles debut. The show’s run was abbreviated when Chimento Contemporary shuttered in mid-March because of the COVID-19 pandemic, with 210 of Tedja’s paintings on paper push-pinned to gallery walls.

Happily, they are still there. And they will be until the end of the month as the gallery slowly reopens with health precautions in place. 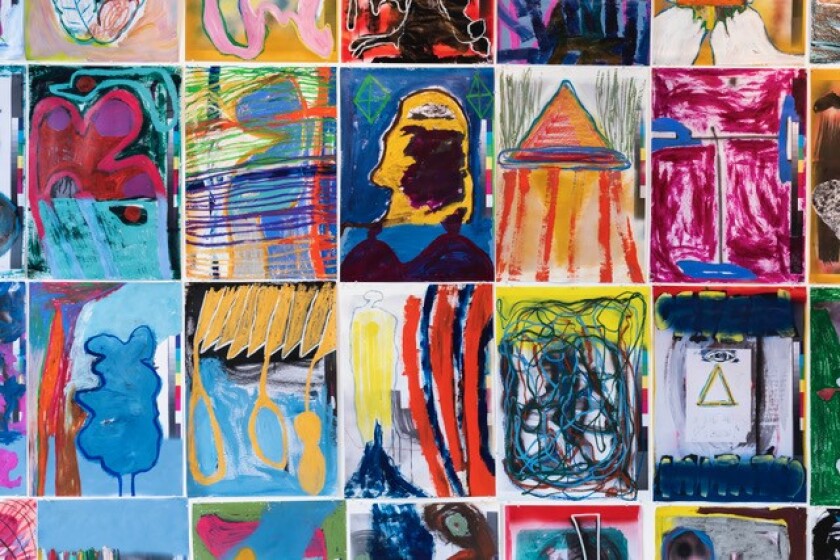 Textured paint, crayon and chalk are deployed on uniform sheets of paper lined in a grid formation that wallpapers the room. Imagery ranges from figurative to abstract, although most are better described with the upfront modifier “semi.” Tedja’s semi-abstract and semi-figurative approach seems determined not to let his pictures get pinned down.

Nearby, another tangle coalesces into a graphic describing random charges of electrical brainwaves, or perhaps a Jean-Michel Basquiat skull. Masonic mysteries emerge from an eyeball floating above an ancient pyramid, enigmatic yellow handwriting obscured by clouds of sprayed blue paint, while cartoonish thought bubbles convert two brushy, vertical white shapes into a pair of ghosts deep in spectral conversation. 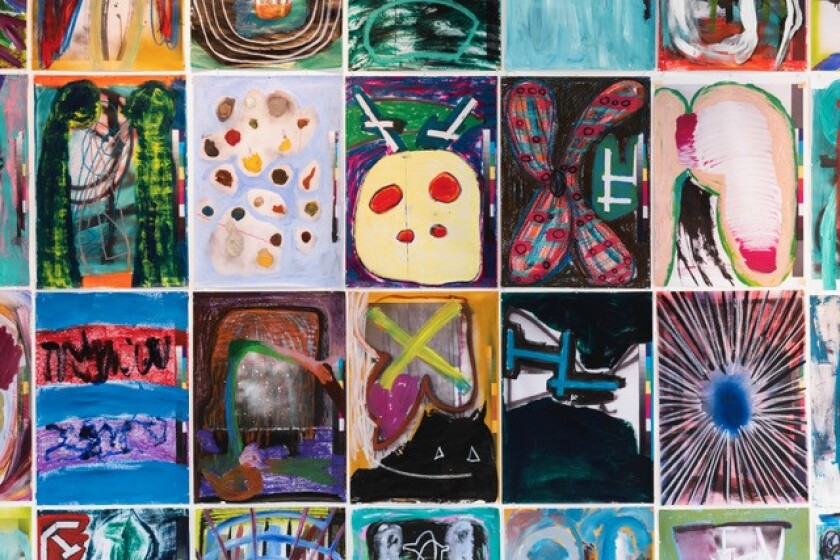 Tedja’s drawings are semi-abstract and semi-figurative.

Tedja is a kind of neo-CoBrA artist. His flamboyant storms of imagery and vividly colored marks recall the group of Danish (Copenhagen), Belgian (Brussels) and Dutch (Amsterdam) artists who briefly banded together after World War II. Their aim was to banish conventional thinking, which encompassed everything from bourgeois rituals of daily life to intellectual theorizing around avant-garde art.

McDonald’s golden arches, exuberant dancers in Russian folk tales, the refined spiritual abstractions of painter Alexei Jawlensky, gymnasts’ flips, E.T. the Extra-Terrestrial — convention in Tejda’s art is the equivalent of channel flipping on television or Internet surfing in the still-young digital world. His drawing surface is commercial card stock — the works are titled “The Color Guide Series” — and the color bars printed along the paper’s edge are left exposed. Tedja identifies a mass-produced contemporary standard against which he presses the decidedly unique, even aberrational, mark-making.

Each sheet is the same 25 inches high by 18 inches wide. The physical uniformity of the paper establishes a spatial equivalence that matches the conceptual framework, where every image is on an equal footing.

The environment erupts into a boisterous visual cacophony, playfully mad.

Two hundred and ten different stories are being told at once, each without end. Why a viewer might gravitate to this Tedja drawing over that Tedja drawing becomes an unexpectedly delightful puzzle. 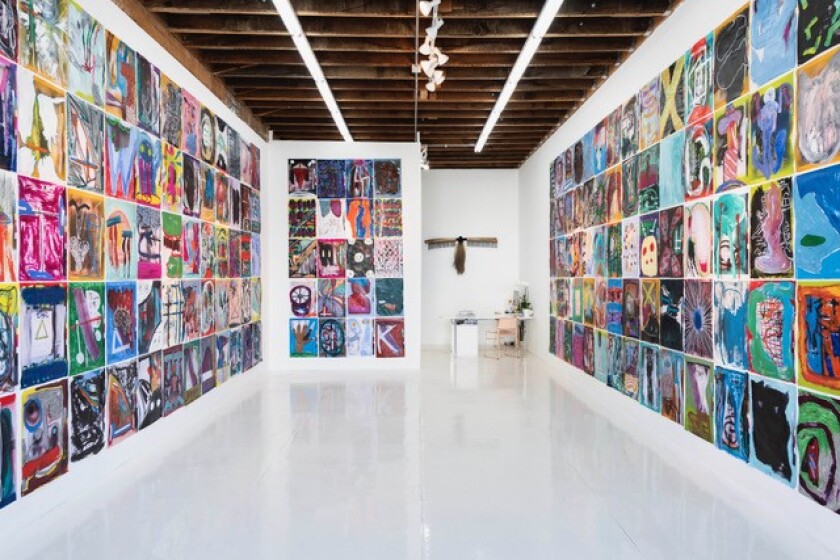 Michael Tedja has wallpapered the gallery

Bruno was named player of the month in the Premier League for the second time in a row
Giovanni van Bronckhorst: I can't imagine Barcelona without Messi
Zlatan on the future in Milan: Ibra is not a player for the Europa League
Fiorentina wants to get Higuain as part of Chiesa's exchange to Juventus
Direct shots from a corner are a deliberate technique of the team from Portugal. Scored the winning goal in the 91st and moved closer to the Europa League
Brescia reported that Balotelli weighs 100 kg. He gained 8 kg of extra weight
60 years ago, the USSR team was the first to win the Euro
Source https://www.latimes.com/entertainment-arts/story/2020-06-18/michael-tedja-chimento-contemporary

This Arizona ICU nurse protested for lockdowns. Now she is stretched thin as public rejects precautions

Trina McGee confronts the racism she experienced on the set of 'Boy Meets World': 'I didn't say it 20 years ago, but I'm saying it now'

SCOTUS Refuses to Sanction the Robbery of Tribal Lands

AR Rahman on Dil Bechara music: This whole album is carefully curated because the film has so much heart

Health expert says 250,000 Americans could die of COVID by end of year

Op-Ed: Why is UC San Francisco threatening to destroy a monument to California's Black history?

Asset storage rock vaults inside Alps to start at $500,000: report

Bhumi Pednekar: Quarantine led me to realise I prefer isolation

I teach public school. I love my students. I don't want to die

The problem with "the letter"

Covid-19 symptoms: What we know now and what to do

Analyst: Hogan administration has not been transparent on virus relief fund spending

From Nia Sharma to Rashami Desai: Massive net worth of Naagin 4 cast will leave you stunned

Deroy Murdock: To be reelected, Trump must focus on broadening his base — not petty fights on Twitter

After historic responses to COVID-19 and civil unrest, Illinois National Guard winds down its deployment

Column: Chicago could be homicide-free if it follows Trump’s coronavirus logic — stop counting and it goes away!

Dear Care and Feeding: My Neighbors Keep Sending Their Grandkid Over to Use Our Pool Uninvited

The Politics of the Roberts Court Are Clear

Is “Covid Flight” a Thing?

Beauty Gadgets That Are Worth the Investment

Are Your Indoor Plants in Need of a Healthy Boost? Try These Food Spikes, Now on Sale.

The Fate of Trump’s Financial Records

The Path to Trump’s Tax Records

Think You’re Smarter Than a Slate Production Assistant? Find Out With This Week’s News Quiz.

China vows retaliation against US sanctions over Xinjiang

WHO Experts in China to Begin Investigation of Coronavirus Origins

What happens when cruise ships retire

Depp due to wrap up evidence at libel trial against tabloid

What is airborne transmission? WHO adds guidance on 'aerosols' in coronavirus spread

California, After Riding a Boom, Reckons With Hard Times

An Unexpected Struggle for Trump: Defining an Elusive Biden

What Happens When You’re Disabled but Nobody Can Tell

7 steps you can take now to lower your internet bill

Trump camp eyes course correction for rallies: 'We can't have a repeat of Tulsa'

Don’t the Markets Know We’re Living in a Disaster Movie?

Trump Threatens to Turn Pandemic Schooling Into a Culture War

Why Is a Tech Executive Installing Security Cameras Around San Francisco?

Gina Prince-Bythewood Made a Summer Blockbuster. It’s About Time.

These ‘Bible Belt’ Voters Rejected a Fundamentalist. In the Bronx.

Homeland Security Turns to Defending Statues Amid Questions Over Priorities

I’m 10 Minutes Away From Becoming a U.S. Citizen

To Feed Me Is to Know Me