I was, frankly, too old to pay much attention to “Saved by the Bell,” a mulitcamera teen sitcom that ran Saturday mornings on NBC from 1989 to 1993, spawned the prime-time sequels “Saved by the Bell: The College Years” and “Saved By the Bell: The New Class” (along with two TV movies and various stunt reunions) and was the primordial soup from which crawled “Hannah Montana,” “That’s So Raven,” “iCarly” and other similar creations — to which I did pay attention, being by then a professional thinker about television.

But it obviously exerted the same magnetic pull on its target audience that “The Brady Bunch” did for an earlier generation, settling in deep within its collective cerebral cortex. And as that series begat the big-screen deconstruction that was “The Brady Bunch Movie,” so has “Saved by the Bell” come back to life again — but in a postmodernist, self-aware form — as a series from Peacock, premiering Wednesday. “When I was a kid,” recalls the now-grown Zack Morris (Mark-Paul Gosselaar), “I did a PSA with the president of NBC that solved drugs.” And indeed he did.

Unlike Netflix’s “Full House” sequel, “Fuller House,” which continued in the spirit of the original, “Saved by the Bell” is both a revival and a reboot, aimed at the now-grown kids who watched it back when — just about the age of Tracey Wigfield, 37, the “30 Rock” and “Mindy Project” vet who developed the new series. (Though, generally speaking, it is still safe for children. The language is mild, no one is having sex and the only drug joke is about caffeine pills.) The happy upshot of this is that, although there are plenty of references laid on for the fans, including that caffeine joke — I have done my research — you needn’t have watched the old shows to understand or enjoy the new one. Indeed, I have only good things to say about it. At once ironic and sincere, mocking and affectionate (as one might be, looking back on one’s own youth), it starts out well and just gets better.

We are back at Bayside High, where original characters A.C. Slater (Mario Lopez), the affable athlete, and Jessie Spano (Elizabeth Berkley), smart and political, are now on staff, as the school coach and guidance counselor respectively. (The great John Michael Higgins, new to the mix, plays the principal, who is kindly and cowardly.) Old classmate Zack, a hormonal prankster who I believe was to be regarded as cool — though he inspired a Funny or Die series, “Zack Morris Is Trash,” that argued convincingly otherwise — has accidentally become the governor of California “as part of a scheme to get out of a $75 parking ticket.” Voted “second hottest governor in America after Michigan’s Gretchen Whitmer,” he’s still married to erstwhile head cheerleader, the former Kelly Kapowski (Tiffani Thiessen). Their son, Mac (Mitchell Hoog), carrying on his father’s hair and pranks, now attends Bayside — as does Jessie’s son, Jamie (Belmont Cameli), a dim but sensitive jock who partially occupies the old Slater role and whose pep talk to the football team he captains goes, “Winning does not matter; what matters is having fun, spending time together, getting some exercise. And let’s not forget that the players on that other team have inner lives that are just as rich and complicated as our own.” Obviously, they lose a lot. 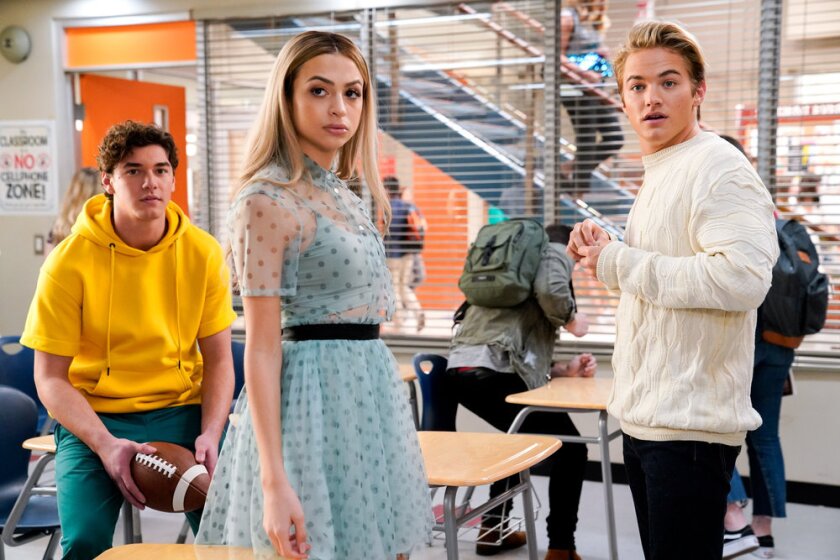 Belmont Cameli, left, as Jamie Spano, Josie Totah as Lexi and Mitchell Hoog as Mac Morris in the Peacock revival of “Saved by the Bell.”

As is typical in prime-time high-school shows, the students are sophomores when we meet them and, unlike the original cast, played by actors who have been out of high school a few years. A joke in which seniors are played by really old people — “There is no way that guy goes to our school, he is literally wearing cataract glasses and a Desert Storm hat” — is purest “30 Rock.”

As governor, Zack has cut $10 billion from the budget, closing schools as a consequence. Shamed at a news conference, he promises to send kids from the closed, poor schools to posher schools, including his alma mater. And so students from inner city Douglas High, where the library was “a Bible and bunch of Army pamphlets” and the guidance counselor a Magic 8 Ball, are bused to Bayside. There’s Daisy (Haskiri Velazquez), who is serious, motivated and an echo of Jessie, who tells her her, “I was you in high school — ambitious, stressed, I hadn’t figured my hair out yet”; Aisha (Alycia Pascual-Peña), competitive as well but at sports (she is also partially Slater); and Devante (Dexter Darden), who is taciturn and mysterious and has no counterpart in the earlier series. (Darden plays his character almost completely straight; you could strip out everything else and fill in a drama around him.)

At Bayside they will be thrown together with Mac and Jamie and Lexi (Josie Totah), the campus queen and part-time mean girl. Totah is a transgender woman — as J.J. Totah, she played a lot of male parts — as is Lexi. “Have you seen my reality show, ‘Becoming Lexi: I Am Me’?” she asks Devante. (“It’s about Lexi’s life being transgender,” Mac explains, “her journey of self-discovery and the hot friends who support her.”) The subject is otherwise left alone, except to make some points about fear and acceptance when the story needs them. Well before the season’s end, they will have become a gang.

Lark Voorhies, as Lisa Turtle, the original show’s one regular Black character as well as its designated rich girl, will make a cameo appearance — “I’ve got to go, my lovers are waking up” is one of her lines. Screech, the old series’ not-hot nerd, played by Dustin Diamond, is mentioned but absent. 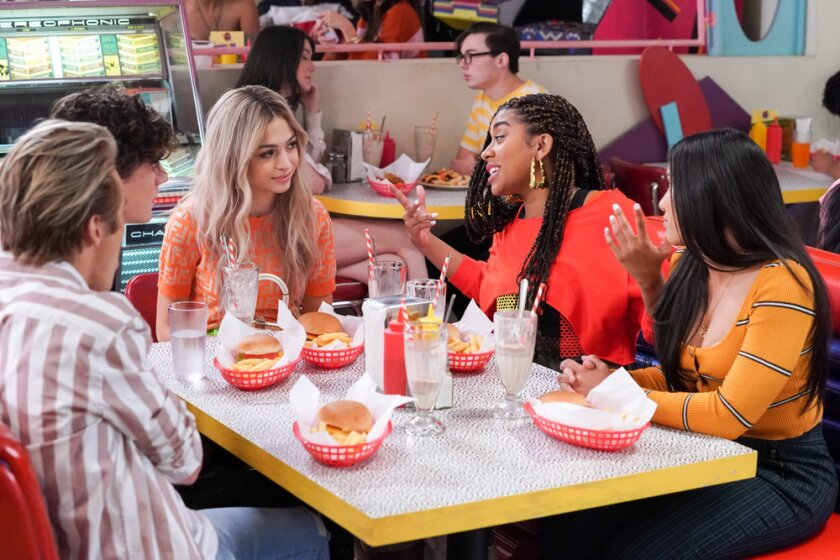 Mitchell Hoog as Mac Morris, from left, Belmont Cameli as Jamie Spano, Josie Totah as Lexi, Alycia Pascual-Pena as Aisha, and Haskiri Velazquez as Daisy in Peacock’s “Saved by the Bell.”

To some extent, the series is a clash of realities. The Douglas High kids, Black and brown, are traveling not only to somewhere white and wealthy but from someplace more or less real to somewhere quite improbable. The plots recall the original — the school play, a student body election, a big dance, a party out of bounds — but with absurdist (rather than merely absurd) twists. (Surviving intact, as if preserved in amber, is the Max, a snack shop of late New Wave design where, Daisy is told, “we like to hang out after school — also before and during.”) There are schemes and pranks, romantic alignments, misalignments and realignments. There are messages, of a sort, and they are essentially those of the original: Be true to yourself, be true to your friends, be true to your school, be good and if you can’t be good be careful and, the new series would add, if you can’t be careful be rich. “Having money can make you act like a jerk,” Mac tells Daisy, “but fortunately you can just use more money to clean up the mess you made. It’s the circle of wealth …. You look conflicted. Let me give you some money.”

The returning cast fits the new mood ably. The younger players are first-rate — even better than one might notice at first, given the general air of nuttiness. But they play different levels with great skill, resolving the character and the joke about the character in people you can authentically care about, at least a little, even as the metafictions remain legible. It’s like Brechtian distance — we laugh not at the stupid character but the idea of A Stupid Character — if Brecht were an old softy who wanted to fill you with feelings.

In a later episode, Mac wonders why he feels bad for his friends when nothing bad is happening to him. “It’s called empathy, Mac,” Lexi replies. “I have it now too.”

‘Saved by the Bell’

When: Any time, starting Wednesday

Bruno picked up 4 Player of the Month awards in 2020. Ronaldo, Henry and Lampard had the same number-but for a career in the Premier League
Lev - the best coach of the decade in the national teams, Deschamps-2nd, Shevchenko-17th (IFFHS)
Head of the Premier League: We ask players not to hug and change their behavior
Milan had rented the midfielder, Torino Meite until end of season with option to buy
Ramos played on painkillers with Athletic due to knee problems
Barcelona's presidential election is scheduled to take place on March 7
Sir Alex Ferguson: Fortunately, I was retired when I watched Liverpool play in the last two years
Source https://www.latimes.com/entertainment-arts/tv/story/2020-11-25/saved-by-the-bell-revival-peacock

Jill Zarin has built a face-mask empire during the pandemic

Europe’s coronavirus curfews and lockdowns at a glance

Amazon Workers in Alabama to Vote on Union

Kayleigh McEnany packs up, leaves West Wing but will continue as press secretary until Wednesday

Migrant caravan in Honduras on the move in uncertain times

'It was the only ending for me': The finale of 'Promising Young Woman' explained

Megabus suspends travel to DC ahead of Inauguration Day

Angels avoid arbitration with Bundy, 4 others

L.A. firefighters might be required to get COVID-19 vaccine, Garcetti warns

6 conspiracy theories about the 2020 election – debunked

Tyler Perry to be honored with humanitarian award at 2021 Oscars

States adding Covid-19 vaccination sites, but governors complain the feds need to give them more doses

How a little-known incident in 1956 unnerved MLK

Top Lawmakers Not Told of Police Request for Backup Before Riot, Aide and Others Say

‘The Last Of Us’: ‘Beanpole’ Helmer To Direct Pilot Of HBO’s Video Game Series Adaptation

Auction bids are topping $57,000 for a rare $20 banknote with Del Monte sticker on it

Biden Pressed on Whether He ‘Feels Safe’ About His Inauguration

Over Two Million Around the World Have Died From the Virus

States put smokers in line for the Covid-19 vaccine, sparking frustration among those lower in priority

States speed up Covid-19 vaccinations, but governors complain the feds need to give them more doses