The second stage of a Rocket Lab Electron rocket carrying seven small satellites malfunctioned after launch from New Zealand on Saturday, suddenly slowing down and losing altitude. The company confirmed the vehicle and its payloads were lost, but no indication of what went wrong was immediately available.

"We lost the flight late into the mission," company CEO Peter Beck tweeted. "I am incredibly sorry that we failed to deliver our customers satellites today. Rest assured we will find the issue, correct it and be back on the pad soon."

We lost the flight late into the mission. I am incredibly sorry that we failed to deliver our customers satellites today. Rest assured we will find the issue, correct it and be back on the pad soon.

Rocket Lab's innovative Electron launcher, featuring 3D-printed engines and battery-powered fuel pumps, is designed to launch small satellites into low-Earth orbit at a relatively low cost, providing access to space for payloads that otherwise might have to wait for more expensive rides aboard larger boosters.

The Electron blasted off from Rocket Lab's picturesque launch site on the rocky coast of the Mahia Peninsula at 5:19 p.m. EDT. The nine Rutherford engines powering the first stage performed normally, boosting the rocket out of the lower atmosphere. The second stage, featuring a single vacuum-optimized engine, then took over. 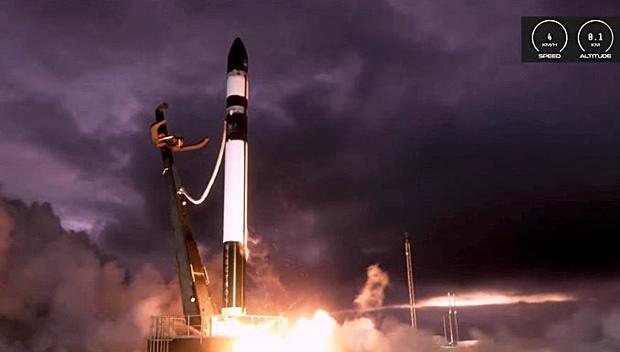 But about five minutes and 41 seconds after takeoff, telemetry provided by Rocket Lab, displayed along with company-provided video from cameras on the rocket, showed the stage's velocity peaking at around 8,509 mph, at an altitude of about 119 miles, and then starting to drop.

The altitude continued to increase for another 26 seconds or so, reaching 121 miles, before it, too, began decreasing. Rocket Lab ended its launch webcast a few minutes later without any comment on the telemetry or outcome of the mission. But Beck confirmed loss of mission a few minutes after that.

Rocket Lab, founded in New Zealand and now headquartered in Long Beach, California, launched its first Electron in 2017. The flight was terminated after a loss of telemetry, but the booster was operating normally at the time. Saturday's loss was the company's second Electron failure in 13 flights.

Spaceflight, a company that brokers rideshare missions, including Canon's launch Saturday, said in a statement "we are of course disappointed, while at the same time are always aware that launch failures are part of the business of space."

"We will work closely with Rocket Lab and our customer Canon Electronics who had their CE-SAT-IB imaging satellite onboard this mission to figure out the next steps, but we are undeterred in our resolve to get our customers to space. Our hearts go out to all the teams who worked so hard on this mission."

A statement from Planet expressed support for Rocket Lab.

"While it's never the outcome that we hope for, the risk of launch failure is one Planet is always prepared for," the company said on its website. "We already have 26 SuperDoves ... slated for launch on (an Arianespace) Vega rocket later this summer, and several other launches over the next 12 months are on the manifest."

"We have full faith that Rocket Lab will be able to bounce back from today's failure in no time, and we look forward to flying on the Electron again," Planet added.

Finally, In-Space tweeted its team was "absolutely gutted by this news. Two years of hard work from an incredibly committed group of brilliant engineers up in smoke. It really was a very cool little spacecraft."

The In-Space team is absolutely gutted by this news. Two years of hard work from an incredibly committed group of brilliant engineers up in smoke. It really was a very cool little spacecraft. https://t.co/llyZVdubCN

Messi bought a penthouse in Milan. It was reported that Inter is Interested in the player
Real advance refund the Youngster of rental Sociedade. Zidane is impressed with his performance
Barys 20 days before the start of the KHL: they do not know where to play, Legionnaires are cut off from the team
Areolaa returned to PSG after a loan spell at Real Madrid
Manchester United can lease Ousmane Dembele for a year with a buyout obligation
The rum is bought by a billionaire from the United States, who was filmed at Nolan in Dunkirk. His son fell in love with Rome while working with Ridley Scott
Hargreaves on Borussia's refusal to let Sancho go: this is a bluff. They are just trying to get more money out of Manchester United
Source https://www.cbsnews.com/news/rocket-lab-loses-electron-booster-five-small-satellites-in-launch-failure-2020-07-04/

Bindi Irwin Is Pregnant! ‘Baby Wildlife Warrior Due 2021,’ But That Doesn’t Mean The Tabloids Were Correct

What's The Risk Of Riding The School Bus?

AT&T CFO John Stephens: WarnerMedia Layoffs Were “Not Because We Needed To Adjust Anything” After HBO Max Bow

More than a million without power in Midwest from severe storms

Perseid meteor shower 2020: When, where and how to see it

Trump said he was ‘reluctant’ to trust US intelligence due to Comey, Brennan

‘Below Deck Med’s Malia White Rips Hannah Ferrier for Having Drugs Onboard: “It’s Not Legal to Take Valium on a Yacht”

Previous vaccines and masks may hold down Covid-19, some researchers say

Vaccine history and masks may shut out Covid-19 symptoms

Another Portland protest broken up after activist’s arrest

What Time Does ‘Hard Knocks’ Premiere on HBO?

Defund the LAPD? At this pace, it would take 20 years to hit Black Lives Matter's goal

For Regina King, her 'Watchmen' role is inspired by 'every Black woman that ever was'

Amid COVID-19 pandemic, people with diabetes struggle to get insulin

Column: Customer service doesn't have to be this awful

Biden campaign puts VP team in place ahead of announcement

This week in TikTok: So … is it getting banned or what?

Nigeria singer sentenced to death in north for blasphemy

These are the best roadside attractions in each state

Dr. Fauci Pressed on Trump’s Claim COVID-19 Is ‘Disappearing’: ‘Look at the Data’

L.A. deputies point guns at 3 Black teens who say they were attacked

What do the kids say? K-12 students sound off on school

Lebanon’s leaders were warned in July about explosives at port, documents show

Amitabh Bachchan documents all that he did in a day

Lawmakers up the ante in push for sustained cash payments amid coronavirus: ‘Magic money tree’

CNN's Brian Stelter claims there are no anti-Trump news outlets, but his network's coverage suggests otherwise

The Scary Costs of Fight-or-Flight Investing