Schultz 2020? Other C.E.O.s Will Be Watching Closely

Since Donald Trump was unexpectedly elected president on Nov. 7, 2016, speculation has swirled about whether another well-known business leader might make a bid for the White House in 2020.

Could that person be Howard Schultz?

Mr. Schultz, the chairman and former chief executive of Starbucks, said on Monday that he was stepping down from the company’s board. Though he did not announce a presidential bid, he acknowledged that he was considering entering politics.

“I intend to think about a range of options, and that could include public service,” he said. “But I’m a long way from making any decisions about the future.”

Although no chief executive has thus far undertaken a formal bid for the White House, and Mr. Trump’s victory may well prove an historical anomaly, many have been pegged as potential candidates, including Oprah Winfrey; Bob Iger, the chief executive of Disney; and Mark Cuban, the owner of the Dallas Mavericks.

Yet for executives who harbor presidential ambitions, there are few role models.

“The history of business leaders in the White House has not been good,” said Prof. Douglas Brinkley, a presidential historian at Rice University and a CNN contributor. “You basically have Herbert Hoover and Donald Trump.”

Mr. Hoover, a mining executive who later served as commerce secretary under Warren Harding and Calvin Coolidge, presided over the start of the Great Depression. And Mr. Trump is among the most divisive presidents in American history. 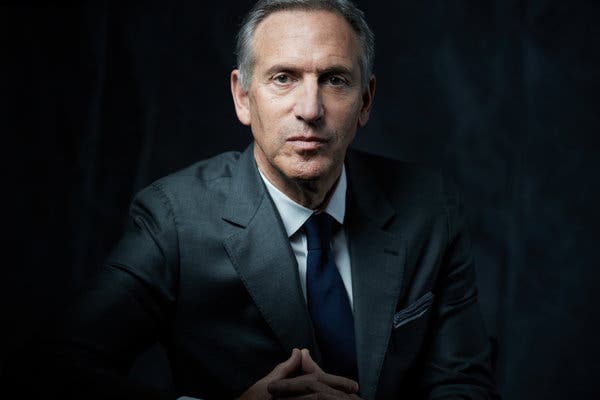 Howard Schultz, the chairman of Starbucks, announced on Monday that he was stepping down at the end of the month. The announcement raised speculation that he might make a run for the presidency in 2020.CreditMike Cohen for The New York Times

“Because we had the Great Depression on Hoover’s watch, the feeling was that a businessperson in the White House was a disaster,” said Mr. Brinkley, who has written books about Franklin Delano Roosevelt, John F. Kennedy, Ronald Reagan and others. “And Trump was really a midlevel, self-employed C.E.O., not a real businessperson with a board of directors he was beholden to.”

The election of Mr. Trump, a real estate developer and reality television personality, certainly opened that door of opportunity, making it clear that American voters were willing to elect a president with no prior government experience. (The last businessman without government experience to make a serious run at the presidency, Ross Perot, finished third in a three-man race in 1992 with 19 percent of the vote.)

And at a moment when many voters say they are frustrated with partisan gridlock and ineffective government programs, some believe that an efficiency-minded business executive might bring some discipline and pragmatism to the Oval Office.

“There’s this notion that government is less effective than it should be, and that the cure could be a modern American business leader,” said Aaron Chatterji, a professor at the Duke University Fuqua School of Business. “There’s room for a natural outsider who is seen as making decisions based on benefits and costs, and less on ideology. That’s the theory at least.”

Mark Cuban, owner of the Dallas Mavericks and a co-host of “Shark Tank,” has said he was thinking about a presidential run in 2020.CreditMike Cohen for The New York Times

Mr. Schultz’s political aspirations are regarded with some skepticism among national Democrats, and it is unclear whether there is any popular constituency in the party for a wealthy white businessman who lacks government experience. But Mr. Schultz has repeatedly expressed interest in the presidency to his associates, and of the numerous political outsiders flirting with a 2020 campaign, he is seen as being among the more serious in his ambitions.

Mr. Schultz bought Starbucks in 1987 and turned it into one of the most successful restaurant chains in the world. Over the years, he has spoken out on issues including gun violence, gay marriage and race relations, often using Starbucks to make political points. Last week, the company shut down most of its locations to conduct anti-bias training after the arrest of two black men at one of its stores in Philadelphia.

Mr. Schultz has also built something of a political network while leading Starbucks, working closely with the public-relations firm Edelman — where John McCain’s former campaign manager, Steve Schmidt, is a top executive — and the Democratic consulting group SKDKnickerbocker, which is stocked with former advisers to politicians like Hillary Clinton and Michael R. Bloomberg. A donor to Democrats, Mr. Schultz has also shown interest in centrist political organizing and hosted a town hall for the nonpartisan group No Labels in 2011.

And Mr. Schultz, 64, has another thing going for him: money. He is worth an estimated $2.8 billion, according to Forbes.

Mr. Schultz is not alone in having deep pockets, of course. Mr. Cuban, the billionaire owner of the Dallas Mavericks basketball team and a co-host of “Shark Tank,” is another outspoken critic of President Trump who has flirted with a presidential run.

Bob Iger, chairman and chief executive officer of the Walt Disney Co., recently dampened speculation that he might run for president in 2020.CreditPatrick T. Fallon/Bloomberg

When asked on Monday if he had given any more thought to a presidential bid, Mr. Cuban emailed, “Yes. But not willing to discuss at this point.”

And Ms. Winfrey, who is worth an estimated $2.9 billion, created a stir in January after she delivered a stirring speech at the Golden Globes that sounded to many like a presidential trial balloon.

Since then, Ms. Winfrey’s camp has offered mixed signals about her intentions. A representative for Ms. Winfrey declined to comment on Monday.

Other big-name executives have effectively taken themselves out of the running.

Mr. Iger seemed to be seriously entertaining the notion. But Disney’s pending acquisition of a number of 21st Century Fox assets is contingent on his remaining chief executive for several more years, and he has signaled that he plans to remain at the company.

Jamie Dimon, the chief of JPMorgan Chase, has been put forward as another potential presidential candidate who could appeal to voters with a mix of pragmatism, business success and charm. But in recent months Mr. Dimon has ruled out a presidential run, according to a person familiar with his thinking.

And Mark Zuckerberg, Facebook’s chief executive, last year crisscrossed the country on a listening tour that looked much like a political campaign, but has offered no indication that he is seriously considering a run.

Oprah Winfrey at a benefit for the Robin Hood Foundation last month in New York. Ms. Winfrey’s speech at the Golden Globes in January had many wondering if she was positioning herself for a run for the White House.CreditKrista Schlueter for The New York Times

In recent years, other prominent business leaders have fallen short in their efforts to reach the White House. Mitt Romney came from a political family and served as governor of Massachusetts. Running largely on his experience as a private equity executive, he won the Republican nomination in 2012, but lost to President Barack Obama.

Carly Fiorina, the former chief executive of Hewlett-Packard, vied for the Republican nomination in the last presidential election cycle but dropped out early in the process. (She told Fox Business Network last year that she hadn’t ruled out making another bid in 2020.)

And Mr. Bloomberg, who built a successful company and was a popular mayor of New York City, deliberated for years, yet he never mounted a presidential campaign.

But in the wake of Mr. Trump’s victory, business leaders may be emboldened to mount their own campaigns.

Nancy Koehn, a historian at Harvard Business School, said that experience running a company could translate on the campaign trail and in the Oval Office, where presidents must absorb huge amounts of new information and deal with a diverse audience of colleagues, lawmakers and citizens.

“A huge part to the presidency is learning,” Ms. Koehn said. “The best C.E.O.s are great synthesizers, integrators and communicators, and most importantly they are great learners.”

Ultimately, however, it takes more than success running a public company and a billion dollars to win over American voters.

“Howard Schultz could get some traction in the Democratic Party because Starbucks is seen as a way station of liberalism,” Mr. Brinkley said. “But he’s not a particularly charismatic person.”

Hames can leave Real Madrid for the Premier League for 25 million euros. A year ago, Atletico and Napoli offered 45-50 million euros for him. Real Madrid Midfielder Hames Rodriguez is likely to change clubs at the end of the season
Gattuso on Napoli: We must develop a winning mentality
Avangard congratulated Zenit with the title: it's Time to match and take the Gagarin Cup
Coach of Orenburg Pro 0:1 with Rubin: Morally devastated, could have drawn
Kike Setien: Griezmann played a great match, understood Messi well, scored a great goal. We changed something
Barca President on the Real Madrid match: VAR always favours one team. I have an unpleasant feeling
Faty scored the 9,000 th goal in the history of Barcelona
Source https://www.nytimes.com/2018/06/04/business/ceos-president-howard-schultz-starbucks.html?partner=rss&emc=rss

Gerrit Cole’s teammates will be his first Yankees pitching test

Yoenis Cespedes’ ‘good day’ in field, at plate for Mets had one omission

Spirit, Thorns play to 1-all draw in the NWSL Challenge Cup

Italy’s problem with working women made worse by coronavirus

Rep. Steube fires back at Trump critics over July 4 address: 'They will criticize anything he does'

Nick Cordero, Broadway actor, dies at 41 after battle with Covid-19

Frederick Douglass Statue Torn Down and Vandalized in Rochester, N.Y.