Seattle mayor plans to move 911, other functions outside police department

Seattle Mayor Jenny Durkan announced plans on Monday to move certain functions away from the police department along with a proposed $76 million cut to its budget while criticizing a proposal backed by elected leaders to defund the police force by half.

Durkan's plan calls for $56 million to be slashed from the department's more than $400 million budget and be redirected toward other needs. Another $20 million could be cut next year in the form of shuttered plans to expand the police force, the Seattle Times reported.

The first step would be to move civilian functions outside the police department, such as the city's 911 call center, parking enforcement, the Office of Emergency Management and the Office of Police Accountability, Durkan said.

"We both recognize that we have a historical opportunity and obligation to reimagine how policing can be done in Seattle," she said during a news briefing. "We believe deeply in broad community investments which can build greater community help and less need to call 911 for help."

Most of Seattle's 911 calls are for noncriminal offenses like parking disturbances and public assistance.

The plan comes after a coalition of groups asked the City Council last week to defund the Seattle police department by at least 50 percent. A majority of the council endorsed the demands.

"There is simply no way safety will not be compromised if we fire 50 percent of our officers," Best said.

A 50 percent reduction in the police budget would almost certainly result in layoffs of law enforcement personnel, Durkan said and could compromise the city's ability to appropriately respond to emergency calls.

On Friday, the department tweeted that it has made an effort to hire more employees, officers and civilians that reflect the communities in which they serve. Drastic cuts would mean letting go of many of them, it said. 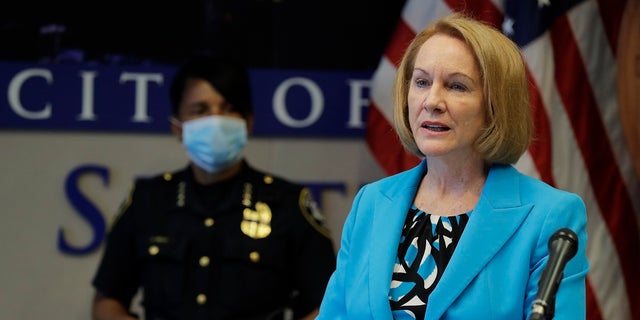 "To date, the City Council has done almost no analysis on SPD’s budget, 911 calls or staffing models needed for a 24/7 response in every part of the city. They haven’t even talked to the chief of police to get her views," Durkan said. "This is simply not responsible. You can’t govern by Twitter or bumper sticker. Community safety is too important."

Councilwoman Kshama Sawant said she her office will demand that police budget for the remainder of the year be cut in half when the budget comes up for a vote in August.

In a letter to Durkan last week, Best said such a reduction would force her to close a police precinct and the elimination of gang and domestic violence units, among others.

The proposed reforms come after weeks of protests sparked by the death of George Floyd, a Black man who died May 25 while in Minneapolis police custody, and the occupation of several city blocks by protesters that saw three killings and other violent acts until the area was cleared earlier this month.

Sergio Region: Sevilla are determined to win the Europa League. We want to win everything we can
Well, about the game with Olympiacos: We did a great job. I watched the match Sevilla-Roma, now I will review it
In the 1/4 final of the Europa League, Bayer will play Inter, Manchester United-with Copenhagen, Wolverhampton against Sevilla, Shakhtar-Basel
Pep Guardiola: Getting children back to school is more important than spectators at stadiums
Raul Jimenez has scored 37 (27+10) points in all competitions this season. Best result in the Premier League alongside de Bruyne
Sevilla has won the Europa League or the UEFA Cup after reaching the 1/4 final on the last 5 occasions
Arsenal are laying off 55 employees, although they have persuaded the players to cut their salaries so as not to fire anyone. The team was disappointed
Source https://www.foxnews.com/us/seattle-mayor-plans-to-move-911-other-functions-outside-police-department

Trump’s economic recovery could stall out entirely ahead of election

Sweden Records Largest GDP Drop Since 1980, But Outperforms Many Other EU Countries

What's on TV Friday: 'Dominic Fike, at First' on FX

The Voting Rights Act is still under siege 55 years later

In a Nuclear Arms Race, the World Can Be Destroyed in a Flash

If de Blasio can’t even lie about the crime wave right, how’s he going to end it?

A Promising Life Is Cut Short, Becoming a Symbol of Lebanon’s Heartache

Ohio professor says he’s being ‘censored’ over class about Marxism

How To Watch Lakers Vs. Rockets Live Online

Rays’ Blake Snell: ‘It feels a lot better’ when we beat the Yankees

The best fix for NY gov’t budgets: Juice the economy

Coming off victory, Kang ties for lead in Marathon Classic

Doctored videos are already faking cause of Beirut blast

Horace Clarke dies at 81: Face of losing era was ‘happy’ to be Yankee

Three teens arrested at Mar-a-Lago after fleeing from police

High Fidelity Canceled After One Season: Find Out the Fates of All Your Favorite Shows

Most of the coronavirus tests the U.S. does are worthless. But there's a solution that could actually work — and stop the spread.

Chicago tourists are so desperate for deep-dish pizza, they are forgoing mandatory quarantine: report

NYC Mayor Bill De Blasio Tells Residents Wary Of Pandemic Mass Transit: “Do Not Buy A Car. Cars Are The Past”

Michigan State football's Mel Tucker has a strategy: 'We're focusing on the truth'

The Evils of Election Incompetence

Facebook will let employees work from home until July 2021

US Firm Secures Oil Deal with US-Backed Forces in Syria

Trump falsely says Biden, a practicing Catholic, is "against God"

Doctored videos are already faking the cause of Beirut's explosion

NRA plans to spend ‘tens of millions’ in battleground states

It's almost time: Bumrah shares excitement ahead of IPL 13

Column: Tiger positions himself for a major chase at PGA

Minneapolis leaders push ahead with efforts to change police

Score up to 50% off The North Face, Patagonia and more during Backcountry's huge semi-annual sale