RICHMOND, VA -- The self-proclaimed leader of the Ku Klux Klan in Virginia was found guilty on Monday of six misdemeanor charges following a June incident where he drove a vehicle into a group of Black Lives Matter protesters.

Video footage from June 7 shows Harry H. Rogers driving onto the median to pass a group of cars behind 300 protesters. He was also caught on camera driving into at least two bicyclists and one demonstrator on foot.

Rogers purportedly boasted to authorities that he was the "highest-ranking member" of the KKK in the state and had been coordinating with 20 others to "defend" Confederate monuments in Richmond. He also told the cops to "check him out" on social media.

"Several witnesses reported that a vehicle revved their engine and drove through the protesters occupying the roadway," Henrico County Police said in a statement following the incident. 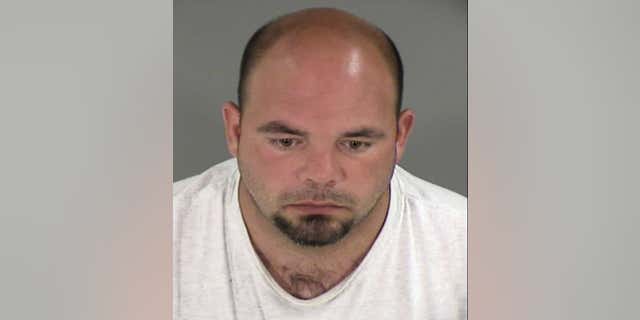 One person was injured during Rogers' attack but was not seriously wounded.

"I am charging Mr. Rogers with the strongest form of assault and hate crimes permitted under Virginia law," Taylor said. "...I will not tolerate this violence in Henrico. I have no doubt Mr. Rogers was motivated by bigotry and racism and should be severely punished for his egregious criminal behavior."

Roger was not found guilty of the hate crime charges. The judge argued that because some victims were white, Rogers did not target them because of their race, WTVR reported.

NO CHARGES TO BE FILED AGAINST CALIFORNIA MAN WHO WENT SHOPPING IN KKK HOOD: POLICE

Following the incident, police officers found KKK memorabilia including patches, literature, and a manifesto in Rogers' Chevrolet truck. He also had an AR-15 firearm and two 20-round M4 magazines in his center console. A search of his home found multiple firearms, a vest with extended magazine clips, ammunition, and a green grand dragon robe.

Rogers' attorney George Townsend argued that the cyclist who Rogers is accused of hitting stepped toward Rogers' car during the collision.

Prior to his most recent arrest, Rogers had a handful of misdemeanors and traffic infractions against him.

In 2017, he was sentenced to 15 days in jail on a concealed weapons charge that stemmed from an incident where he showed up to a fast-food restaurant dressed in full Klan costume and caused a scene. He also has a trespassing charge "under advisement," which means he violated those terms when he picked up the newest charges against him.

And on May 29, the authorities were called after Rogers entered OrthoVirginia, a medical facility, without a mask. When the receptionist told him to put on a face-covering, he went to his car and came back in a Klan hood. When shown the door by staff, he yelled "white power," according to the police report.

Valery Karpin: Maccabi is a playing, pressing team. It is very dangerous to let her do everything
Barcelona will make one last attempt to sign Lautaro
Lingard's agents are in talks with clubs from England and Europe
Boateng said he dyed his hair purple because he lost an argument to a friend
Bayer loaned defender Aryas from Atletico
Van de Beek on trophies: Manchester United will fight for everything
Koeman feels the mistrust because of the situation in Barcelona (Marca)
Source https://www.foxnews.com/us/kkk-leader-plowed-black-lives-matter-protesters-guilty?utm_source=feedburner&utm_medium=feed&utm_campaign=Feed%3A+foxnews%2Fmost-popular+%28Internal+-+Most+Popular+Content%29

Ruth Bader Ginsburg movies 'On the Basis of Sex,' 'RBG' returning to theaters for charity

No cops were charged with Breonna Taylor’s death. This is how the system was designed.

America's at a breaking point. So is YG

I Left California Because of Climate Change

Nepal to conduct census in Kalapani; won't be easy as India strongly opposes

Will the Chargers be to blame for Tyrod Taylor’s strange injury?

US parents delaying preschool and kindergarten amid pandemic

Covid-19 models have a stark warning: The pandemic is far from over

For the first time in almost a century, Democrats can win a Senate seat in Kansas—yes, Kansas

Sen. Tester says ‘holy s–t, I thought we had better technology’ at hearing

Jordan demands answers on whether FBI is investigating Hunter Biden allegations, in wake of Senate report

No. 18 BYU back on field after COVID-19 outbreak, faces Troy

“We’re gonna have to see what happens”: Trump’s comments about the peaceful transfer of power, explained

Coronavirus continues to top what Americans hear about Trump

After declining for months, U.S. coronavirus cases are rising again. Has the 'fall wave' begun?

Biden Could Be Our Second Catholic President. Does It Matter?

When Will ‘Raised By Wolves’ Episode 10 Premiere on HBO Max?

The BAFTA Awards have a diversity problem. So they're making over 120 changes

HBO Documentary Films Acquires Frank Marshall-Directed ‘The Bee Gees: How Can You Mend A Broken Heart’

“I don’t want to be a nurse, a purse, or worse”: 5 seniors on dating online

Lakers take their LeBron James frustration straight to the league

Bengals, Eagles look to avoid 0-3 start in Wentz vs Burrow

'There will be an orderly transition': McConnell dismisses Trump's refusal to commit to a peaceful transfer of power