Members of Singapore's parliament announced their decision this week to repeal a criminal law against sex between men, after years of backlash from critics who have for years viewed the colonial-era ban as discriminatory.

The statute, which was added to Singapore's penal code almost 100 years ago while under British control, threatened punishment of up to two years in prison for men who engaged in sex of any kind with other men, even if sex was consensual and took place in private. Although LGBTQ+ activists in Singapore acknowledged that the law as stated, called Section 377A, has not been enforced in decades, they still celebrated what advocacy group Pink Dot, referencing the repeal, told AFP was a "historic milestone for LGBTQ+ equality."

Law Minister K. Shanmugam said in remarks given at Parliament on Monday that, because sex between men is unrelated to "public order issues" in Singapore, engaging in it should not be criminalized. Echoing the general tenor of this week's parliamentary meetings to discuss lifting the ban, Shanmugam also said that leaving the decision up to the courts could potentially have "consequences on family policies." 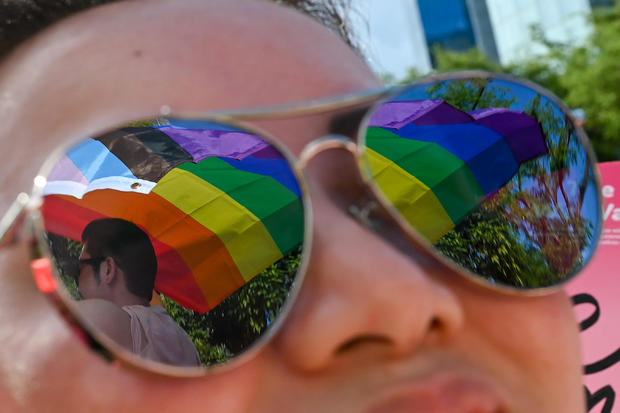 Supporters attend the annual "Pink Dot" event in a public show of support for the LGBT community at Hong Lim Park in Singapore on June 18, 2022. Getty Images

In the same string of sessions held to repeal Section 377A, members of parliament established an amendment to Singapore's constitution that upholds the definition of marriage as a heterosexual relationship and prevents courts from challenging that definition, as well as policies related to marriage, instead leaving all decisions on those matters to the executive and legislature. In effect, the amendment substantially limits the possibility of legalized marriage for LGBTQ+ people happening in Singapore.

Responding to both parliamentary decisions, Singapore Prime Minister Lee Hsien Loong said he was "happy" with the outcomes and called both constitutional changes "balanced, wise steps forward" in a Facebook post.

"The outcome itself is significant. We are decriminialising sex between men — a longstanding issue, and not just for gay Singaporeans," he wrote. "At the same time we are protecting the definition of marriage — as a union between a man and a woman — from Constitutional challenge. Taken together, these are balanced, wise steps forward."

Parliament noted on Monday that passing both bills aimed "to address the concerns of various parties who are for and against the repeal" of Singapore's previous ban.

Still, the country's LGBTQ+ community reacted with relief once Section 377A was struck down, AFP reported. Roy Tan, a doctor who had previously challenged the now-defunct law in court without success, said he felt "grateful and privileged to have witnessed the endpoint in our 12-year-long struggle to strike down," before describing the repeal as "the birth of a new chapter in the history of Singapore's LGBT community," according to AFP.

"With the law repealed, we can progressively dismantle impediments to the visibility and progress of queer citizens because there no longer remains a reason for prejudicial treatment," Tan reportedly told the outlet, while Benjamin Xue, identified as a 39-year-old gay man, said the repeal could help the community start "opening up the doors to have that frank conversation about our queer lives in Singapore." Xue called the constitutional amendment "an uneasy thing to swallow right now," according to AFP.

China says suspected spy balloon over the U.S. is for weather research and was blown off course

FanDuel Ohio Promo Code: Rush to get a $3,000 No Sweat First Bet for Hawks vs. Jazz

BetMGM Bonus Code NPBONUS gives you $1,000 in bonus bets for Suns vs. Celtics

US added a strong 517,000 jobs in January despite Fed hikes

Who’s in, who’s out and who may be on the bubble to make the Yankees’ Opening Day roster

Extreme cold snaps: Why temperatures still plummet to dangerous levels even as the planet warms

These are the cheapest dog breeds to insure

Effective Altruism Promises to Do Good Better. These Women Say It Has a Toxic Culture Of Sexual Harassment and Abuse

Elon Musk Should Not Be In Charge of the Night Sky