A supermassive black hole swallowed up a star, ripping it apart, and uniquely expelled a beam of light from its center.

Astronomers then observed a jetted stream of "afterglow" from the catastrophe, which experts call a Tidal Disruption Event (TDE), heading straight toward the Earth.

"The event started when an ill-fated star approached the supermassive black hole (SMBH) on a nearly parabolic trajectory and was ripped apart into a stream of gaseous debris," read the scientific paper, published on Nov. 30. "About half of the mass stayed bound to the black hole, underwent general-relativistic apsidal precession as the gas fell back towards the pericenter, and then produced strong shocks at the self-crossing point."

ASTRONOMERS ARE SHOCKED WHEN BLACK HOLE 'BURPS' OUT A STAR

The scientists said the jetted beam — the AT2022cmc, or an "infrared/optical/ultraviolet light curve" — was initially red in color before it decayed over four days and changed to a blue hue.

The astronomers added: "The optical and ultraviolet observations revealed a fast-fading red ‘flare’ that transitioned quickly to a slow blue ‘plateau’, enabling the study of two components generated by the tidal disruption: the relativistic jet and the thermal component from bound stellar debris accreting onto the black hole."

The blasted remains were so powerfully bright that astronomers detected the TDE from the dwarf galaxy a million light-years away.

The paper added: "Observations of a bright counterpart at other wavelengths, including X-ray, submillimetre and radio, supports the interpretation of AT2022cmc as a jetted TDE containing a synchrotron."

The TDE was discovered in Feb. 2022, before the scientific news journal received the paper about it in April 2022, and the research was finally accepted in October 2022. 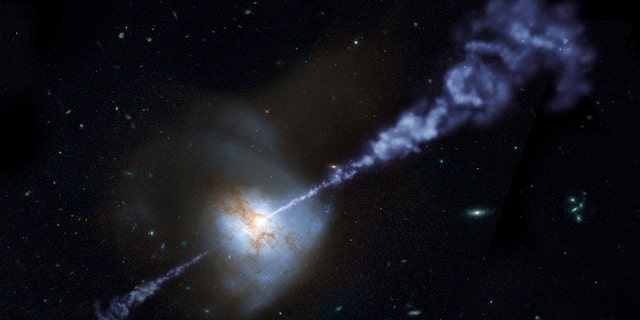 Ryan J. Foley, a co-author and UC Santa Cruz astronomer, said this initial discovery would lead the way for astronomers to find other TDEs and new dwarf galaxies.

"This discovery has created widespread excitement because we can use tidal disruption events not only to find more intermediate-mass black holes in quiet dwarf galaxies but also to measure their masses," Foley said in a scientific paper co-published on Nov. 10.

"Over 24 months of YSE operations we observed only one AT 2020neh-like event, monitoring fields for approximately 6 months each. This equates to one event per year within the YSE observational volume," the scientific paper reads.

These unique discoveries could result in even more discoveries in distant galaxies that would otherwise be undetectable without visible light from the explosion.