Tennessee Titans offensive lineman Dennis Kelly set a record in the AFC Championship game against the Kansas City Chiefs with his touchdown catch in the second quarter.

Ryan Tannehill threw a 1-yard touchdown pass to Kelly to give Tennessee a 16-7 lead early in the frame.

Kelly became the heaviest NFL player to catch a touchdown in the playoffs with the score, CBS broadcaster Jim Nantz announced during the game. Kelly is listed at 6-foot-8, 321 pounds.

The 30-year-old offensive tackle also had a touchdown catch in the regular season. He caught a pass from Tannehill against the Jacksonville Jaguars in Week 12.

Titans coach Mike Vrabel has been no stranger toward using different players to score touchdowns. Vrabel played linebacker for the New England Patriots and the Chiefs during his career. He caught 10 touchdown passes in the regular season and two in the playoffs. 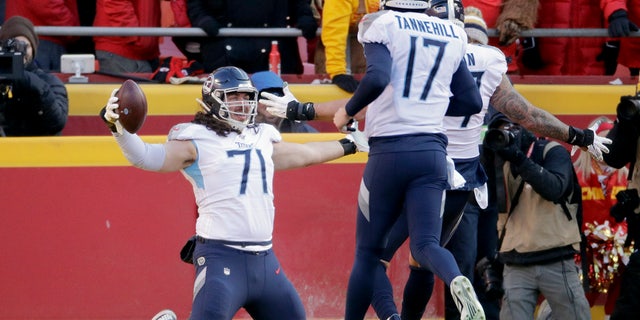 Tennessee Titans' Dennis Kelly (71) celebrating his touchdown catch with quarterback Ryan Tannehill (17) during the first half of the NFL AFC Championship game against the Kansas City Chiefs on Sunday. (AP Photo/Charlie Riedel)

Vrabel picked a perfect time to throw a wrinkle in his playbook, which caught the Chiefs off-guard during the game.

Kelly was wide open for the score, caught the pass and fell backward.

On the Trail of America’s First Women to Voter

A legendary woman, a trailblazer, an American hero -- Katherine Johnson

How to watch the Democratic debate in South Carolina

The Democratic Race, After Nevada

Michael Jordan at Kobe memorial: Now I’m going to have to look at another crying meme

‘Finally’: Ashley Judd and Other Weinstein Accusers Respond to Verdict

‘Sonic The Hedgehog’ China Release Date Postponed Due To Coronavirus

Deroy Murdock: Roger Stone vs. Andrew McCabe – With liberty and two-track justice for all

Harvey Weinstein accuser Caitlin Dulany responds to guilty verdict: ‘I have a renewed sense of justice’

Ozzie Areu, the first Latino to own a major studio, has a Hollywood story himself

Brady Skjei traded by Rangers to Hurricanes for first-round pick

What’s It Like to Be an Emergency Goalie in an N.H.L. Game?

How the New Emma Movie Updates the Relationship At Its Core

Help! I Want to Support My Friend—but She’s a Witch Who Tears Down My Christian Faith.

Harvey Weinstein accepted verdict ‘like a man’ — but will immediately appeal: lawyers

Coronavirus could cause U.S. drug shortages

WHO: Coronavirus Epidemic Is Not Yet Pandemic