Almost four in five Americans believe that if animals were able to talk like people, dogs would be the first to do so.

A poll of 2,000 adults revealed that 78% believe that hypothetically, dogs are more likely to start talking like a person, while 60% believe the same about cats.

More than half (53%) of respondents imagine their favorite pet would have a certain tone, accent or pattern of speaking.

One respondent said, “a sassy, southern accent and the tone changes depending on what she wants or needs.”

Others said “British” or “Boston” accents, while another said, “my previous dog would have had a low, monotone voice.”

Conducted by OnePoll on behalf of Healthy Paws, the survey also asked respondents about the perks and potential downsides of being able to have a conversation with our pets. 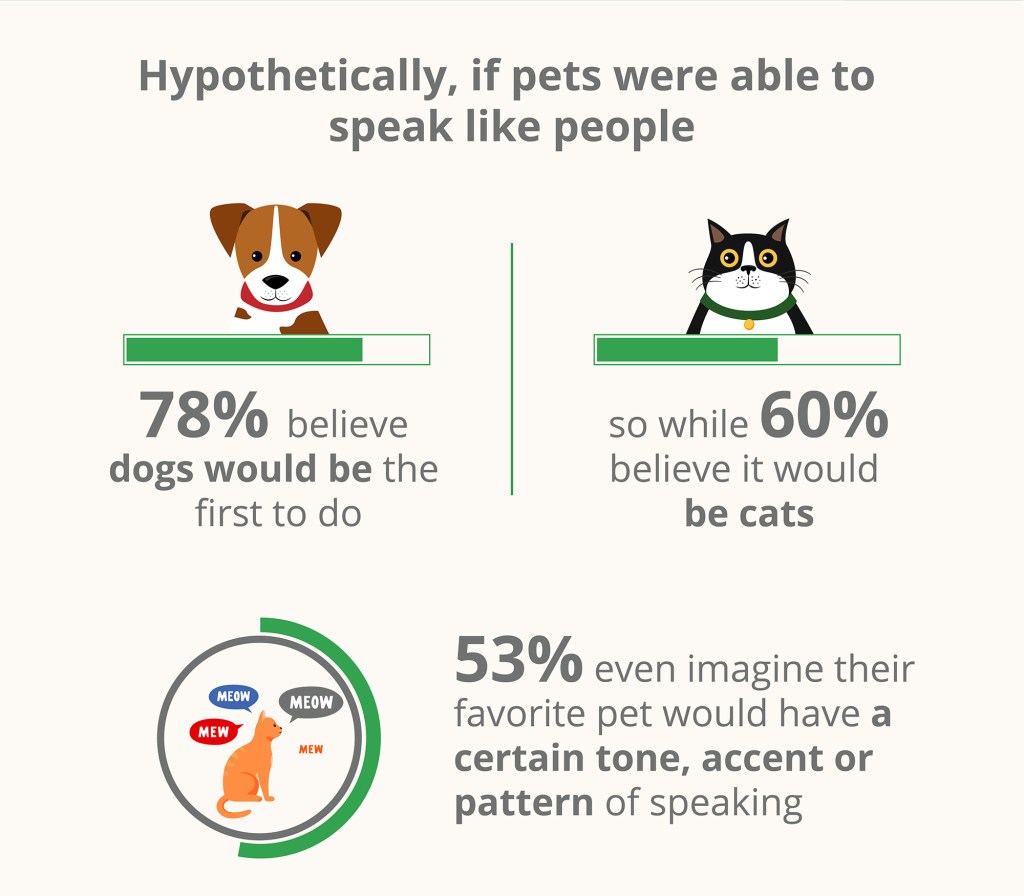 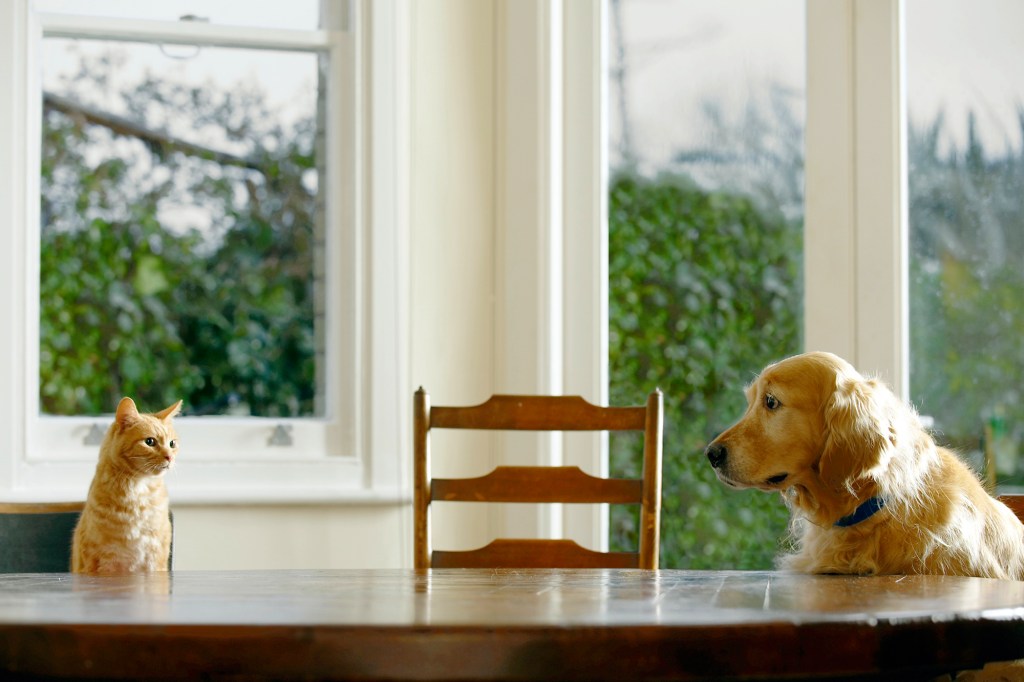 But for all the good chatting with our pets might bring, more than half (53%) are worried their pet would reveal secrets. 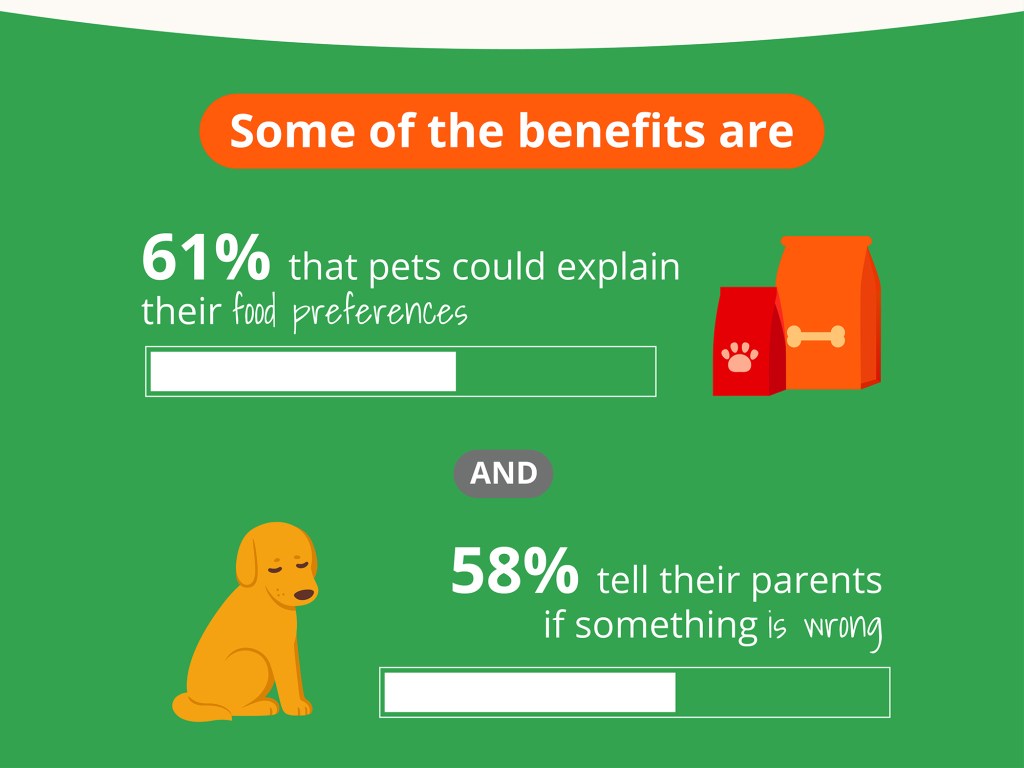 On top of that, 49% worry they wouldn’t stop talking and 46% are concerned they’d insult someone.

And if pets did start speaking, 22% would record it and 17% would scream or panic, while 15% would simply speak back. 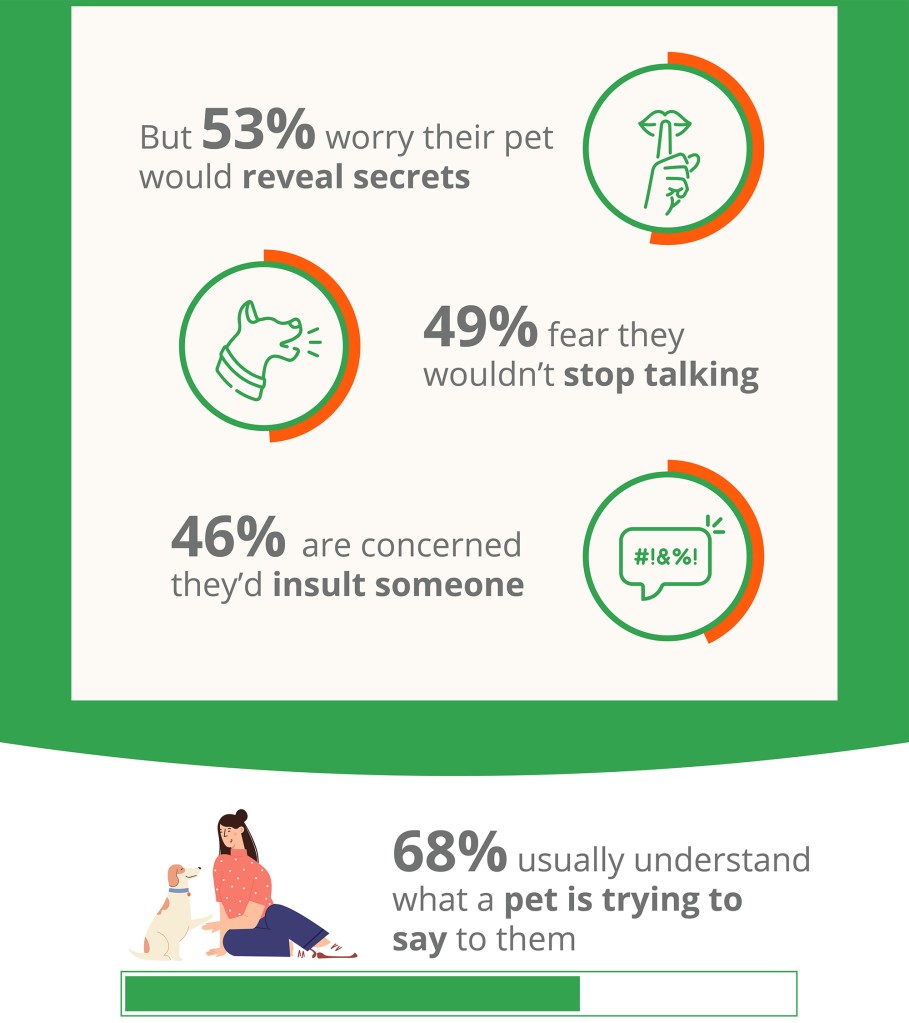 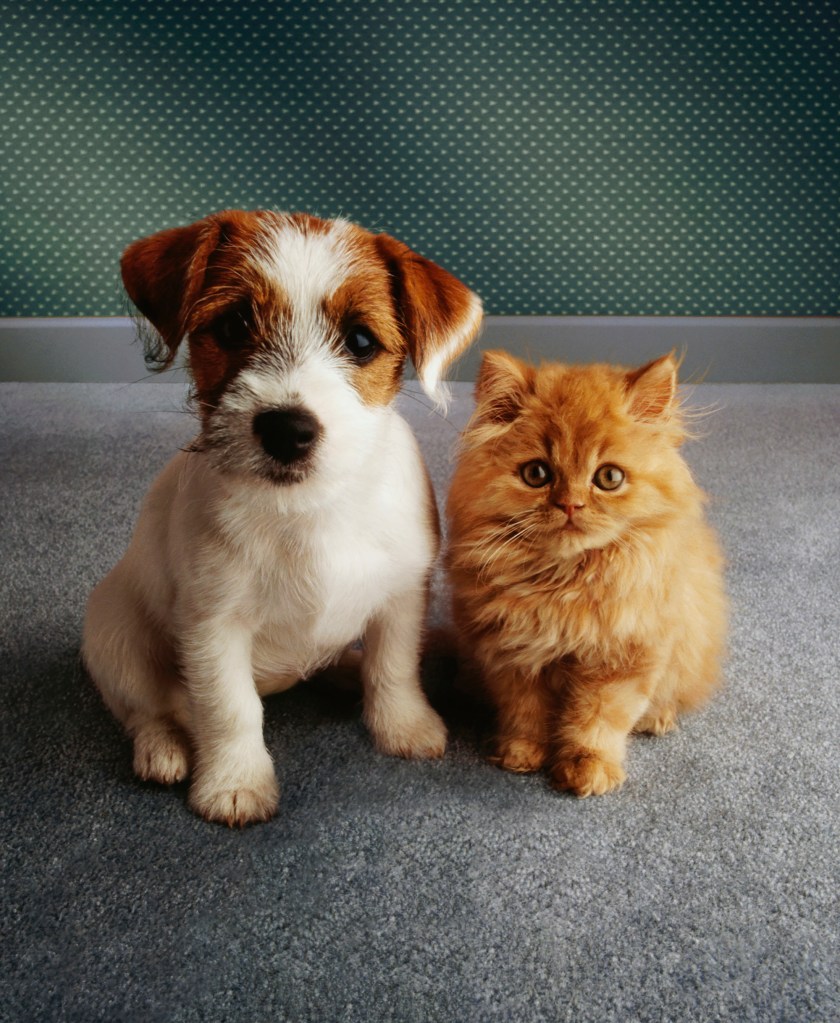 “It’s fun to speculate on what our pets might say and how they would sound, said Danette Johnston, a consulting dog trainer at Healthy Paws and owner of Dogs Day Out training center in Seattle, Wash. “But the important thing is to understand our pets are communicating with us all the time with their body language and vocalizations and it is up to us to learn their language.”

Respondents already feel pretty confident they can understand meows and barks as 23% said they “always” understand what a pet is trying to say and 42% “often” understand. 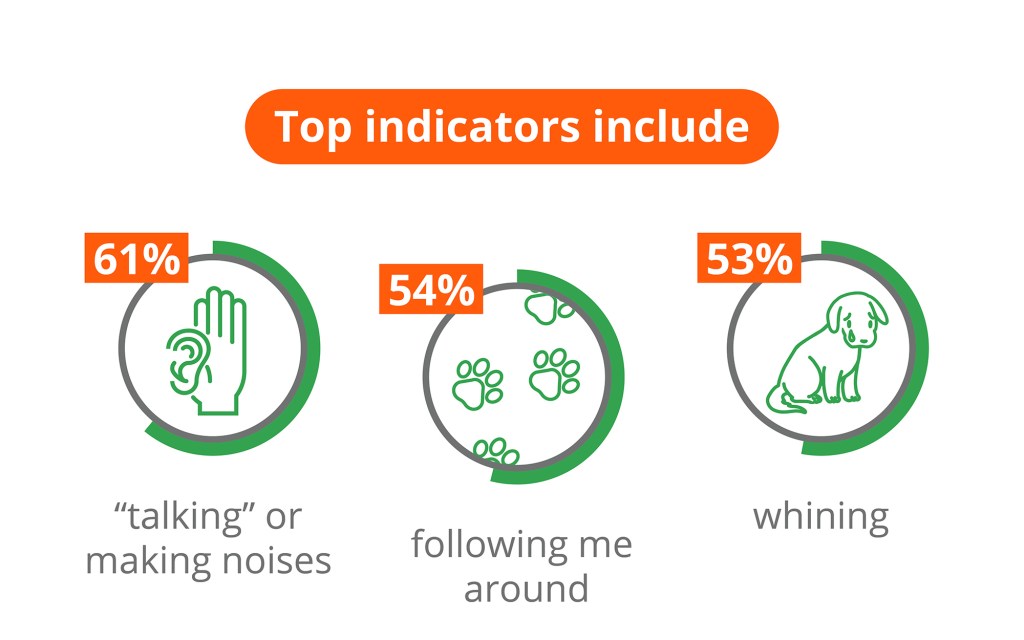 But it takes time for people to understand their pets, as the average respondent needs about three and a half years to fully understand how they communicate.

Half of respondents have worried that they’ll miss an injury or illness because pets can’t speak to us.

But respondents look for ways to tell if their pet isn’t feeling well like lack of appetite (52%), restlessness (51%) and fatigue (50%). 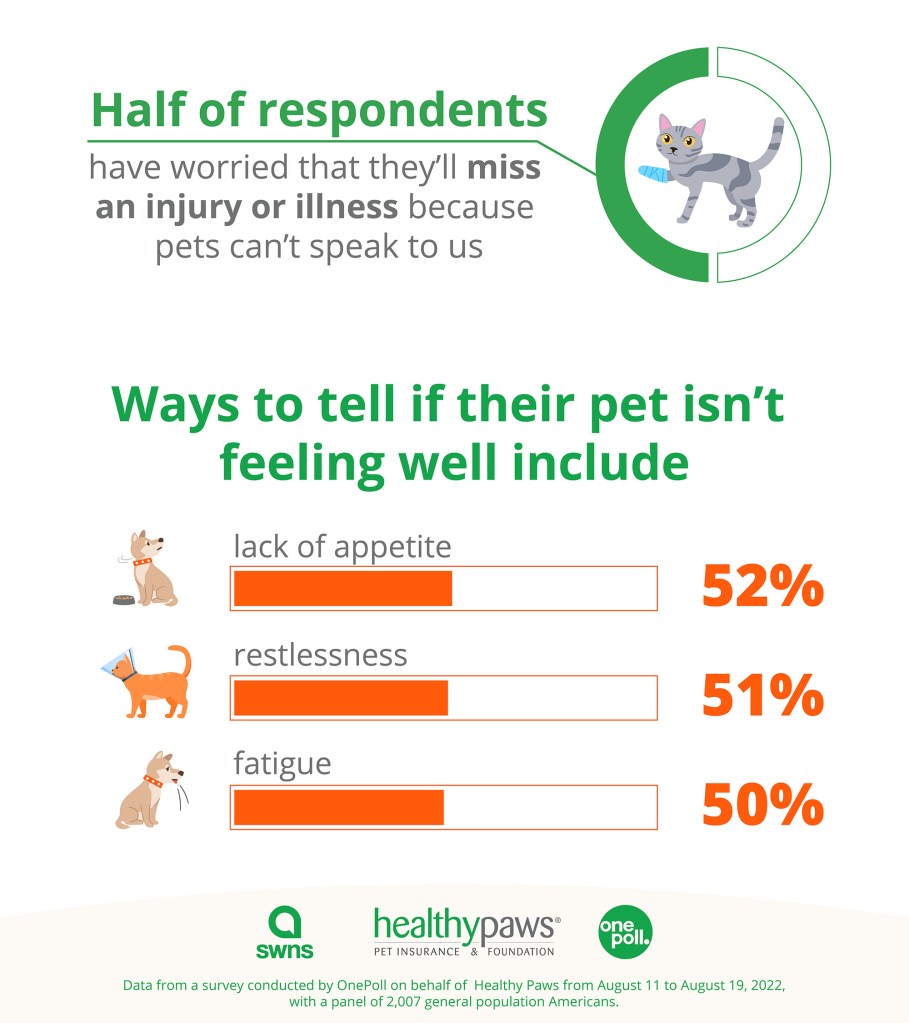 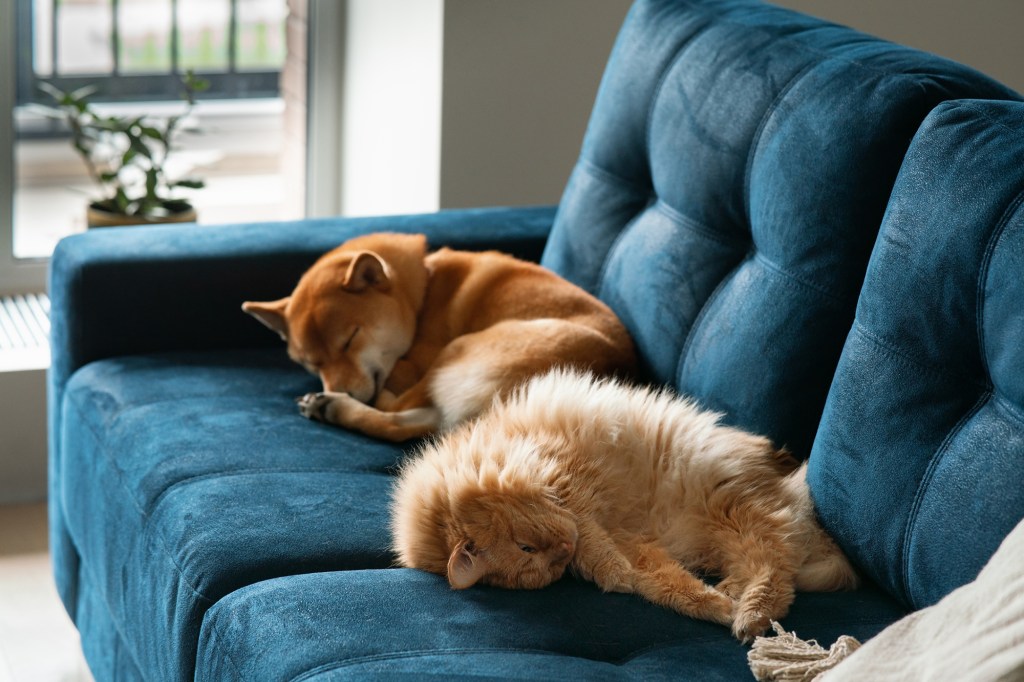 Overall, 82% of respondents agree that those who consistently have pets have a better understanding of them.

“While pets may not be able to speak with us verbally, it’s up to us as pet parents to learn when they are trying to tell us something important,”said Rob Jackson, founder and chief pet protector for Healthy Paws Pet Insurance. “Look for signs your pet isn’t feeling well, such as lethargy, lack of appetite, trouble passing stool, diarrhea, vomiting, or limping. If any of these conditions persist for more than a few hours, get them to a veterinarian to resolve any issues before they worsen. And, of course, regular vet visits are always recommended to track your pet’s general health and to keep them up-to-date on vaccines or other preventatives.”