Even before prosecutors announced they were likely shipping Ghislaine Maxwell to the the scandal-plagued New York lock up where her pedophile pal Jeffrey Epstein died in custody last summer, alarm bells were pealing over her safety.

“I’m absolutely worried for Ghislaine’s safety,” said Christopher Mason, a journalist and TV presenter who is appearing in “Surviving Jeffrey Epstein,” a Lifetime documentary series beginning next month. “I kind of don’t believe he [Epstein] committed suicide… His death seemed exceedingly convenient for many.”

Those concerns are likely gripping Maxwell herself, according to a lawyer for some of Epstein’s victims, who predicted that the perv financier would die in jail last year.

“It may be that she can’t handle the fear of what’s going to happen to her and takes matters into her own hands or there will be people who are very afraid of what she has to say,” said Spencer Kuvin in an interview last week with the Daily Mail. “She knows too much.”

Epstein’s apparent hanging in his cell on August 10 sparked a storm of controversy.

There were also competing autopsy reports, with one suggesting that Epstein did not die by hanging but was the victim of a homicide.

More than a year after Epstein’s death, it’s still not clear what exactly happened to him in his cell in the hours before he died.

The events that preceded the death of Jeffrey Epstein were “a perfect storm of screwups,” said US Attorney General William Barr. They actually began weeks before he was found unresponsive in his cell on the morning of August 10, and date to July 23 at 1:27 a.m. when Epstein was found on the floor of his cell in a fetal position and with bruises around his neck in what authorities said was an attempted suicide.

His cell mate at the time — a former cop charged in a quadruple homicide — claimed to have saved his life when he alerted prison guards. Nicholas Tartaglione, 51, said through his lawyer that he had become “good friends” with Epstein and denied previous news reports that he had beaten him in their cell.

Epstein was immediately placed on suicide watch on July 23, and by July 30 that watch was moved to “heightened psychological observation” which required that he have a cell mate, and guards monitoring him every 30 minutes.

But on August 9, an unidentified cell mate was removed from Epstein’s cell and transferred to another facility. At 7:49 p.m., Tova Noel, a 31-year-old federal prison guard returned Epstein to his cell after a meeting with one of his attorneys.

Noel had started work at 4 p.m. and was doing a double shift. She had already worked several overtime shifts at the prison that week, and by 10 p.m. she reported that the prisoners in 9-South, a special wing of the facility which housed inmates in protective custody, were locked in their cells for the night.

Noel was supposed to conduct an inmate count, but surveillance video showed that she and another unidentified guard failed to do so.

By midnight, Noel was joined by Michael Thomas, 41, another prison guard. During the night, Noel and Thomas surfed the internet and shopped for motorcycles and furniture, court documents say. At one point, both dozed off for two hours, according to surveillance video. They did not check in on Epstein as required, and later reported their negligence to a supervisor.

At 6:30 on the morning of August 10, the guards discovered Epstein unresponsive in his cell when they went to take him a tray of breakfast. In the minutes before a call was placed to emergency responders, MCC staff tried to revive Epstein, according to the Bureau of Prisons.

Epstein was taken by ambulance to New York Presbyterian-Lower Manhattan Hospital by members of the FDNY and other emergency responders at about 7:30 am. As he lay on a gurney in his orange prison jumpsuit, seemingly lifeless, his pale, ashen face nearly matching the color of his white hair, and surrounded by FDNY, police and EMTs, New York Post photographer William Farrington snapped Epstein from a distance as an EMT used a purple breathing apparatus in an attempt to revive him.  The image shocked the world — showing the most notorious pedophile in modern history in the moments before his death.

The photo immediately sparked conspiracy theories that Epstein had been felled by the powerful forces that wanted him silenced. An internet meme — “Jeffrey Epstein didn’t kill himself” — exploded on social media and many observers noted that he had died less than a day after a tranche of more than 2,000 documents containing lurid testimony from his sex-abuse victims was unsealed in a case involving Maxwell.

As soon as the Federal Bureau of Prisons confirmed his death, the Justice Department announced an investigation by both the FBI and the Inspector General. Barr said he was “appalled” by the turn of events.

Within a day of those comments, the MCC prison warden  Lamine N’Diaye was reassigned to a regional office pending the two investigations, and the two federal guards tasked with watching over Epstein were immediately placed on administrative leave.

In addition to the government probes into his death, Epstein’s brother Mark hired former medical examiner Michael Baden to accompany the autopsy at the city’s Office of the Medical Examiner. Baden had briefly worked as New York’s medical examiner in the late 1970s and led a panel that examined the assassination of President John F. Kennedy years earlier, and was often contracted by the families of victims who suspected foul play in their deaths.

On August 16, Barbara Sampson, the city’s chief medical officer, said in a brief statement that following “a careful review of all investigative information, including complete autopsy findings,” that Epstein had committed suicide by hanging.

Months later, on October 30, Baden made his own explosive analysis public. He found that Epstein had suffered a number of injuries, including a broken bone in his neck, that “are extremely unusual in suicidal hangings and could occur much more commonly in homicidal strangulation,” he said. 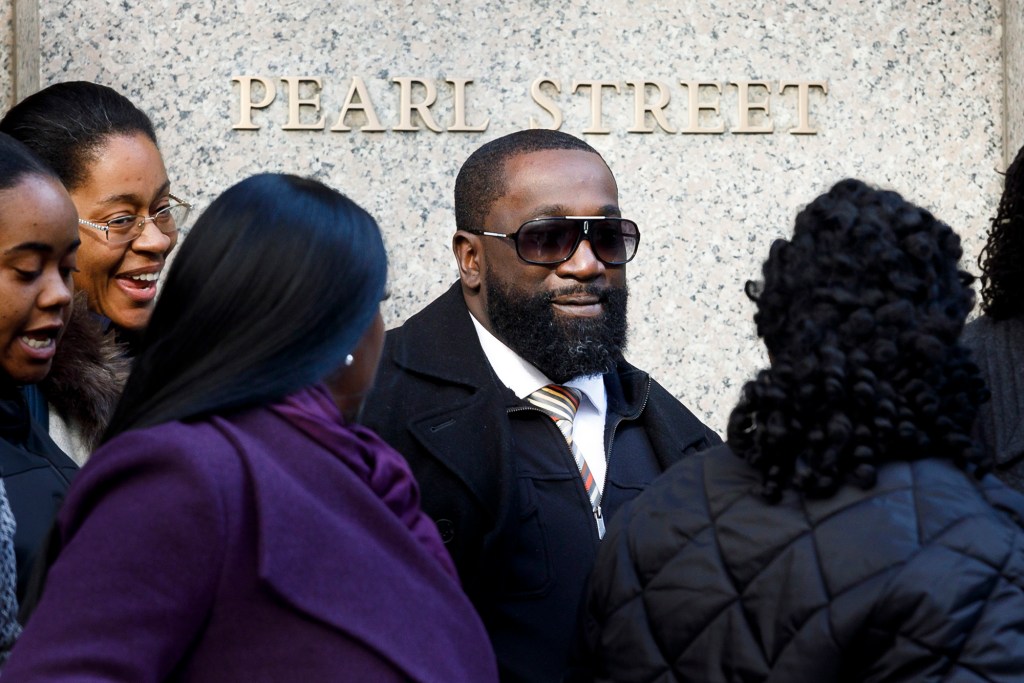 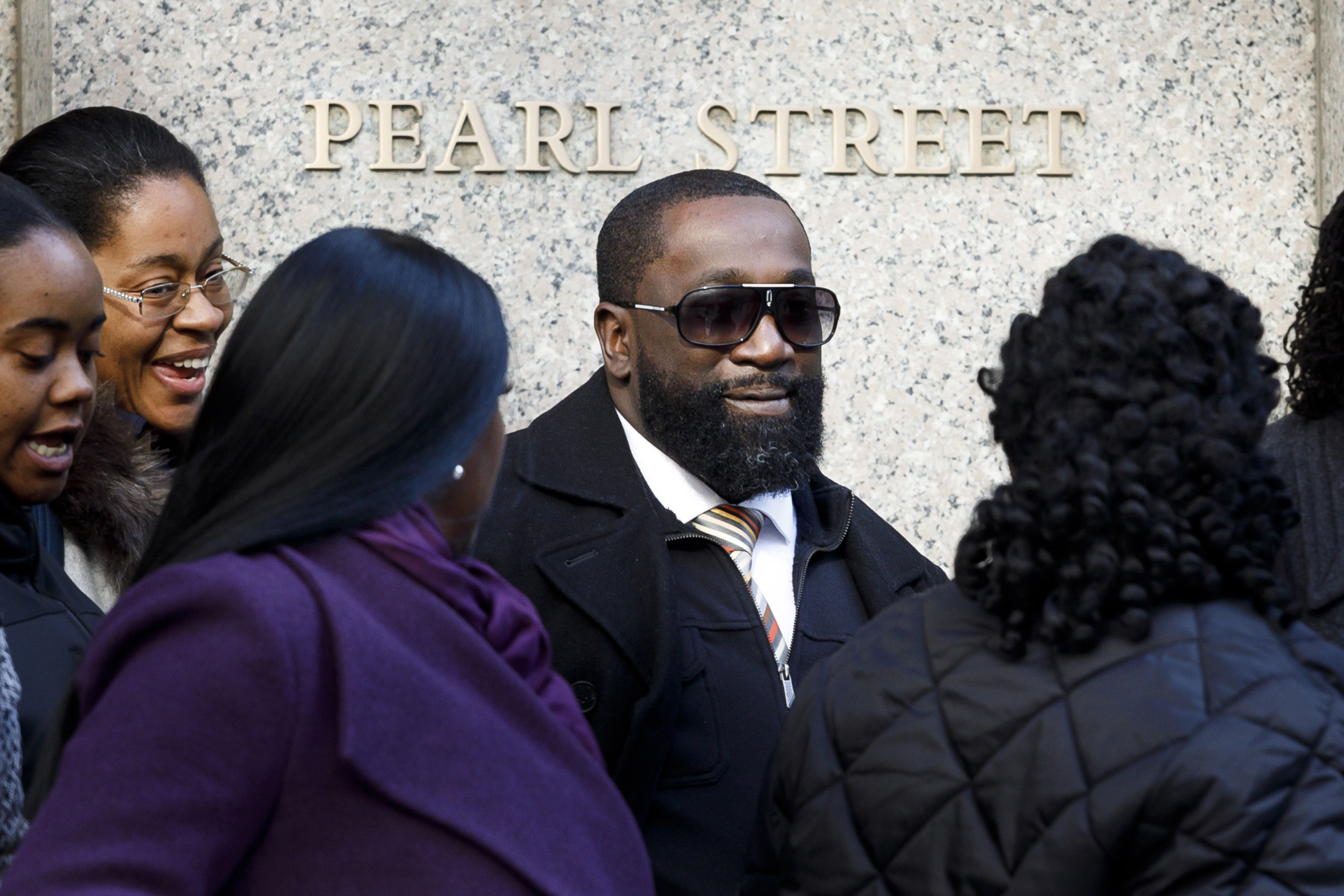 Michael Thomas, one of two correctional officers who was on duty at the Metropolitan Correctional Center when Epstein died. 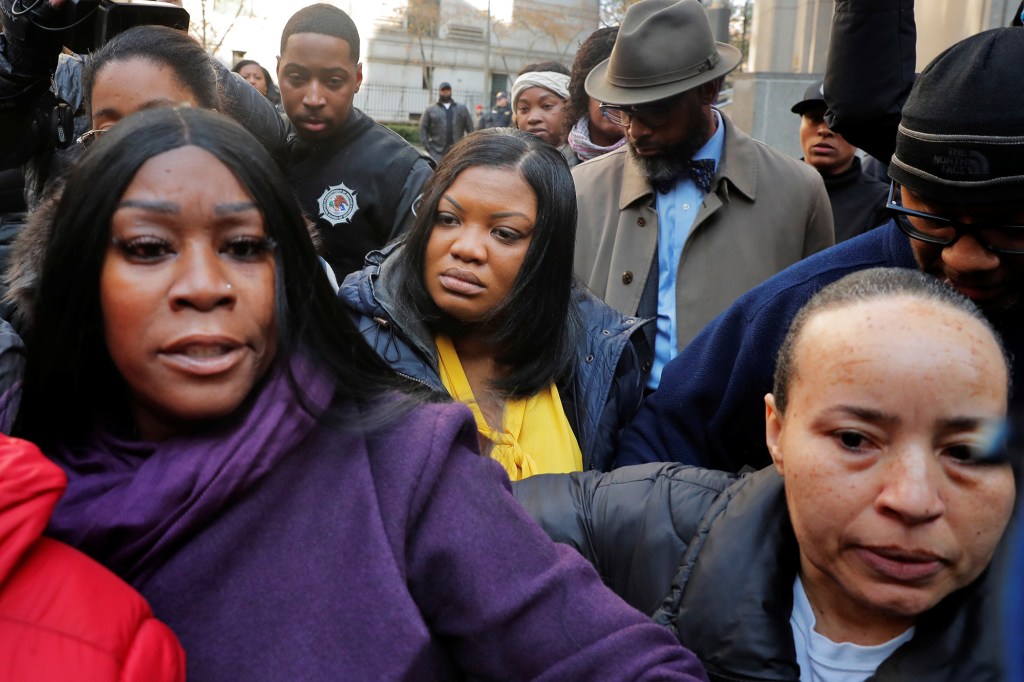 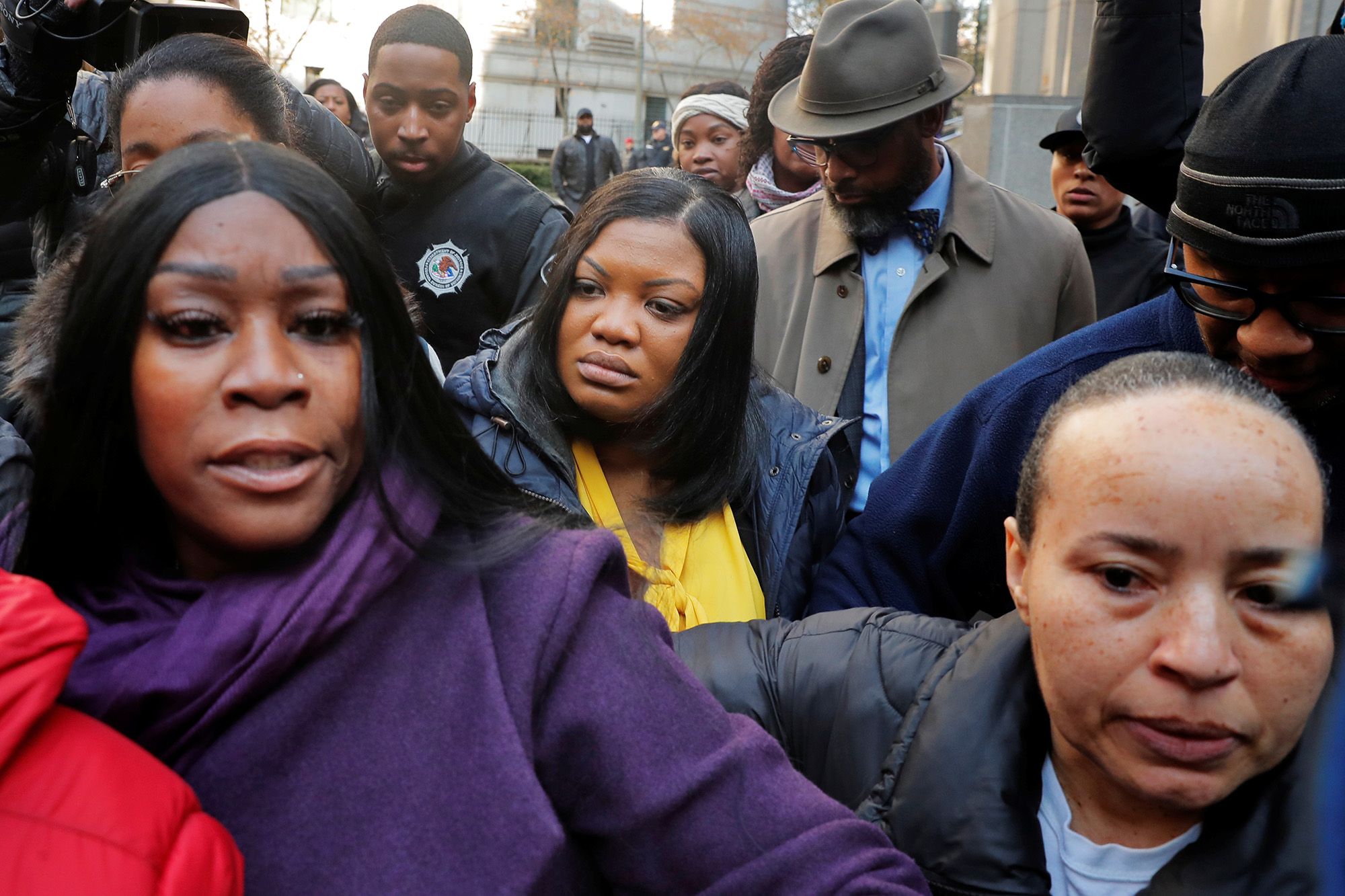 Tova Noel (center in yellow), one of guards at the time of Epstein's death.

“I think the evidence points to homicide rather than suicide,” said Baden, whose findings added fuel to the conspiracy theories that had been circulating for months.

At a federal prison oversight hearing in November, shortly after Baden’s findings were made public, Sen. John Kennedy, a Republican from Louisiana, said drywall, Christmas ornaments and Epstein were “three things that don’t hang themselves.”

“That’s what the American people think, and they deserve some answers,” he said.

“I stand firmly behind our determination of the cause and manner of death in this case,” she told the New York Times. “In general, fractures of the hyoid bone and the cartilage can be seen in suicides and homicides.“ The bone is near the Adam’s apple, where Baden said that Epstein suffered three fractures.

Baden had found that the hyoid bone had been fractured in multiple places, and he insisted that the injuries were consistent with strangulation.

On November 19, the US Attorney’s Office announced the unsealing of an indictment charging Noel and Thomas with “conspiring to make false records and to defraud the United States by impairing the lawful functions of the Metropolitan Correctional Center.”

“The defendants had a duty to ensure the safety and security of federal inmates in their care,” said then US Attorney Geoffrey Berman. “Instead, they repeatedly failed to conduct mandated checks on inmates, and lied on official forms to hide their dereliction.”

Both Noel and Thomas pleaded not guilty and their lawyers said that their clients were being made into scapegoats for the mismanagement of the federal prison system that resulted in Epstein’s death.

Months after Epstein’s death, new questions arose. In January, the FBI found that surveillance video taken from outside Epstein’s cell during his first suicide attempt on July 23 had been erased.

The MCC “inadvertently preserved video from the wrong tier within the MCC and as a result, video from outside the defendant’s cell on July 22-23, 2019 no longer exists,” court papers say.

What happened to the video, and what is the explanation for the broken bones that Baden found in Epstein’s neck?

Like Epstein before her, Maxwell, 58, is widely expected to name names and expose powerful captains of industry, world leaders and even royalty in her defense. “She of all of those people knew who slept with whom, and who was assigned to whom,” said Mason.

Maxwell, the youngest daughter of disgraced British press baron Robert Maxwell, faces six felony counts of child sex-abuse in the indictment against her which alleged that she schemed with Epstein and lied about trafficking women, some as young as 14, between 1994 and 1997.

The charges include alleged sex crimes in her London townhouse where Prince Andrew has separately been accused by an Epstein “sex slave” of sleeping with her multiple times, beginning when she was 17.

Although some are worried about Maxwell’s detention at the same decrepit facility where Epstein died, at least one of her old friends isn’t overly worried.

“Whatever happens to Ghislaine Maxwell I hope there is justice for the victims,” said Christina Oxenberg, a writer and Serbian royal who has known Maxwell for years. “I think the greater risk is that her connections work for her and she walks.”

Borussia announced that Sancho is staying. He extended his contract until 2023 a year ago
Inter is ready to pay 20+5 million euros for Smalling
Lewandowski is the best player of the week in the Champions League. He was ahead of Messi and Ronaldo
The Leipzig – Atletico match will not be rescheduled, despite the coronavirus in the Madrid players
Yannick Ferreira Carrasco: Atletico deserved to win the Champions League after two defeats in the finals
Sancho flew with Borussia to the training camp. He will probably not move to Manchester United
Bayern have unveiled their Champions League uniforms
Source https://nypost.com/2020/07/04/questions-that-still-need-answering-about-epsteins-death/

'We will not cower from it': Jim Harbaugh uses data to support claim that football should be played

What's The Risk Of School Lunch In A Classroom?

A devastating indictment of the Republican Party from a GOP insider

How to Shape Your Corporate Social Responsibility Around COVID-19

Homes explode in Baltimore, killing 1 and injuring 3 others

Opinion | Have Female Reporters Got Trump on the Run?

Porsha Williams is putting it ‘all on the line for change’

Lebanon's Government Is Stepping Down After Deadly Blast

Gretchen Whitmer for VP? Here are pros, cons of putting her on Biden ticket

Chicago Public Schools proposes $8.4 billon budget for 2021 as it copes with financial impact of COVID-19

Downtown businesses on edge after this morning’s looting, vandalism. ‘It’s definitely a setback.'

Trump Says Subpoena for His Tax Returns Is Illegal ‘Harassment’

Thousands Of Live-Event Workers In The U.S. Now Unemployed

Hallmark movie to feature lesbian wedding — but not everyone's celebrating

Gandhi’s glasses surface after being left in mailbox

How Women Used Their Domestic Power to Influence the American Revolution

Woman ‘bumped’ by 8-foot shark after swimming into its path

Stars are trading their shirts for scarves this summer

Morocco’s horses at risk of starvation as tourism collapses

3 men charged with murder in shooting death of Evanston man at his own birthday party, prosecutors say

Trump urges Portland to bring in National Guard amid unrest, warns officials they will be 'held responsible'

Kayleigh McEnany: 'No one should be fighting over wearing a mask'

Stocks on Wall Street drift from small gains to losses