On J&K 'Accession Day', the BJP in Jammu and Kashmir led a 'Tiranga (flag) march' protesting PDP chief Mehbooba Mufti' comments when she said that until the J&K flag, constitution and status (as under Article 370) are restored, she would not raise the national flag. 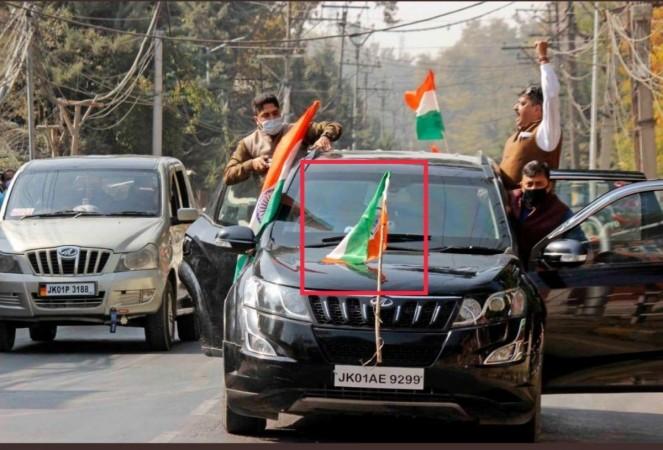 National flag placed on vehicles during the flag marchTwitter

A user on Twitter posted that one of the Indian National Flags placed on the vehicles that were a part of the march, had one of the flags placed upside down.

He posted, "Hello @BJP4JnK Waving hand One of the Indian flag on the car is upside down. Not sure if your karyakartas or your digital team knows about it."

A user posted, "They've had their thinking, upbringing and mentoring upside down all their life. The upside down flag is just a minor manifestation of that."

In a faux pas during Monday's rally, the Kashmir unit of BJP hoisted the national flag on a vehicle upside down, according to reports. With the green at the top and saffron at the bottom, the inverted national flag was attached to the bonnet of a black SUV in which BJP's Altaf Thakur was travelling during the Tiranga rally from Tagore Hall to SKICC on the banks of Dal Lake. The mistake was widely circulated via videos on social media here.

A Twitter user however stated that the image might be photoshoped and wrote, "Bhakts photoshop hai ...!! Danda left side hona chayeh tha ...!," signaling that someone photoshoped the image.

There were two flag marches; one in Srinagar and another in Jammu. There were several bulletproof cars with a heavy security presence. J&K BJP's Twitter account shared pictures of the march and it was seen that police jeeps accompanied at least a dozen cars in the convoy with each vehicle flying the Indian Flag.

It was also reported that for hoisting the national flag at clock tower in Srinagar, three persons, claiming to be BJP workers from J&K's Kupwara district, were detained. Out of the three arrested, one was quoted as saying that "Tell this to Mehbooba Mufti. I will hoist the (national) flag in every part of Kashmir."

A group of young men also tried to hoist the tricolor on top of PDP office. "Tiranga ka apmaan nahi sahenge (we will not tolerate insult of the tricolour)", was being chanted by these men.

Mourinho before the match with Chelsea: Tottenham are not afraid of anyone
Guardiola on the schedule: Players lose the joy of football. This is a problem
Solskjaer about Manchester United: We didn't start the Premier League like the others, because of the European Cup and pre-season, which we didn't have
Why is soccer called soccer in the United States (and not only there)? Is it true that this name was invented by the British?
Ole Gunnar Solskjaer: We look at Manchester United through the lens of history. We want to attack and dominate
Koeman on the crisis: We must help Barca in the name of our love for her. We need to think about what's best for the club
Bayer midfielder Bailey named son Leo Cristiano: This has nothing to do with football at all
Source https://www.ibtimes.co.in/tiranga-upside-down-jk-bjp-accession-day-march-draws-online-criticism-details-829723

Giants vs. Bengals: Preview, predictions, what to watch for

On Tennyson Street in Denver, mom-and-pop shops are dying amid Covid-19

David Limbaugh: After years of attacking Trump and his supporters, Democrats now ask for unity

Bah, Pandemic! How Theaters Are Saving ‘A Christmas Carol’

The Latest: Hong Kong to close schools amid virus surge

'Good riddance': Tech's flight from San Francisco is a relief to some advocates

More than 91,000 people -- the most of the pandemic -- are hospitalized with coronavirus in the US

Mets, Steve Cohen biding their time: ‘Lots of irons in the fire’

Americans increasingly turning to fresh Christmas trees during pandemic: 'It really is a memory maker'

David Prowse, the man behind Darth Vader, dead at 85

Was Chopin gay? The awkward question for right-wing Poland

Was Chopin gay? The awkward question in one of the EU's worst countries for LGBTQ rights

Catch a lunar eclipse during the full beaver moon this weekend

The College Athletes Who Are Allowed to Make Big Bucks: Cheerleaders

Everyone Who's in the Running to Take Over For Alex Trebek on Jeopardy!

Jets could pick up first win vs. Tua Tagovailoa-less Dolphins

Pakistan Selects Busan Winner ‘Circus of Life’ For the Oscars

Nate Robinson gets destroyed by Jake Paul in his boxing debut

In Santa’s Mailbag, a Peek into Children’s Pandemic Worries

'Frontline Battle' between Mike Tyson and Roy Jones Jr. ends in a draw

Rajnikanth's political agenda to be revealed on Nov 30; superstar to host meeting

Mike Tyson returns to ring, draws in exhibition with Jones

Most Shazamed song of all time revealed

Denver Broncos Have No Quarterbacks Available For Sunday Game, As All Three Stricken With Covid-19

Analysis: Pressure builds on US Congress to help states with vaccine needs

Pressure builds on Congress to help states with vaccine needs

Some eager explorers have already hiked into the desert and found the Utah monolith. Spoiler alert: it's gone now